PRINCETON, NJ -- U.S. Hispanics and Asians are much less likely to be registered to vote than whites or blacks. Whereas more than eight in 10 blacks and whites are registered, and therefore able to vote in elections, 60% of Asians and barely half of Hispanics are currently able to participate in the electoral process. 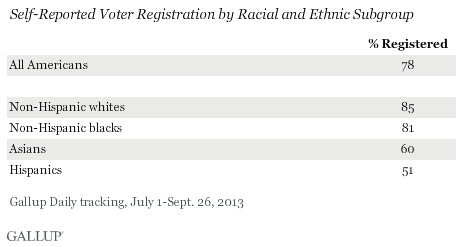 The results are based on Gallup Daily tracking interviews conducted from July 1-Sept. 26, and include interviews with more than 4,000 Hispanics and 1,000 Asians.

Asians and Hispanics in large part have lower rates of voter registration overall because many members of these racial and ethnic groups were not born in the United States. When it comes to voter registration, where one is born seems to make more of a difference than one's racial or ethnic background. That could be largely because many non-native-born people living in America are not U.S. citizens, and thus unable to register. 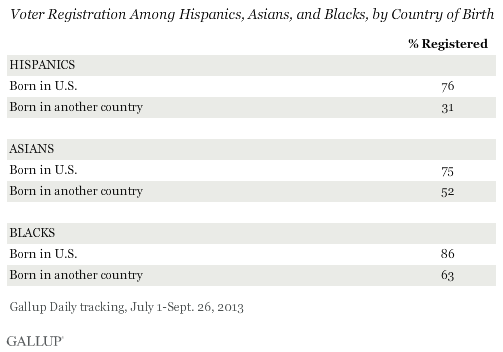 In the Gallup data, 49% of Hispanics and 57% of Asians say they were born in another country, driving down their overall voter registration rates. By comparison, 9% of blacks are foreign born.

But cultural factors, such as language, may play a role beyond nativity, because both U.S. and foreign-born blacks are registered to vote at higher rates than their Hispanic and Asian counterparts. 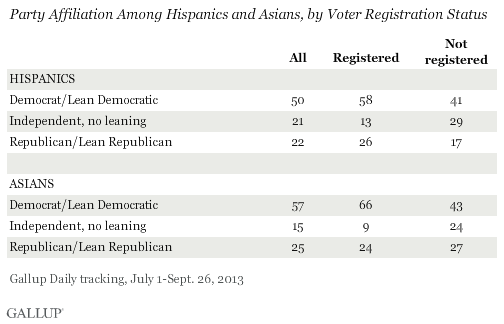 The causal direction between party preference and being registered to vote is not clear from these data -- whether Hispanics and Asians who are more politically interested, and more loyal to the Democratic Party, are more likely to become registered, or if, once Asians and Hispanics register, it activates latent Democratic tendencies in them.

Regardless, greater electoral participation by Hispanics and Asians would work to the Democratic Party's benefit.

At least in the case of Hispanics, for which there are sufficient data to do the analysis, the stronger Democratic tilt among registered voters appears to be unrelated to where they were born. That is, registered Hispanics born in the U.S. or outside the U.S. have similar -- decidedly Democratic -- political leanings. Likewise, nonregistered Hispanics tend to have similar party preferences regardless of where they were born, with a much stronger independent orientation. 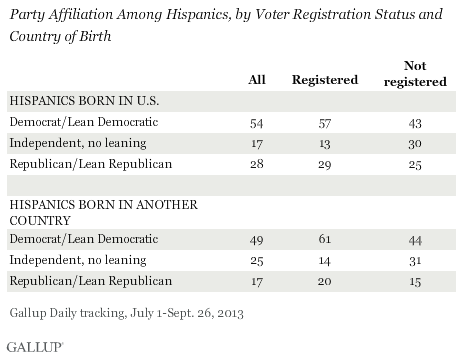 The shrinking white majority and expanding minority population in the United States in theory should benefit the Democratic Party if prevailing political preferences among Hispanics and Asians persist. However, winning elections requires not just having an advantage in preferences, but also sufficient voter participation. The first step in achieving the participation levels needed to win is getting a given party's supporters to meet the legal requirement to vote -- namely, to register to vote where they live.

Thus to maximize the demographic trends, Democrats would need to focus on increasing voter registration among Hispanics and Asians. As of now, with only half of Hispanics and six in 10 Asians registered to vote, a large number of potential Democratic votes are left outside the political process. A significant challenge for the Democratic Party in increasing Hispanic and Asian voter registration overall is getting non-native-born Hispanics and Asians to register to vote. These immigrants, particularly Hispanics, are registered at very low rates, perhaps due to a lack of assimilation into the United States, including citizenship, and may not have a strong inclination to get involved in the political process.

For the Republican Party, the challenge is to alter the party's appeal to emerging minority groups and persuade Hispanics and Asians to support its platform and candidates. Having high-profile Republican candidates from these minority groups, such as Florida Sen. Marco Rubio and Louisiana Gov. Bobby Jindal, could help in that regard. In fact, both Rubio and Jindal are considered potential 2016 Republican presidential candidates, and if they run, could bring more Hispanics and Asians into the voting process and make them more inclined to support Republican candidates and ideals.

Results for this Gallup poll are based on telephone interviews conducted July 1-Sept. 26, 2013, on the Gallup Daily tracking survey, with a random sample of 43,825 adults, aged 18 and older, living in all 50 U.S. states and the District of Columbia.

For results based on the total sample of 4,072 Hispanics, one can say with 95% confidence that the margin of sampling error is ±2 percentage points.

For results based on the total sample of 1,008 Asians, one can say with 95% confidence that the margin of sampling error is ±4 percentage points.