WASHINGTON, D.C. -- Americans were much more upbeat about the U.S. economy in November than they were in October, but are still less confident than they were in the months before the federal government shutdown. Gallup's Economic Confidence Index averaged -25 in November, improving from -35 in October but still below the -19 found in September. November is the first month that the index has improved since May, when it peaked at -7. 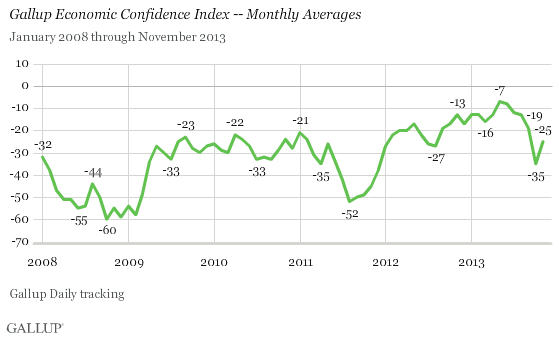 The November results are based on Gallup Daily tracking interviews, conducted by landline and cellphone, with more than 14,000 U.S. adults.

Gallup's Economic Confidence Index is based on two components: Americans' assessments of current economic conditions in the U.S. and their perceptions of whether the economy is getting better or worse. The outlook component, which took the greater hit during the shutdown, improved more than the current conditions component last month.

The net economic outlook score last month improved significantly to -27 from -40 in October, but is still nine points off from September's score. The November score represents 34% of Americans who said the economy is getting better and 61% who said it is getting worse.

The net current conditions score rose to -23 in November from -30 in October, and is four points lower than in September. Last month, 16% of Americans said the economy was excellent or good, while 39% said it was poor.

Democrats, independents, and Republicans were much more positive about the economy in November than they were in October, when confidence fell across partisan groups. All three party groups showed similar increases in confidence in November, with Gallup's index up 13 points each among Democrats and independents, and up 10 points among Republicans.

Democrats' confidence returned to positive territory this month after falling below zero in October for the first time since January 2012. Overall, Democrats remain significantly more confident in the economy than independents and Republicans. 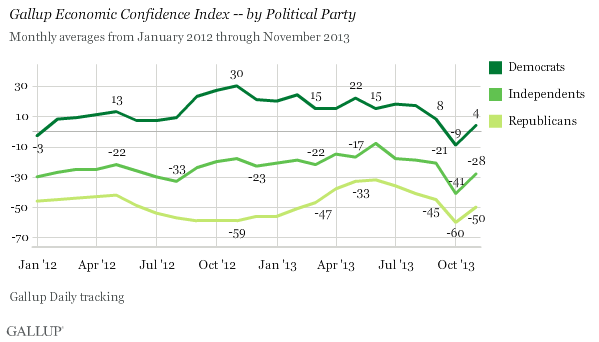 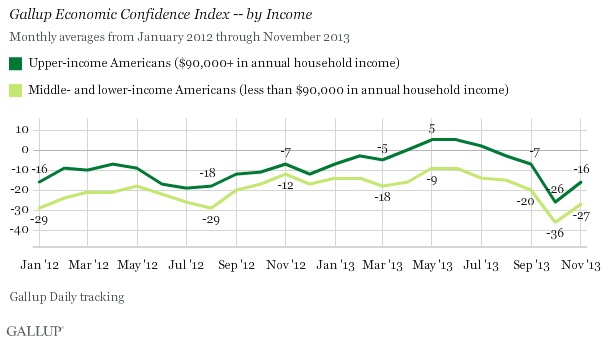 The October government shutdown profoundly affected Americans' economic confidence, and even more than a month after it ended, their confidence has not yet fully recovered. Still, the index's November improvement of 10 points shows that Americans' confidence is more resilient now than it was after the 2011 debt crisis and the 2008-2009 economic recession. While U.S. stock prices plummeted after those events, they set record highs in November, which may have boosted consumer confidence.

In addition to feeling more positive about the economy last month, Americans also reported spending slightly more than they did in October. These may be positive signs for holiday spending in the weeks ahead.

Results for this Gallup poll are based on telephone interviews conducted Nov. 1-30, 2013, on the Gallup Daily tracking survey, with a random sample of 14,285 adults, aged 18 and older, living in all 50 U.S. states and the District of Columbia.