PRINCETON, NJ -- Americans' average prediction for the total amount they will spend on Christmas gifts this season is now $740, midway between the $786 they estimated in October and the $704 in November. Given how the most recent prediction compares with previous years -- coming in below last year's $770 and falling well short of consumers' spending intentions in years prior to the 2008 financial crisis -- the 2013 holiday season will likely be a ho-hum one for retailers. 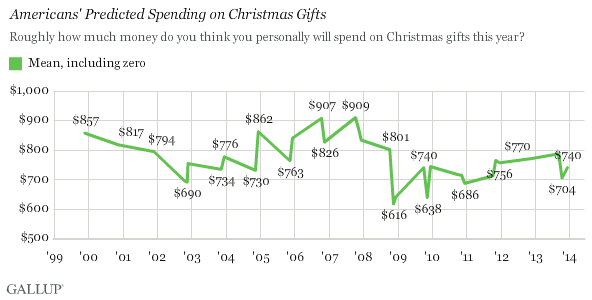 Gallup's modeling of the latest spending estimate, based on a Dec. 5-8 poll, suggests holiday sales will increase between 2.3% and 2.7% this year over 2012. That is just above the 1.7% to 2.4% range Gallup reported last month using the same modeling on consumers' November prediction. Although these levels may seem positive, they are less than the 10-year average increase of 3.3% (as calculated by the National Retail Federation), and below what retailers generally strive for.

The historical relationship between Americans' projected Christmas spending and actual holiday sales is not precise. Still, over the past decade, annual changes in Gallup's November and December forecasts have roughly paralleled changes in holiday sales. 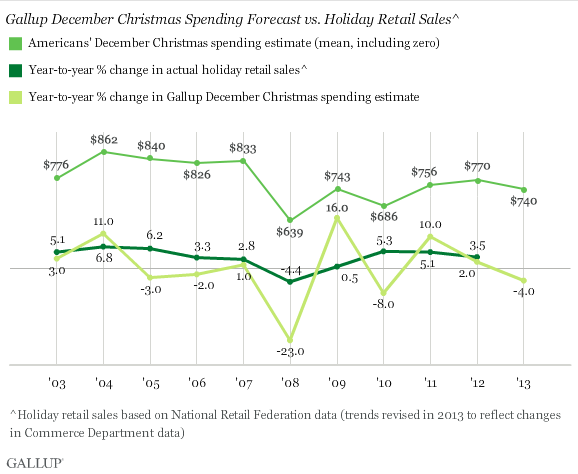 With just weeks left in the 2013 holiday shopping season, Americans, on average, now estimate they will spend $740 on Christmas gifts. That is in between their more positive October estimate and their less positive November estimate. While the December figure does not portend a terrible retail season, the year-over-year increase it suggests -- in the 2.3% to 2.7% range -- would be below par and would clearly indicate that consumers are operating with more of a recessionary mindset than one inspired by the soaring stock market or recent reports of improved economic growth.

For the mean (including zero) spending level based on the total sample of national adults, the margin of sampling error is ± $54 at the 95% confidence level.