WASHINGTON, D.C. -- The Gallup Economic Confidence Index dipped to -18 for the week ending Feb. 9 -- the lowest weekly reading so far in 2014. The index is similar to the -17 measured during the prior two weeks and January's monthly average of -16. Americans' confidence in the economy has been falling since it reached this year's weekly high of -13 in early January. The index was 10 points more positive in early February 2013 than it is now. 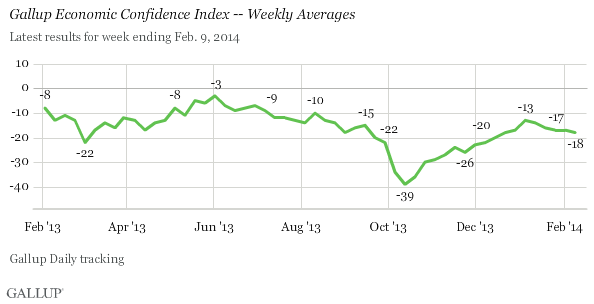 Americans' economic confidence dropped sharply in October during the federal government shutdown, but it slowly recovered through the end of 2013. Since then, however, confidence has declined modestly, which may be related to the rocky stock market.

Last week, 39% of Americans said the economy was getting better, while 55% felt it was getting worse. This resulted in a net economic outlook score of -16, slightly lower than in previous weeks and the lowest yet in 2014.

At the same time, 18% of Americans rated the economy as excellent or good, while 37% called it poor. This resulted in a net current conditions score of -19, similar to the -20 found the week prior and within the -17 to -20 range seen since the beginning of the year. 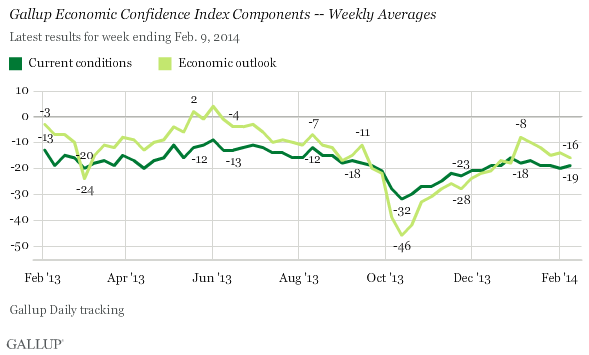 Gallup's Economic Confidence Index remains in negative territory, and the index last week extended the downward trend that began in early January. Americans are increasingly pessimistic about the future of the economy, while their views on current conditions are largely unchanged.

Results for this Gallup poll are based on telephone interviews conducted Feb. 3-9, 2014, on the Gallup Daily tracking survey, with a random sample of 3,038 adults, aged 18 and older, living in all 50 U.S. states and the District of Columbia.