skip to main content
Wellbeing
In U.S., 14% of Those Aged 24 to 34 Are Living With Parents

PRINCETON, NJ -- Fourteen percent of adults between the ages of 24 and 34 -- those in the post-college years when most young adults are trying to establish independence -- report living at home with their parents. By contrast, roughly half of 18- to 23-year-olds, many of whom are still finishing their education, are currently living at home. 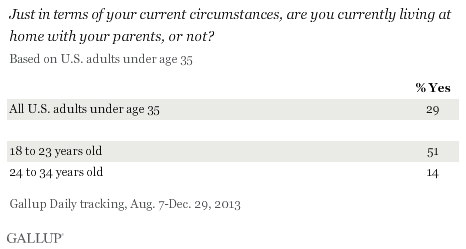 The results are based on Gallup Daily tracking interviews conducted from Aug. 7 through Dec. 29, 2013, in which adults younger than 35 were asked about their current living arrangements. This article focuses on the 14% who are beyond college age and living at home.

An important milestone in adulthood is establishing independence from one's parents, including finding a job, a place to live and, for most, a spouse or partner, and starting one's own family. However, there are potential roadblocks on the path to independence that may force young adults to live with their parents longer, including a weak job market, the high cost of living, significant college debt, and helping care for an elderly or disabled parent.

A statistical model that takes into account a variety of demographic characteristics indicates that three situational factors are most likely to distinguish the group of 24- to 34-year-olds living at home from their peers:

Being married is, by a large margin, the most important predictor of whether individuals between the ages of 24 and 34 live with their parents or have their own place. The vast majority of young adults living at home, 75%, are single and have never married, twice the rate among those of the same ages who are living on their own. A plurality, 46%, of those no longer living with their parents are married.

Being married may better explain why young adults move out of their parents' home than why single adults live at home. For those living at home, their situation may have more to do with their job or income status than their marital status. Being single, however, may make living with parents a more feasible option for young adults than it would be if they were married.

Employment status ranks as the second-most-important predictor of young adults' living situation once they are beyond college age. Specifically, 67% of those living on their own are employed full time, compared with 50% of those living with their parents. 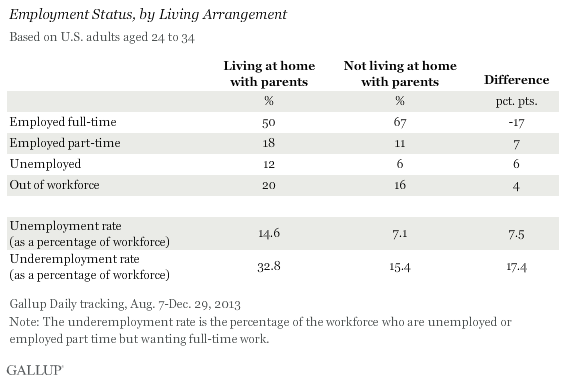 The underemployment rate, which combines the percentage unemployed with the percentage working part time but wanting full-time work, is 32.8% among those living at home and 15.4% among those living on their own. In other words, among young adults who live with their parents and are working or actively looking for work, nearly one in three are in a substandard employment situation.

Perhaps because of employment differences, those living on their own tend to report that they live in higher-income households. To some degree, that reflects the greater likelihood that those living on their own are married, and likely to have a second source of income from their spouse. Analysis of the effect of income on where young adults live is also complicated by the fact that Gallup measures income at the household rather than individual level, and income reports from those living under their parents' roof may include parental income as well as respondent income.

Twenty-four- to 34-year-olds living at home do not differ substantially from those of the same age living on their own in terms of gender, race, region, or prior military service.

A 2012 report from Ohio State University sociologists showed that it is increasingly common for young adults to live at home with their parents. The high costs of housing and a relatively weak job market are key factors that may force, or encourage, young adults to stay at home.

Perhaps it is comforting that by the time U.S. adults pass college age, the vast majority have left their parents' homes and found a place of their own to live. The biggest impetus for leaving home seems to be marriage, easily the strongest predictor of one's living arrangement among those between the ages of 24 and 34. This indicates that if the marriage rate increases in the future, the percentage living with their parents may decline. Earlier Gallup research suggests that most unmarried Americans do have a goal of getting married someday.

Also, those who have secured full-time employment or have earned college degrees are more likely to have gotten a place of their own to live. An improving job market and economy should lead to a decrease in the percentage of young adults living with their parents.

A key question is to what extent those living at home are better off or worse off than their contemporaries who are out on their own, and what implications that has for society in general and the economy in particular. Gallup will explore differences in well-being between young adults living with parents and those living on their own in an upcoming story.

Results for this Gallup poll are based on telephone interviews conducted Aug. 7-Dec. 29, 2013, on the Gallup Daily tracking survey, with a random sample of 3,445 adults, aged 18-34, living in all 50 U.S. states and the District of Columbia, who report they are currently living at home with their parents.

For results based on the total sample of 1,076 adults aged 24-34 who are living at home with their parents, the margin of sampling error is ±4 percentage points at the 95% confidence level.