WASHINGTON, D.C. -- More than a year after his unsuccessful presidential bid, 47% of Americans view Mitt Romney favorably. This is down slightly from the 50% favorability rating he had just after losing the election, but suggests Americans' views of the former Massachusetts governor haven't fundamentally changed. The latest results are from a Feb. 6-9 Gallup poll. Gallup first polled Americans on Romney's favorability in December 2006, when the majority had never heard of him or had no opinion. Those who had an opinion were slightly more likely to see him favorably (19%) than unfavorably (12%). During the 2008 and 2012 presidential campaigns, views of him were often mixed, with his favorable rating never exceeding 50% and his net favorable score (favorable minus unfavorable) topping out at +9 points.

As Romney rides a wave of publicity from the Netflix documentary "Mitt" and rebuffs suggestions from advisers, fundraisers, and swing-state polls that he could return for yet another presidential bid in 2016, Americans continue to be divided in their views of him.

America's Introduction to the Unfamiliar Candidate

Romney had relatively low name recognition as he began his bid for the 2008 Republican presidential nomination. Although he was the Republican governor of a Democratic stronghold and the son of a former Republican presidential candidate, Romney struggled to shine past decorated war veteran Sen. John McCain, and McCain's favorability consistently dwarfed his own. Once Romney withdrew from the race in February 2008, McCain's favorability surged to an eight-year high (67%).

But this unsuccessful attempt at the nomination left an impression on many Americans as they watched Romney succeed in 11 state primaries and caucuses, and as a result, Americans' familiarity with Romney had increased substantially by the time he withdrew from the Republican race. At that time, only 7% of respondents said they had "never heard of" the governor at that point -- down significantly from the 58% before he entered the race. Divided Favorability Ratings for the 2012 Front-Runner

The governor was much better known when he began his second presidential campaign. But this greater familiarity was not necessarily a plus. While Romney's favorable ratings grew, so too did his unfavorable ratings, which persistently seesawed throughout his time on the campaign trail in 2008 and 2012.

Romney announced his second presidential bid in June 2011, and by December of that year, his favorability had improved to 40%, with a 42% unfavorable rating. It fluctuated throughout his 2012 campaign, from 39% to 50% favorable, settling at 46% (with a 47% unfavorable rating) just days before Election Day. 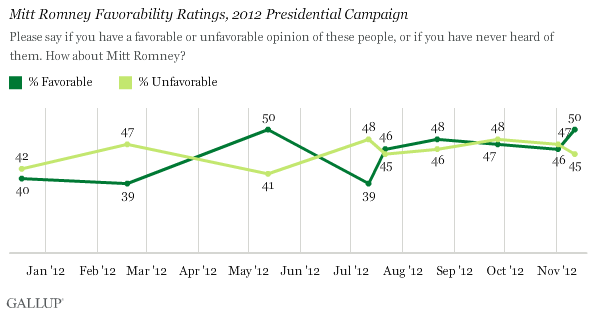 Though Romney has recently emerged from a quiet lull of post-election life, he has stated publicly that he does not intend to run for the 2016 Republican nomination.

Romney is no longer under the scrutiny he endured on the campaign trail and has returned to the public spotlight in recent weeks with the premiere of "Mitt," a film some critics felt humanized the candidate who was criticized for failing to connect with everyday Americans. He has also been widely quoted for his criticisms of the 2014 Sochi Winter Olympics. But despite this exposure, Romney hasn't enjoyed a bump in favorability.

Romney is marginally better off than John Kerry, who had a 42% favorability rating in the first post-2004 election poll about him in 2005 -- though Kerry was still a sitting member of Congress, an institution that historically has not received high approval ratings. McCain, who also remained in the Senate after his loss to Barack Obama in 2008, had a higher favorability rating of 54% a year after the election.

In U.S., Views of Obama, Democrats Improve After Election

Americans view Barack Obama and the Democratic Party more favorably now than they did before the election. Americans' views of the Republican Party are unchanged, and remain less positive than their views of the Democrats.

Mitt Romney speaks at the GOP convention with a 48% favorable rating, near his personal best but still below Barack Obama's 53%. A review of Gallup polling shows Romney also trails Obama on character ratings but leads on the economy.

Fifty percent of Americans have a favorable opinion of Mitt Romney, his personal high by 10 points. While this is one of the lowest favorables a presumptive nominee has had, it nearly matches Barack Obama's current 52%.