WASHINGTON, D.C. -- Americans still widely believe that civil rights for blacks have improved during their lifetime, but the 76% who say this is down from 87% in 2013. Meanwhile, the percentage of Americans who say the situation stayed the same or has worsened (23%) is the highest Gallup has ever found. These data are from a June 15-July 10 Gallup poll that asked American adults various questions about the state of civil rights for blacks in the U.S. The poll was taken after a year of high-profile deaths of young, black men at the hands of white police officers.

Americans were most positive about civil rights for blacks in 2011, when half said the situation had greatly improved and about four in 10 (39%) said they had somewhat improved. Only 11% said they had stayed the same or worsened.

Only a few years later, more than twice as many Americans (23%) feel civil rights for blacks have stayed the same or have worsened over the course of their lifetimes. Despite this record-high negative view, most Americans feel civil rights have gotten at least marginally better.

There have not been large differences in the percentages of whites and blacks who think black civil rights have improved either greatly or somewhat. But a closer look at the data shows that whites are more likely to fall into the "greatly improved" camp, while blacks tend to believe civil rights have "somewhat improved." Currently, 43% of whites say civil rights for blacks have improved greatly and 36% say somewhat improved, while among blacks, 21% say greatly improved and 49% say somewhat.

Meanwhile, blacks (30%) remain more likely than whites (20%) to say the situation has stayed the same or worsened to some degree. 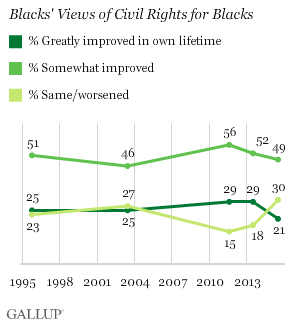 Though majorities of both races feel the situation has improved to some degree, both blacks and whites alike are less likely to feel this way than they have in any previous Gallup poll since 1995.

Hope for Future of Black Civil Rights Improvement Down Among Blacks, Whites

Both whites and blacks are now less likely than in 2008 to be hopeful about the state of civil rights for blacks in the future. Though majorities in the two racial groups believe the situation will have improved in 10 years, this view has fallen about 10 percentage points among both blacks (55%) and whites (67%) since 2008.

Sixty-seven percent of all Americans think black civil rights will improve in the next decade, down from 73% in 2008. A majority of blacks have consistently called for new civil rights laws, though the percentage has varied over time. The current 69% who hold this view is essentially the same as in August 1993, after the federal civil rights trial of the officers who had severely beaten Rodney King.

Whites have consistently been less than half as likely as blacks to feel additional civil rights laws are necessary -- currently, 31% say such laws should be passed -- again, back to about what white attitudes were in 1993. Though the issue of black civil rights is not a new one, the highly publicized events of the past year or so have revived the national conversation on this topic and significantly affected Americans' view of it. And while whites and blacks may see the situation differently, their faith in an improvement of blacks' civil rights has suffered, though it remains much more positive than negative overall.

In some states and municipalities, body cameras for police officers have been proposed or implemented in response to questionable law enforcement activity. But few, if any, discernable pieces of state or federal legislation have emerged in the wake of the Black Lives Matter movement. If a proposed law to improve the state of black civil rights gains any traction, it could stand a better chance now than in the past, as Americans are more amenable to efforts aimed at improvement than they have been, though this remains the minority view.

In the meantime, elected officials and law enforcement alike are working through a socio-political landscape that is full of racial tension, and Americans' shifting outlooks on the issue are indicative of this environment.

A majority of blacks in America today say that the government should play a major role in improving the social and economic position of blacks, while 19% of whites agree. A little over half of blacks say that new civil rights laws are needed in the country, while 15% of whites agree.