WASHINGTON, D.C. -- Gallup's U.S. Economic Confidence Index averaged -11 for the week ending Dec. 6, similar to the previous week's score of -12. The current score is on the higher end of the -11 to -15 range Gallup has found since September, after one-point improvements in each of the past two weeks. Americans' confidence in the economy was higher at the dawn of the year, as most weekly confidence index readings were positive between January and March. By spring, however, confidence had waned, and became decidedly more negative by summer.

Index scores have languished within a narrow range ever since, and have nearly flat-lined in recent months -- 10 of the previous 11 scores were -12 or -13; the exception was a -15 measured in late October. Though still negative overall, current confidence levels are much better than they were for most of 2008 to 2012.

Gallup's Economic Confidence Index is based on the combined responses to two questions: The first asks Americans to rate economic conditions in the U.S. today, and the second asks whether they think economic conditions in the country as a whole are getting better or getting worse. The index has a theoretical maximum of +100, if all Americans were to rate the economy as "excellent" or "good" and "getting better"; and a theoretical minimum of -100, if all were to rate the economy as "poor" and "getting worse."

For the week ending Dec. 6, 24% of Americans rated the current economy as "excellent" or "good," while 30% rated it as "poor." This resulted in a current conditions score of -6, identical to scores for the previous three weeks, and not far off from most readings over the year. Results for this Gallup poll are based on telephone interviews conducted Nov. 30-Dec. 6, 2015, on the Gallup U.S. Daily survey, with a random sample of 3,539 adults, aged 18 and older, living in all 50 U.S. states and the District of Columbia. For results based on the total sample of national adults, the margin of sampling error is ±2 percentage points at the 95% confidence level. All reported margins of sampling error include computed design effects for weighting. 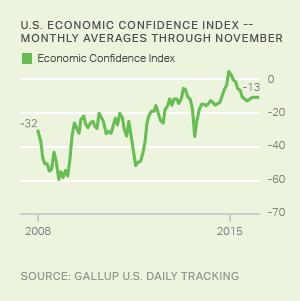 Gallup's U.S. Economic Confidence Index averaged -13 for the week ending Nov. 22. The index has varied little in recent months, with seven of the past nine weekly figures matching the current reading.