Despite the uninsured rate not changing much over the course of 2015, it has been lower in each quarter compared with the same quarter in 2014.

Results for the fourth quarter are based on nearly 43,000 interviews with U.S. adults aged 18 and older from Oct. 1-Dec. 30, 2015, conducted as part of the Gallup-Healthways Well-Being Index. Gallup and Healthways ask 500 U.S. adults each day whether they have health insurance, which, on an aggregated basis, allows for precise and ongoing measurement of the percentage of Americans with and without health insurance. Uninsured Rate Declines Most Among Hispanics

The uninsured rates have declined significantly within age groups since late 2013, with the exception of seniors, most of whom were already covered by Medicare before the recent changes in health insurance.

Large Uptick in Those Paying for Own Health Plan

To assess changes in insurance type, Gallup and Healthways focus on adults aged 18 to 64, because nearly all Americans aged 65 and older have Medicare. The percentage of 18- to 64-year-olds who are covered by an insurance plan fully paid for by themselves or a family member was 21.6% in the fourth quarter, up from 17.6% in the fourth quarter of 2013. The percentages of Americans with Medicaid and Medicare insurance also have increased over this period.

The sharp drop in the uninsured rate seen in the first year after the insurance exchanges opened has leveled off in the second year, with smaller declines seen in 2015 compared with 2014. This validates concerns that similarly large reductions may not be possible in the future because the remaining uninsured are harder to reach or less inclined to become insured more generally. Future reductions will likely require significant outreach and expanded programs targeting those who have not yet taken advantage of the health insurance marketplace.

Results are based on telephone interviews conducted Oct. 1-Dec. 31, 2015, as part of the Gallup-Healthways Well-Being Index survey, with a random sample of 42,998 adults, aged 18 and older, living in all 50 U.S. states and the District of Columbia. For results based on the total sample of national adults, the margin of sampling error is ±1 percentage point at the 95% confidence level. Each quarter dating to Quarter 1, 2014, has approximately 44,000 respondents. Each quarter from 2008 through 2013 has approximately 88,000 respondents.

Each sample of national adults includes a minimum quota of 60% cellphone respondents and 40% landline respondents, with additional minimum quotas by time zone within the region. Landline and cellular telephone numbers are selected using random-digit-dial methods. 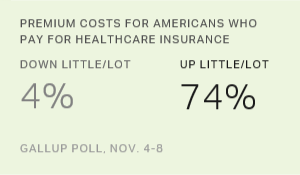 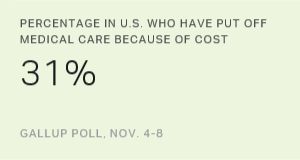 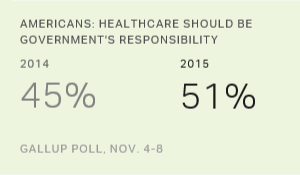