PRINCETON, N.J. -- U.S. investors are likely paying close attention to the sharp downturn in U.S. equities in January, with the Dow Jones industrial average tumbling nearly 8% in the past month. However, a recent Wells Fargo/Gallup Investor and Retirement Optimism survey suggests investors are likely abiding the slump fairly well. The vast majority of U.S. investors say they have high (25%) or moderate (56%) tolerance for a 5% to 10% decline in the stock market. Just 18% have little or no tolerance. Tolerance for market downturns is even greater among the subset of U.S. investors who currently own stocks either individually or in a stock mutual fund. Roughly three-quarters of investors own stocks, and more than eight in 10 of these say they have high (27%) or moderate (60%) tolerance for significant market downturns -- defined in the survey as not worrying at all or only worrying a little about market declines.

Notably, despite retirees' shorter time frame for recovering from market losses, they are no less likely than nonretirees to say they can tolerate sharp downturns. This ability to tolerate dips in the market holds true even for the subset of retired investors who currently have stock investments. Separately, the poll shows men are about twice as likely as women to have high tolerance for significant market slides: 33% vs. 17%, respectively.

These findings are from the latest Wells Fargo/Gallup Investor and Retirement Optimism Index survey, conducted Oct. 30 through Nov. 8, 2015, with 1,018 U.S. investors. Approximately 40% of U.S. adults meet the survey's criteria as investors, which is having $10,000 or more invested in stocks, bonds or mutual funds, either in an investment or in a retirement account.

Most Investors Focused on Long-Term Performance

The likely reason stock investors can stomach market turbulence is their long-term perspective. Nearly eight in 10 investors who currently have stock investments say they are primarily interested in the performance of them over 10 or more years; just 20% say their main focus is their performance over a six- to 12-month period. In the fourth quarter 2015 survey, most investors believed their investments matched their risk tolerance fairly well. Just 5% said their portfolio contained more risk than they are comfortable with, while 20% believed they could handle more risk. Although these attitudes predated what is happening in the market today, they came after an even steeper market plunge in late August, with the Dow dropping over 1,800 points in the span of a week before bouncing back some. Throughout September, more volatility for the Dow followed this plunge before the market steadily recovered by early November, around the time Gallup conducted the poll. At that time, investors pronounced that 2016 would bring more volatility, although only 16% thought it would be "highly" volatile.

Most investors have limited choices when the market nosedives: buy, sell or stay the course. Last fall, 25% of stock owners told Gallup they took advantage of the late August turmoil to purchase stocks to benefit from low prices, while 14% said they sold stocks to curtail their losses. However, the majority did neither, and while 50% said they paid closer attention to the market, the other half said they did not.

And that leads to a fourth choice investors have when the market gets ugly: don't look. But this choice is only warranted when investors have a financial plan that spells out long-term goals and the investment choices needed to get there, taking market volatility into account. According to the second quarter 2015 Wells Fargo investor survey, just 38% of U.S. investors have a written financial plan. This year could be the time more investors decide to make one. 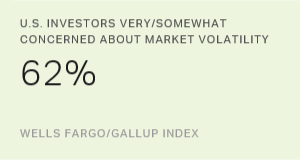 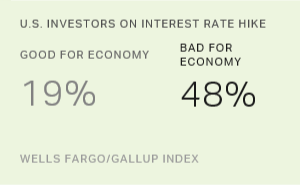