skip to main content
In U.S., Moderate Drinkers Have Edge in Emotional Health

These findings, based on daily interviews conducted from Jan. 2, 2014-Dec. 15, 2015, are from the 2015 Gallup-Healthways Well-Being Index. Similar to the way the U.S. Centers for Disease Control and Prevention (CDC) define it, Gallup and Healthways define moderate drinking as having one to two drinks per day. Using the moderate drinking threshold of one to two drinks a day, this analysis termed moderate drinking as one to 14 drinks a week. While the CDC defines heavy drinking differently for men and for women, for this study, Gallup and Healthways defined heavy drinking for both genders as consuming 15 or more drinks per week. These results control for age, gender, race, ethnicity, education, income, marital status and children in household.

Research into how alcohol consumption affects health has shown that moderate drinking is linked to lower rates of cardiovascular disease, diabetes and mortality, but could still increase one's risk of developing breast cancer. When it comes to the effect of alcohol consumption on mental and emotional health, a prominent medical study conducted in 1985 by clinical psychologist Cynthia Baum-Baicker showed that both heavy drinkers and nondrinkers have higher rates of clinical depression than moderate drinkers. The study also found that moderate alcohol consumption can increase overall happiness, euphoria, friendliness and pleasant feelings. A more recent study published in the Oxford Journal in 2006 found that for both men and women, moderate alcohol consumption led to improved cognition and fewer symptoms of depression.

The latest results from the Gallup-Healthways Well-Being Index are consistent with these findings and add to a body of research showing that for those who can safely drink alcohol, moderate consumption may yield mental and emotional health benefits. However, any study of the effect of drinking alcohol on health must take into account that drinking can be very harmful to those who abuse it and to those with certain medical conditions.

It is important to note that while this study controlled for the effect of a number of demographic variables, the relationship between alcohol use and depression is complex, and other variables may play a role in the relationship. It is also true that the directionality between the two is not established in these results. It is possible that people with poorer emotional health are more likely to choose abstaining from alcohol or heavy drinking than those with good emotional health. However, it could also be the case that moderate drinking is linked to emotional health benefits.

Results are based on telephone interviews conducted Jan. 2, 2014-Dec. 15, 2015, as part of the Gallup-Healthways Well-Being Index survey, with a random sample of 347,915 adults, aged 18 and older, living in all 50 U.S. states and the District of Columbia. For results based on the total sample of national adults, the margin of sampling error is ±0.21 percentage points at the 95% confidence level.

For results based on the total sample of nondrinkers, the margin of sampling error is ±0.28 percentage points at the 95% confidence level.

For results based on the total sample of moderate drinkers, the margin of sampling error is ±0.31 percentage points at the 95% confidence level.

For results based on the total sample of heavy drinkers, the margin of sampling error is ±1.06 percentage points at the 95% confidence level. 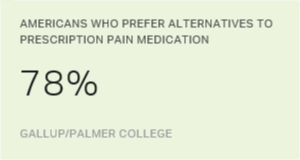