WASHINGTON, D.C. -- Gallup's U.S. Economic Confidence Index averaged -12 for the week ending Jan. 24. This is down from -7 the week before, but is in line with most other weekly averages Gallup has recorded since mid-2015. President Barack Obama's upbeat analysis of the nation's economic progress in his Jan. 12 State of the Union speech may have helped lift the weekly Economic Confidence Index five points to -7. That gain disappeared last week, with the index returning to -12. Nearly all the movement over the past three weeks has come among Democrats and Democratic-leaning independents, particularly in their outlook for the economy.

After reaching a historical high of +5 in January 2015, weekly economic confidence slowly fell, reaching a yearly low of -17 in late August 2015. After that low point, weekly Economic Confidence Index averages stayed within a narrow range of -10 to -15 for the rest of the year.

Gallup's Economic Confidence Index is the average of two components: how Americans rate current economic conditions and whether they think the economy is improving or getting worse. After increasing sharply, both components dropped in the most recent reading.

Since last March, the economic outlook score has been noticeably lower than the current conditions score, and it has shown more week-to-week change. The most recent reading is no exception, measuring -21 -- down sharply from -12 the week before but in line with the -19 Gallup found two weeks ago. The current -21 is the result of 37% of U.S. adults saying the economy is "getting better," while 58% say it is "getting worse." The U.S. Economic Confidence Index increased sharply in the days after the Jan. 12 State of the Union address, rising to the highest it has been since June 2015. In that speech, Obama touted the strength of the overall economy, and it appears many Democrats were swayed by that portrayal. This proved to be a short-lived increase, though, as the State of the Union fades from Americans' memory. Low oil prices have caused volatility in global stocks this year, and the low energy prices are starting to affect the economies of energy-producing states. Analysts also are unsure of the economic effect of the huge snowfall that blanketed much of the East Coast over the weekend.

Results for this Gallup poll are based on telephone interviews conducted Jan. 18-24, 2016, on the Gallup U.S. Daily survey, with a random sample of 3,544 adults, aged 18 and older, living in all 50 U.S. states and the District of Columbia. For results based on the total sample of national adults, the margin of sampling error is ±2 percentage points at the 95% confidence level. All reported margins of sampling error include computed design effects for weighting. 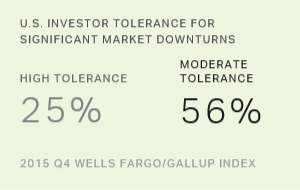 Most U.S. investors in a recent Wells Fargo/Gallup Investor and Retirement Optimism Index survey said they have high (25%) or moderate (56%) tolerance for sharp market downturns. Just 18% said they had little or no tolerance.

Gallup's U.S. Economic Confidence Index averaged -12 for the first full week of the new year. This is consistent with recent averages and within the range Gallup has measured since September.