WASHINGTON, D.C. -- As President Barack Obama rolls out a proposal to increase U.S. cybersecurity funding, Americans view cyberterrorism as a leading threat to U.S. vital interests in the next 10 years. U.S. adults rank cyberterrorism (73%) along with international terrorism (79%) and development of nuclear weapons by Iran (75%) as the highest of a dozen potential threats. In prior years, Americans have been most likely to identify international terrorism, which is down slightly from last year's 84%, and development of nuclear weapons by Iran as critical threats to the U.S. This is the first year Gallup has asked about cyberterrorism, defined in the poll as "the use of computers to cause disruption or fear in society."

In the Feb. 3-7 Gallup poll, 63% of U.S. adults consider the spread of infectious diseases throughout the world a critical threat. This comes as the first known case of Zika virus transmission in the U.S. was discovered in Texas, after many confirmed infections throughout the world. After this poll was conducted, Obama announced his intention to request additional emergency funding to combat Zika in the U.S.

The majority of Americans also see the military power of North Korea (58%) as a critical threat. On Sunday, the last day of the poll's field period, North Korea launched a rocket that illustrated the country's improvements in its missile technology.

Similarly, 58% of Americans name the conflict in Syria as a critical threat to the U.S., and a majority (52%) express concern over the potential of large numbers of refugees attempting to enter Europe and North America. Views of these threats as "critical" come as the conflict in Syria rages on, and the question of whether the U.S. would take in Syrian refugees has been hotly discussed in the 2016 presidential campaign.

The largest gap exists on the issue of global warming or climate change, which three in four Democrats and Democratic-leaning independents describe as a "critical threat," while only one in four Republicans and GOP leaners agree. Conversely, Republicans and Republican-leaning independents (70%) are nearly twice as likely as Democrats and Democratic leaners (37%) to view the issue of refugees entering Europe and North America in large numbers as a "critical threat."

On a couple of issues, however, the differences between the two groups are negligible. When asked about cyberterrorism, about three-quarters of both Democrats and Republicans view the issue as a "critical threat." Similarly, seven percentage points separate the views of the two party groups on the issue of infectious diseases. Given the spate of news on the fronts of international terrorism, cyberterrorism and nuclear weapons negotiations with Iran, it's perhaps unsurprising that these issues are at the forefront of Americans' concerns about potential threats to the U.S. over the next 10 years. And the president's high-profile efforts -- for example, his Wall Street Journal op-ed on cyberterrorism Tuesday -- align with the importance Americans place on such issues.

But an issue's prominence might be less of a factor in Americans' assessments than the seriousness of its consequences if it should happen. In the past year alone, Americans have seen the ramifications of the Paris terrorist attacks and of Chinese hackers' infiltration of U.S. federal government data.

Of course, Republicans and Democrats often don't agree about what constitutes a "critical" threat to the vital interests of the U.S. Still, for lawmakers, Americans' widespread agreement on issues such as cyberterrorism and infectious diseases may provide a welcome opening for bipartisan agreement and progress on issues whose importance has broad public consensus. 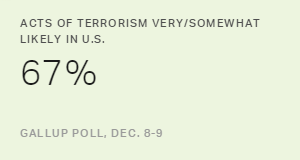