WASHINGTON, D.C. -- Americans' confidence in the U.S. economy, as measured by Gallup's U.S. Economic Confidence Index, averaged -13 for the week ending Feb. 14. This is the same score as the week before and remains similar to weekly scores since September, apart from a short-lived uptick to -7 in January after President Barack Obama touted U.S. economic progress in the State of the Union address. Last week was a roller coaster for the Dow Jones industrial average, which plummeted before regaining its footing on Friday. The turbulence in the stock market appeared to have little effect on Americans' overall views of the economy. Americans' assessment of the economy's condition -- which skews negative overall -- stayed put and remains significantly more negative than it was at this point last year.

For the week ending Feb. 14, 25% of U.S. adults rated the current economy "excellent" or "good," while 30% rated it "poor." This resulted in a current conditions score of -5, the same as the previous week. The economic outlook score for the week ending Feb. 14 was -20, also matching the week before and remaining consistent with recent scores. This is the result of 38% of U.S. adults saying the economy is "getting better" and 58% saying it is "getting worse." 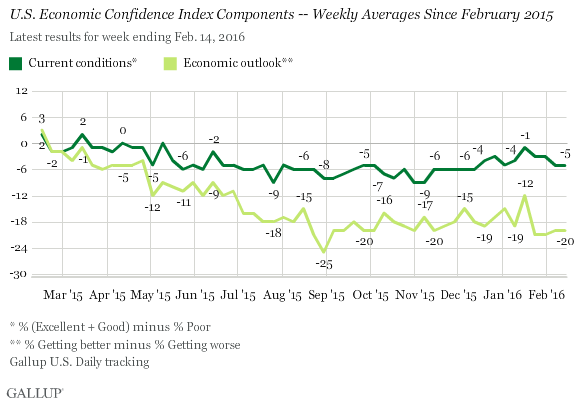 Americans' confidence in the economy has changed little over the past several months, suggesting that the public's views of current economic conditions and outlook for the economy have generally been resistant to both positive and negative real-world economic indicators.

While gas remains inexpensive and the U.S. unemployment rate dipped in January below 5.0% for the first time since 2008, the stock market remains turbulent and the latest Bureau of Labor Statistics jobs report found a lower number of jobs created in January than economists had predicted. These competing narratives of the economy's direction are consistent with the conflicting statements of Obama in his State of the Union address and of 2016 Republican presidential candidates, who argue the president's leadership has imperiled the nation's economic health.

Results for this Gallup poll are based on telephone interviews conducted Feb. 8-14, 2016, on the Gallup U.S. Daily survey, with a random sample of 3,544 adults, aged 18 and older, living in all 50 U.S. states and the District of Columbia. For results based on the total sample of national adults, the margin of sampling error is ±2 percentage points at the 95% confidence level. All reported margins of sampling error include computed design effects for weighting. 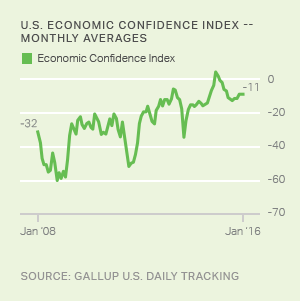 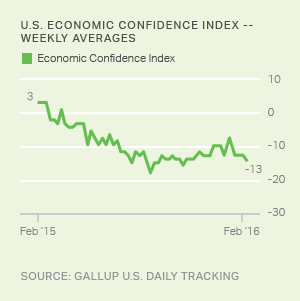