WASHINGTON, D.C. -- Americans were slightly more confident in the economy in March than they were in February; however, their confidence has not drastically changed in the past nine months. Gallup's U.S. Economic Confidence Index averaged -10 in March, up slightly from -13 in February and on the high end of the -10 to -14 range found since July. 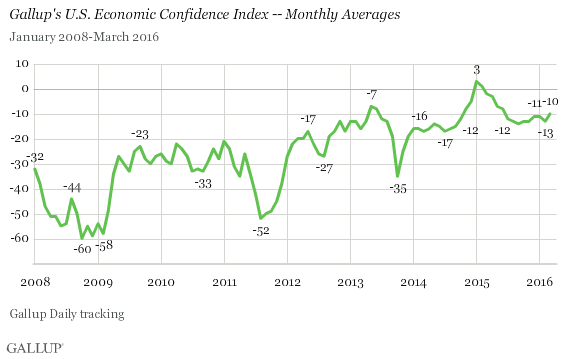 Overall, Americans' economic confidence is much higher than it was during the recession and immediate post-recession years, but it remains down from recent high points measured in early 2015.

Gallup's Economic Confidence Index for the week ending April 3, 2016, was also -10, recovering from a slightly lower -13 reading the week of the Brussels terrorist attacks.

Gallup's index is the average of two components: how Americans rate current economic conditions and whether they feel the economy is getting better or getting worse. Both of these components increased slightly in March from February.

In March, the current conditions score was -3, up from -5 the previous month. This was the result of 26% of Americans rating current economic conditions in the U.S. as "excellent" or "good," and 29% rating them as "poor." Americans continue to view current economic conditions more favorably than their outlook of the economy, as they have since March 2015. In the most recent polling, 39% of Americans said the economy was "getting better," while 56% said it was "getting worse." This resulted in an economic outlook score of -17, up from -20 in February. 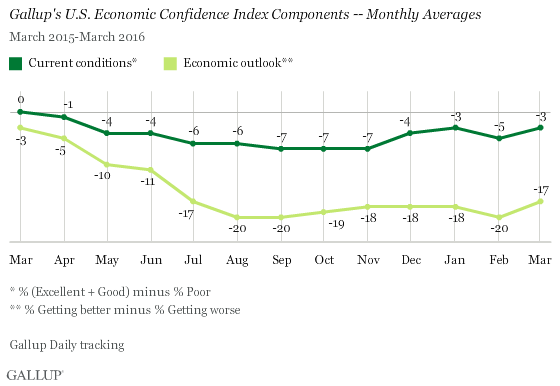 In March, the U.S. Economic Confidence Index among Democrats was +14, much higher than the -35 average among Republicans and the -13 average among independents. Economic confidence among Americans with different political identities is influenced by what party is in the White House. Democrats have been more confident in the economy than Republicans since 2009, when President Barack Obama took office.

Americans' slightly negative evaluation of the U.S. economy mirrors other mixed economic indicators. The Bureau of Labor Statistics reported that the economy gained a larger number of jobs than expected in March, but the unemployment rate also slightly increased. This reflects a small rise in the labor force participation rate, meaning that more Americans began actively looking for work after previously exiting the job market. However, wage growth in March was minimal, which is a disappointing sign. The federal government will release the U.S. gross domestic product figures in late April, which will provide indicators of whether the economy is growing.

Results for this Gallup poll are based on telephone interviews conducted March 1-31, 2016, on the Gallup U.S. Daily survey, with a random sample of 15,216 adults, aged 18 and older, living in all 50 U.S. states and the District of Columbia. For results based on the total sample of national adults, the margin of sampling error is ±1 percentage points at the 95% confidence level. All reported margins of sampling error include computed design effects for weighting. 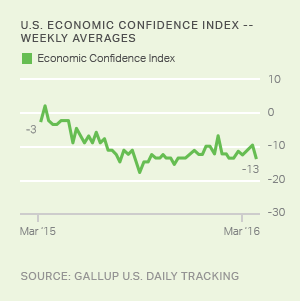 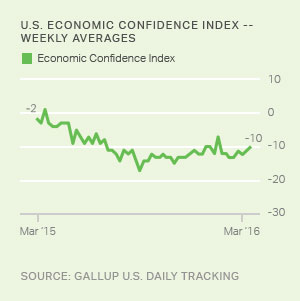