WASHINGTON, D.C. -- Americans' confidence in the U.S. economy retreated last week, with the U.S. Economic Confidence Index averaging -14 for the week ending April 10. This is down from -10 in the previous week, and is in the lower range of what Gallup has measured over the past year. The latest index score is the lowest by one point since the first week of November 2015, but not materially different from most scores since then, which have ranged primarily between -10 and -13.

Last week's -14 index score masks a period of falling and then rising confidence. After the index score registered -8 for April 2-4, confidence dropped to -18 for April 5-7 interviewing amid volatility in the U.S. stock market. By week's end, however, the index returned to -12 for Friday to Sunday, regaining much of the ground it lost before the midweek drop.

For the week ending April 10, the current conditions score of -6 is the lowest this component has recorded so far in 2016 -- down two points from the previous week. This score is based on 24% of Americans rating the current economy as "excellent" or "good," and 30% rating it as "poor." The economic outlook score took a more marked dip of six points from the prior week -- and is now at -22. This is the result of 37% of U.S. adults saying the economy is "getting better" and 59% saying it is "getting worse." It is the worst score for this component since late August, though some recent scores have not been far off. Americans' views of the national economy have been somewhat turbulent over the last several weeks, with confidence improving one week only to fall the following week. From a broad perspective, economic confidence so far this year has neither moved into a sustained period of positivity nor entered into a steady decline. Americans are confronted with presidential candidates using the economy as one of their talking points, mixed signals from national economic reports, volatility in the stock market and an apparent end of sub-$2 gas prices nationally -- all of which may be affecting their economic assessments.

Americans' cautiousness in their assessments of the economy may not be far off from those of economic leaders, however. Federal Reserve Board Chair Janet Yellen has been slow to raise interest rates, with some economists arguing Yellen has been overly cautious and has underestimated the economy's actual strength. Yellen's critics say the slow pace of raising rates will put the Fed at a disadvantage, with the possibility of increased inflation as the economy reaches its employment targets.

Results for this Gallup poll are based on telephone interviews conducted April 4-10, 2016, on the Gallup U.S. Daily survey, with a random sample of 3,542 adults, aged 18 and older, living in all 50 U.S. states and the District of Columbia. For results based on the total sample of national adults, the margin of sampling error is ±2 percentage points at the 95% confidence level. All reported margins of sampling error include computed design effects for weighting. 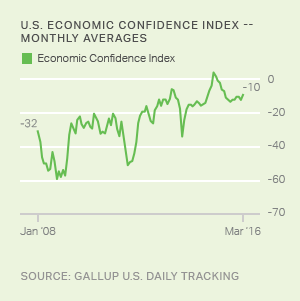 U.S. Economic Confidence Index Edges Up to -10 in March 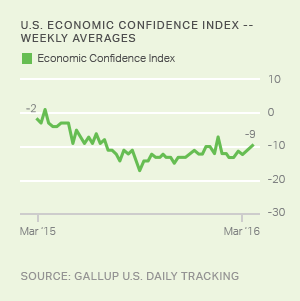