PRINCETON, N.J. -- Donald Trump, the presumptive Republican nominee who describes himself as "pro-life," still has significant work to do to convince the anti-abortion voting bloc that he is on their side. Sixty-three percent of Americans who describe themselves as "pro-life" are unable to say whether they agree or disagree with Trump on the abortion issue. The rest are about equally divided between agreeing (19%) and disagreeing (18%) with him.

Meanwhile, "pro-choice" Americans are much more likely to disagree than agree with Trump on abortion -- 46% vs. 7%, respectively -- while about half are unsure. Overall, a slight majority of Americans (56%) are uncertain about their level of agreement with Trump's abortion views; 13% agree with his views, and 31% disagree.

Hillary Clinton is unambiguously pro-abortion rights and has talked about her strong support for women's reproductive rights for decades. Nevertheless, the public is only a bit less vague about her stance on the issue compared with Trump's. Overall, 22% of Americans say they agree with her views and 32% disagree, while 46% are unsure.

These findings are from Gallup's 2016 Values and Beliefs poll, conducted May 4-8. The survey finds that 46% of Americans describe themselves as pro-life and 47% as pro-choice. That is a more even division than a year ago, when Americans leaned more toward the pro-choice side (50% vs. 44%) but is similar to attitudes in 2013 and 2014.

Abortion Not a Key Voting Issue for Most

Americans' general lack of familiarity with the leading Republican and Democratic presidential candidates' positions on abortion could reflect the relatively low profile the abortion issue has had in the campaign this cycle. Although discussion of the issue has flared at times, the economy, healthcare, immigration and national security tend to consume more air time.

Another reason, perhaps, that many Americans seem unclear as to where Clinton and Trump stand on abortion is that only 20% -- similar to the level in 2012 -- say the issue affects how they vote for major offices. One in five say they will only vote for a candidate who shares their views on abortion. Another 49% say it is one of many important factors they consider when voting, while 28% say it is not a major issue for them.

As in the past, slightly more in the pro-life than in the pro-choice camp -- 23% vs. 17%, respectively -- say that a candidate must share their views on abortion to win their support.

Abortion has not been a highly important voting issue for the public in the 2016 presidential election, at least not yet. And given the consistently low percentage of Americans who identify it as a key voting issue for them, that is not likely to change between now and November. Still, in a close election, even small constituency groups can have a pivotal effect on the outcome. Pro-choice Americans' clear leaning toward agreeing with Clinton's views could be advantageous for her. By contrast, Trump has failed to establish much of any image on abortion among self-described pro-lifers. How this develops between now and November could decide whether the 20% of pro-lifers who care deeply about the issue will come out and vote for him. 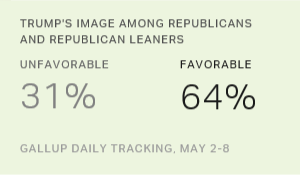