skip to main content
Economy
U.S. Economic Confidence Index Flat in May, at -14

WASHINGTON, D.C. -- Americans' confidence in the U.S. economy was flat in May. Gallup's U.S. Economic Confidence Index averaged -14 -- the same as in April, which was a seven-month low. The latest index score was quite a bit lower than the -7 registered one year earlier, in May 2015. This year's monthly scores have consistently been lower than the comparable months in 2015, and Americans' views of the national economy have consistently skewed negative since March 2015. Still, monthly index scores from the past couple of years have been well above most of the readings in Gallup's eight-year trend, particularly the dismally low ones recorded in the years after the Great Recession.

Examining the index on a weekly basis, however, reveals that confidence has recently improved somewhat. The past two weeks have both registered at -12, a minor improvement from the -14 to -16 weekly readings from mid-April to mid-May. Each party group's index score in May was about 20 points down from where their scores were in early 2015. The latest monthly scores were Democrats' and Republicans' lowest levels of confidence since their respective lows in 2014.

Democrats' May index score (+9) represented another successive monthly decrease in confidence. While Democrats are still the only party group to have net positive views of the economy, the latest score was their lowest since July 2014.

Republicans' score of -42 was technically their lowest since March 2014 but was not markedly different from the -35 to -41 range they remained in from January to April. Americans' confidence in the U.S. economy remains negative, although recent weekly readings of the index could mark a turning point. The consistent level of confidence reflects the balance of good and bad news from the Bureau of Labor Statistics' latest report -- job growth slowed in May, but the unemployment rate dipped to its lowest rate since 2007.

The Dow Jones industrial average is on the upswing, but so are gas prices. The latter, however, could merely be seasonal increases Americans are accustomed to seeing each spring and summer. Overall, Americans are nearly neutral in their assessments of how the national economy is currently doing. Their outlook for its future, however, remains negative.

Results for this Gallup poll are based on telephone interviews conducted May 1-31, 2016, on the Gallup U.S. Daily survey, with a random sample of 15,700 adults, aged 18 and older, living in all 50 U.S. states and the District of Columbia. For results based on the total sample of national adults, the margin of sampling error is ±1 percentage point at the 95% confidence level. All reported margins of sampling error include computed design effects for weighting. 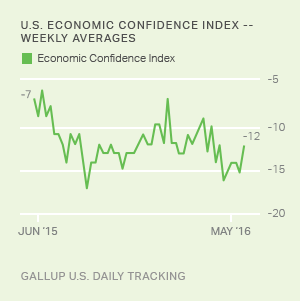 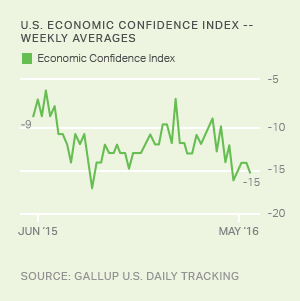