WASHINGTON, D.C. -- The suicide bombing in Baghdad last week -- by far the deadliest attack in Iraq in a decade -- will likely further test Iraqis' waning faith in the leadership of Prime Minister Haider al-Abadi and his government. In April this year, only 34% of Iraqis approved of Abadi's job performance. This is very different from the 72% approval ratings when Abadi first took office in 2014 after the unceremonious departure of his predecessor Nouri al-Maliki. The high approval ratings when Abadi first took office illustrate the lofty expectations Iraqis had for their prime minister. Abadi was expected to help bridge the ethnic and sectarian divides in Iraq and wrest control over parts of Iraq from the so-called Islamic State. The political honeymoon proved short-lived, however, with Abadi's approval rating sinking to 47% by late 2015 -- across most, if not all governorates of Iraq.

Abadi's latest low approval ratings were collected during weeks of political turmoil within the country's parliament that culminated with supporters of Shia cleric Muqtada al-Sadr storming parliament. The prime minister's low approval ratings may be symptomatic of Iraqis' low approval of their country's leadership in general -- which now sits at 35% -- and their falling confidence in their national government (42%).

The truck bombings took place in the Karrada neighborhood just as the government celebrated its victory against the Islamic State in Fallujah. Iraq's interior minister resigned, blaming the bombing on failing security measures around Baghdad and calling for reform. Public perception of widespread corruption in government is intensifying: rising from 67% in 2014 to 79% this year. Exactly 13 years ago this month, Gallup prepared to launch its first poll of Baghdad after the fall of Saddam Hussein. Iraqi interviewers conducting the poll on Gallup's behalf adamantly objected to asking Iraqis about religious sects, telling Gallup that Iraqis would be affronted by questions like this. The interviewers cited that about 40% of the registered marriages in Baghdad were mixed marriages between Sunnis and Shiites. For those interviewers, the notion of a sectarian conflict then was something dreamed up by enemies of Iraq.

The bombing in Baghdad last week gutted exactly the same neighborhood that Gallup Iraqi interviewers operated from back in the summer of 2003 and later in the winter of 2004. Today, the sectarian divisions are violently all too real, and unity is more like the dream.

Results are based on telephone interviews with 1,011 Iraqi adults, aged 15 and older, conducted in April 2016. For results based on the total sample of national adults, the margin of sampling error is ±3.9 percentage points at the 95% confidence level. All reported margins of sampling error include computed design effects for weighting. 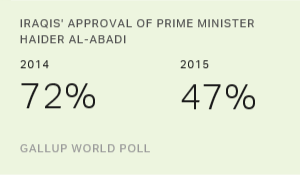 The high hopes that Iraqis had for Prime Minister Haider al-Abadi when he first took office in 2014 have faded over the past year. Abadi's approval ratings dropped from 72% in late 2014 to 47% in late 2015.

Nearly three-quarters of Iraqis approve of the new prime minister, Haider al-Abadi, up from 50% approval for former Prime Minister Nouri al-Maliki in May 2014. Approval has risen sharply in the Kurdish and Sunni regions.