WASHINGTON, D.C. -- Heading into Memorial Day, the five branches of the U.S. military earn high marks from the public they defend and protect. Strong majorities of Americans who are familiar with the branches give them similar, high favorable ratings.

Whether expressing their opinions about the Army, Navy, Air Force, Marines or Coast Guard, more than three in four of those Americans who know something about the branches have overall favorable views, and more than half have a strongly favorable opinion. Those views are consistent with Americans' high ratings of the military in general. In Gallup's annual Confidence in Institutions poll, the military has topped the list every year since 1998, with at least 72% expressing "a great deal" or "quite a lot" of confidence in the military in the past eight years.

Differences emerge, however, by political party, race and age. Republicans, non-Hispanic whites and those aged 55 and older who are aware of each branch are much more likely to have strongly favorable views of each of the five branches than are Democrats, nonwhites or those younger than 35.

The biggest gaps in favorable opinion are between Republicans and Democrats (including those who lean to either party). The largest is a 35-percentage-point difference in views toward the Navy, with 74% of Republicans versus 39% of Democrats having strongly favorable views.

Americans familiar with the individual branches of the military are about as likely to think favorably of one branch as another, but in a separate question, Americans in general distinguish among the branches when considering their importance to national defense. The largest percentage (27%) say the Air Force is the most important branch, while about one in five name the Army (21%), Navy and Marines (20% each). Just 4% consider the Coast Guard the most important branch to national defense.

An earlier version of the question showed the largest share of Americans naming the Air Force as most important in May 2001, four months before the 9/11 terrorist attacks, and in April 2002, after the onset of the Afghanistan War. But once the Iraq War began in 2003, with the large-scale invasion by Army ground troops, the largest percentage of Americans picked the Army in 2004, 2011 and 2014.

This Memorial Day, Americans will once again have the opportunity to honor those who fought and died in service of their country. It comes at a time when the percentage of Americans who are military veterans continues to shrink, even as the nation moves through the 15th year of the Afghanistan War -- the longest war in U.S. history.

But neither the dwindling percentage of Americans having served in the military nor shrinking support for the Afghanistan War has caused the public to lose confidence in the military. Nor have they caused Americans to turn against any of the five branches that provide for the nation's defense.

The lack of major differences in favorable opinions from one branch to another does not necessarily mean that the public makes no distinctions among them. Americans have no problem drawing those distinctions when considering which branch is most important or which is most prestigious. But, at least for now, they find little reason in most cases to differentiate in their favorable -- or unfavorable -- opinions of the Army, Navy, Air Force, Marines or Coast Guard. 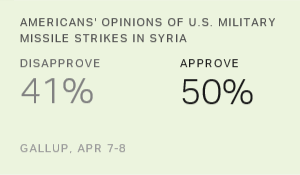 The 50% of Americans who approve of the military strikes against Syria last week is historically low compared with other previous U.S. military actions. 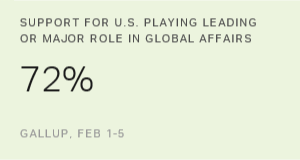