WASHINGTON, D.C. -- Americans hold all branches of the U.S. military in high regard, but that does not necessarily translate into a desire to see their loved ones enlist. Fewer than half would be likely to recommend joining the Coast Guard (48%), Marines (43%) or Army (41%) to their children or grandchildren, while a majority would be likely to recommend the Navy (53%) or Air Force (64%).

These responses come from a Gallup poll of 482 Americans aged 25 and older who were asked how likely they would be to recommend each branch if a child or grandchild was considering entering the military. About three-quarters (76%) of Americans would recommend at least one of the branches.

The clear differences in preferences, from the high of 64% who would recommend the Air Force to the low of 41% for the Army, could reflect people's perceptions of the risk of death to those serving in each branch. In fact, the rank-order is generally consistent with the casualty rates for the four main branches (excluding the Coast Guard) in the Iraq and Afghanistan wars. Through April 24, 2017, there had been almost 5,000 deaths in the Army from the two conflicts, just under 1,500 in the Marines, almost 250 in the Navy and slightly fewer than 200 in the Air Force, according to a report from the Congressional Research Service.

Differences by gender and knowledge of the branch are generally largest for recommendations on the Navy and Air Force and smallest for the Army. Differences by party are similarly large among all branches except the Coast Guard. For example, 66% of men and 68% of Republicans, including leaners, would recommend the Navy, but only 42% of women and 43% of Democrats and leaners would do so. Seventy-seven percent of Republicans plus leaners and 73% of men would recommend the Air Force, compared with 55% of women and of Democrats plus leaners.

After watching its ranks shrink for several years, the U.S. military now faces the challenge of increasing troop levels, based on legislation passed in the last year of Barack Obama's administration and calls from President Donald Trump for an even larger force.

The growth in troop strength affects all four of the major combat branches (Army, Navy, Air Force, Marines), but none faces a bigger recruiting test than the Army. Already the largest branch, which requires it to recruit more men and women than the other branches to stay at current levels, the Army now must reach a goal of 476,000 active-duty soldiers, an increase from the previous goal of 460,000.

In meeting this challenge, the Army faces a considerable hurdle. Research shows that family support can play a major role in a potential candidate's decision to enlist, and Americans are far less likely to recommend the Army than the Navy or Air Force to a child or grandchild who is considering enlisting.

The percentage who say they would recommend the Army is about the same as for the Marines. However, the Marines are adding only 800 men and women to their ranks and have the advantage of being considered the most prestigious of the military branches.

All of these factors make it easy to understand why the Army is launching a $300 million campaign involving bonuses and advertising over the next eight months to meet its recruiting goals.

Results for this Gallup poll are based on telephone interviews conducted April 24-May 2, 2017, with a random sample of 482 adults, aged 25 and older, living in all 50 U.S. states and the District of Columbia. For results based on the total sample, the margin of sampling error is ±6 percentage points at the 95% confidence level. For the gender, political party and knowledge-of-each-branch subgroups, results based on the smallest sample (199 Democrats and leaners) have a margin of sampling error of ±9 percentage points at the 95% confidence level. All reported margins of sampling error include computed design effects for weighting. 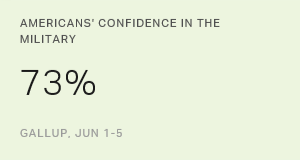