These data, collected in Gallup's annual Consumption Habits polls from 2001 to 2017, may reflect the power of a deeper nicotine addiction or a resignation about their inability to quit among those who smoke the most. Though a solid majority of the heaviest smokers say they want to quit, nearly a third are OK with continuing to smoke.

Over the past several decades, local, state and federal taxes have made smoking an increasingly expensive habit in the U.S. Laws prohibiting smoking in various public places have made it more inconvenient as well. Most smokers feel discriminated against at least occasionally because of their habit. But perhaps underscoring the addictive quality of nicotine, significant percentages of smokers who use varying levels of tobacco say they do not desire to quit.

The vast majority of Americans believe smoking is "very harmful" to those who smoke cigarettes. However, smokers themselves, regardless of how frequently they smoke, are less likely to hold this view. Heavier smokers are even less likely than lighter smokers to say smoking is very harmful to one's health.

Among those who smoke more than a pack a day, about half (51%) say the habit is very harmful, compared with 56% who smoke one pack a day and 65% who consume less than a pack daily.

When it comes to how their habit affects others, heavier smokers are also less likely to acknowledge the negative effects of secondhand smoke.

Most smokers want to quit. They feel at least occasionally discriminated against for their habit, and a majority of Americans continue to support banning smoking in public places altogether.

But larger efforts to combat smoking could be hindered by heavy smokers' subdued enthusiasm for quitting. In addition to being more likely to say they would not like to quit, heavy smokers are less likely to perceive that their habit damages their own health and the health of others.

Results for this Gallup poll are based on combined telephone interviews from Gallup's annual Consumption Habits survey, conducted each July from 2001 to 2017. The combined sample is based on interviews with 3,368 randomly selected U.S. adults, aged 18 and older, living in all 50 U.S. states and the District of Columbia, who smoke cigarettes.

For results based on the total sample of 315 adults who smoke more than a pack of cigarettes a day, the margin of sampling error is ±7 percentage points at the 95% confidence level.

For results based on the total sample of 992 adults who smoke a pack of cigarettes a day, the margin of sampling error is ±4 percentage points at the 95% confidence level.

For results based on the total sample of 1,992 adults who smoke less than a pack of cigarettes a day, the margin of sampling error is ±3 percentage points at the 95% confidence level. 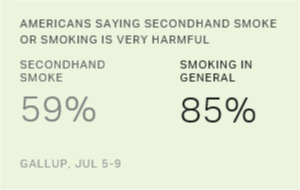 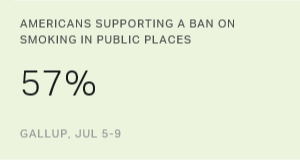 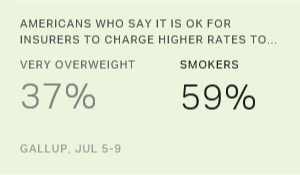