skip to main content
Politics
Satisfaction With Quality of Environment in U.S. at New Low

WASHINGTON, D.C. -- Americans are slightly more likely to be dissatisfied (52%) than satisfied (45%) with the quality of the environment in the U.S. This is, by one percentage point, the lowest level of satisfaction with environmental quality in Gallup's 18-year trend, and the first time the percentage of dissatisfied Americans has exceeded 50%. These data are from Gallup's annual Mood of the Nation poll, conducted Jan. 2-7, 2018. This is the first measure of Americans' views on this question during Donald Trump's presidency.

Changes to environmental regulations have been among the Trump administration's most sweeping policy reversals, fulfilling Trump's campaign pledges to roll back Obama-era regulations deemed burdensome to economic growth. The policy reversals include withdrawal from the Paris Climate agreement, eliminating certain emissions standards and repealing bans and standards on oil and gas drilling.

For most of Gallup's trend going back to 2001, a slight majority of Americans have said they are satisfied with the nation's environmental quality. Satisfaction has now reverted to roughly its previous low of 46% in 2007, when concerns about global warming spiked. This could have been partly related to the previous year's release of former Vice President Al Gore's documentary, "An Inconvenient Truth," which sought to bring light to the issue of climate change, as well as President George W. Bush's waning popularity.

Democrats' Satisfaction With Quality of Environment Plummets by 15 Points

Democrats have generally been the least satisfied party group when it comes to environmental quality, as their party has long assumed the mantle of protecting against climate change and the environmental impact of energy production. But Democrats' satisfaction is now at its lowest level since 2001 after falling sharply in the past year, from 45% to 30%, with the transition from Barack Obama's to Trump's administration. It is down a total of 23 points from before the 2016 election.

In sharp contrast, at least six in 10 Republicans have been satisfied with the quality of the environment over the past 18 years.

Just under half of independents, 45%, are satisfied with the current state of U.S. environmental quality. Independents' views have generally been closer to those of Democrats on this measure, but with this year's large drop in Democratic satisfaction, the difference between independents and Democrats is the largest to date. Many of the Trump administration's changes to environmental regulations have not yet taken effect or have not been enacted long enough to have a noticeable impact on the environment. It's likely, then, that the dip in Americans' satisfaction with the environment is a reaction among Democrats to the about-face on many key governmental policies rather than any real changes being experienced. Americans' ratings of Trump's handling of the environment are among his lowest marks on a list of issues -- and significantly lower than the ratings Obama and Bush received on the environment.

However, 2017 was one of the hottest years on record, and Americans may be answering with those recent high temperatures in the back of their minds -- not to mention a particularly devastating hurricane season that upended many Americans' homes and lives.

Trump has conceded little, if anything, to the environmental concerns raised by scientists and environmental activists. He tends to play to his Republican base, which expresses less concern than other party groups about global warming. So his presence in the White House will likely leave Democrats dissatisfied with environmental policy as long as he is president.

But it's possible that if 2018 is a tamer year in terms of temperatures and natural disasters, Americans at large may come to a more positive view of the environment's quality. 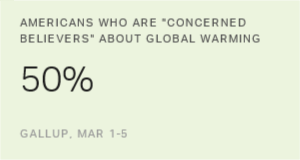