These data come from a Northeastern University/Gallup survey of Americans' attitudes toward artificial intelligence (AI) and its effect on their lives and work. The mail survey of 3,297 U.S. adults was conducted Sept. 15-Oct. 10, 2017. The data show Americans are largely positive about the impact AI will have, but still expect it to cost jobs, with 73% of Americans predicting that AI will lead to a loss of more jobs than it creates.

The survey asked Americans to choose which they thought was the greater threat to U.S. jobs over the next decade, immigration and offshoring or new technology, automation, robots, or artificial intelligence. The question defined offshoring as jobs or companies moving overseas.

U.S. Workers Twice as Likely to Worry About Losing Job to AI Than to Immigration

U.S. workers as well see a greater threat from new technology than from immigration and offshoring. Almost one in four American workers say they are very or somewhat worried about losing their own jobs to new technology, nearly twice as many as the 12% who say the same about immigration and offshoring. Levels of worry about these specific threats to American workers' jobs are higher than the 8% of U.S. adults who worry about being laid off in the next 12 months, in general.

Americans largely perceive new technology as a greater threat to jobs in the U.S. over the next decade than immigration and offshoring. This view is supported by a recent Oxford study of the potential impact of the adoption of AI on the U.S. job market, which suggests as many as 47% of jobs are potentially at risk of elimination from this new technology. In contrast, estimates of the cost in American jobs from immigration and offshoring vary widely, with some reports suggesting these may create more jobs than they eliminate.

The risk posed by new technology to American jobs has been given little public attention by President Donald Trump's administration. U.S. Treasury Secretary Steven Mnuchin recently said that there was no need to worry about AI displacing American workers for a half century or more. Trump has been much more focused on the impact of immigration, based on the contention that immigrants take jobs away from Americans.

Whether the Trump administration is focused on the impact of AI on jobs, many others see it as particularly pressing. Nearly three-quarters of Americans (73%) say the adoption of AI will eliminate more jobs than it creates.

-For results based on the total sample of 3,297 U.S. adults, the margin of sampling error is ±2 percentage points at the 95% confidence level.

-For results based on the sample of 2,871 employed U.S. adults, the margin of sampling error is ±3 percentage points at the 95% confidence level. 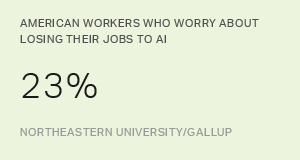 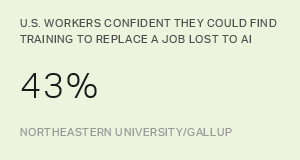