WASHINGTON, D.C. -- Americans who say they hold liberal views on social issues differ markedly from social conservatives on the morality of most moral issues, with the largest gap in opinions on abortion. The two groups also diverge greatly on gay/lesbian relations, having a baby outside of marriage, sex between teenagers and euthanasia. Liberals are much more likely than conservatives to view each as morally acceptable. The latest results are based on Gallup's May 1-10 Values and Beliefs poll. In 1999, Gallup first asked Americans to describe their views on social issues using a five-point "very liberal" to "very conservative" scale. Since 2001, the question has been asked at least annually.

The percentages of Americans who identify as socially liberal and socially conservative are currently equal at 33%. Although this is only the second time since 1999 that the percentages have been identical, the two groups have been trending closer over the past six years. Yet, before 2013, social conservatives had a clear numerical advantage over social liberals.

The diminished conservative advantage in social ideology is consistent with a trend for Americans to move toward more liberal (that is, less conservative) positions on a host of social issues, including gay marriage, marijuana legalization, animal cloning and pornography.

Over the past decade, Americans have become more likely to identify as liberal on social issues, and as a result, they have achieved parity with social conservatives. This polarization is seen in the views of both groups across a wide range of issues, particularly abortion and gay/lesbian relations. As the midterm election campaigns heat up, candidates will have to weigh the pros and cons of focusing on the most divisive issues. 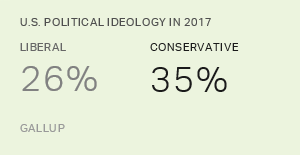 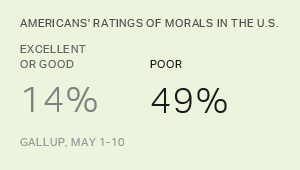