WASHINGTON, D.C. -- The use of e-cigarettes, or vaping, is much more prevalent among Americans under 30 than among those who are older, and is as common among these young people as the use of conventional cigarettes. Because young people have become much less likely to smoke in recent years, it's possible that vaping is functioning as a substitute, which, if true, may have positive health implications.

The current results are based on a July 1-11 Gallup survey, the first in which Americans were asked about vaping habits in comparison to other types of smoking.

Gallup's long-term trend on smoking asks respondents whether they have smoked cigarettes in the past seven days. This trend documents a sharp decline in young people's use of conventional cigarettes over the past two decades. In the early 2000s, about a third of 18- to 29-year-olds reported smoking cigarettes in the previous week, the most of any age group. But today, that percentage has dropped in half, and smoking among 18- to 29-year-olds is now lower than among those 30 to 64 -- a remarkable shift in age characteristics of smokers.

Thus, the 20% of young people who vape is now on par with this age group's use of conventional cigarettes. It's possible that one cause of the drop in cigarette smoking among young people is the development of vaping as a new nicotine delivery method.

Importantly, young people are less likely than those 30 and older to believe vaping is risky: 22% of those under age 30 say vaping is "very harmful" to one's health, well below the 40% or more seen in every other age group. (All age groups are much less likely to say that vaping is very harmful than to say this about conventional smoking.) At the same time, young people's views about the health effects of traditional smoking are no different than older age groups' views.

These data on the perceived harm of the two ways of using nicotine supports the idea that young people may feel comfortable shifting from traditional smoking to vaping because they believe it's less harmful.

Smokers Much More Likely to Vape

The data show a strong relationship between smoking conventional cigarettes and vaping among all adults -- not surprising, given that both behaviors function as ways to deliver nicotine into one's system. Specifically, 29% of the relatively small number of all U.S. adults who say they smoked a traditional cigarette within the past seven days (n=133 in Gallup's July 1-11 survey) say they vape. That contrasts with 8% of former smokers and 5% of those who have never smoked.

Smokers are also less likely than others to say that vaping is harmful to one's health.

It is difficult with cross-sectional survey data to determine the precise reasons why people -- particularly young people -- decide to vape. It's also difficult to determine the time sequences involved among those who both smoke and vape. Vaping could be a gateway to traditional cigarettes or vice versa -- that is, vaping could be the entry point for young people into smoking, or people could try vaping after starting to smoke cigarettes. But given that Americans are much less likely to view vaping as harmful compared with smoking generally, it may be that vaping is being adopted as a substitute for smoking for health reasons -- as other public health research suggests.

Americans who are former smokers in this survey are little different from those who have never smoked in their reports of vaping. So there is no evidence that large numbers of Americans who have quit smoking cigarettes altogether now vape in its place. But most former smokers likely quit long before vaping became well-known as a smoking alternative. If smokers are using vaping as a way to help quit their use of conventional cigarettes, it's possible that in the future, the incidence of vaping among former smokers will increase.

These current data show a significant overlap in the two smoking behaviors -- people who smoke conventional cigarettes are by far the most likely to be vaping. And vaping has become particularly prevalent among young people, even as their rate of smoking cigarettes has plummeted. Thus, it seems possible that the advent of electronic cigarettes could, on balance, be having an overall positive effect on the health of the American population.

Public health researchers clearly would prefer that Americans, particularly young people, don't use nicotine at all because its addictive nature leads to negative effects associated with the ways in which it is ingested into the system. But as smoking expert Dr. Kenneth Warner of the University of Michigan School of Public Health said in a recent Gallup podcast, "I personally believe based on my research that e-cigarettes are more beneficial than harmful to the public's health because research suggests that vaping is helping at least a subset of smokers to quit smoking." 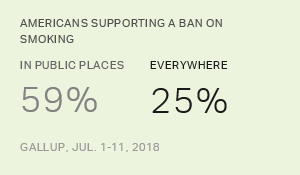