WASHINGTON, D.C. -- Despite a profusion of online services that offer busy Americans an alternative to spending time in the grocery store, 84% of U.S. adults report they never order groceries online and 89% never order meal preparation kits. Americans are much more inclined to simplify mealtime by ordering takeout or by going out to eat. However, nearly all Americans still shop for groceries the old-fashioned way -- by going to a store.

According to Gallup's July 1-11 Consumption Habits poll, about one-third of Americans (32%) shop for groceries in person more than once a week, about half (49%) shop once a week and 18% go less often than that. Just 1% say they never go.

In contrast to the 81% who grocery shop in person at least weekly, only 4% of U.S. adults order groceries online this often, while another 11% say they do it less frequently. Similarly, just 1% order meal preparation kits weekly and 9% order them less often.

Aside from purchasing their own food, presumably to make at home, 45% of adults report eating out at a restaurant at least weekly and 31% order takeout food.

These findings represent the first time Gallup has measured Americans' reliance on meal prep kits, takeout food and dining out in this format. However, a year ago Gallup asked the same question about grocery shopping at stores and online and showed similar results to today.

Virtually all Americans report visiting grocery stores to some degree, but higher-income people go more frequently: 90% of those in households earning $75,000 or more per year shop for groceries in stores at least weekly, versus 84% of those earning between $30,000 and $74,999 and 63% of those earning less than $30,000. There is little difference in store visits by gender, age or even whether an adult has children in the household.

Restaurant dining is also strongly related to income, with the percentage eating out weekly or more dropping from 63% of those earning $75,000 and above to 41% of those in the middle-income bracket and 21% of those in the lowest income bracket. Again, age and gender are not big factors in this, but employment status is: 52% of those working full- or part-time versus 36% of those not employed say they eat out at least once a week.

Parents at the Vanguard of Ordering Groceries Online

The greatest demographic distinctions for the other food purchase methods measured are evident when focusing on the percentages of Americans who use each at least monthly. Most notably:

Americans overall remain traditionalists when it comes to purchasing food, relying mostly on grocery shopping rather than services that bring food to them. Services like PeaPod, Instacart, Shipt and Amazon Fresh that cut out the trip to the grocery store appeal mainly to those short on time -- parents with children younger than age 18 and employed adults. Higher-income Americans are also bigger adopters of grocery delivery, either because higher income means they can afford more groceries or because they have greater access to mobile technology like smart phones and tablets that make ordering online easier. More generally, Americans may just not like to think that far in advance when it comes to what to eat.

Because routine use of meal preparation kits is low across all demographic groups, it is difficult to speculate on what the best target markets are. The recent trend of firms like Blue Apron and Plated to selling their meal kits in retail stores may prove more successful -- offering Americans the ultimate convenience.

Bigger picture, Americans have shown tremendous willingness to make purchases online -- including when holiday shopping. Thus, it's not likely that technology is what holds most people back from adopting new digital approaches to ordering food. Food can be one of the biggest line items in people's household budget, and going to the store -- including comparison shopping among stores -- may afford more control over getting the lowest prices. Others may simply enjoy browsing a grocery store for inspiration, prefer to pick out their own perishables or not want to plan ahead for meals.

If dinner is not in the fridge, then a trip to the store or a restaurant solves the problem. And if that's too much trouble, there's always takeout. 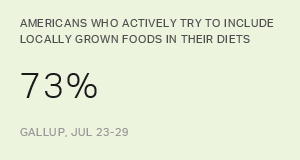