WASHINGTON, D.C. -- Forty-five percent of Americans have a great deal or fair amount of trust in the mass media to report the news "fully, accurately and fairly," representing a continued recovery from the all-time low of 32% in 2016. Media trust is now the highest it has been since 2009 but remains below what it was in the late 1990s and early 2000s. Two decades later, the next time Gallup asked the question, trust in the media had fallen to 53%. It held at about that level through 2003, before falling to 44% in 2004 amid controversy over inaccurate reporting by Dan Rather of CBS News about George W. Bush's military service. CBS later issued an apology for the report. Although media trust rebounded slightly to 50% a year later, it has yet to return to the majority level.

Democrats' Trust in Media Highest in Past 20 Years

All party groups' trust in the media hit record lows in 2016 and has increased in the past two years. Democrats' trust surged last year and is now at 76%, the highest in Gallup's trend by party, based on available data since 1997. Independents' trust in the media is now at 42%, the highest for that group since 2005. Republicans continue to lag well behind the other party groups -- just 21% trust the media -- but that is up from 14% in 2016 and last year. Republicans have typically placed less trust in the media than independents and especially Democrats, but the gap between Republicans and Democrats has grown. The current 55-percentage-point gap is among the largest to date, along with last year's 58-point gap. President Donald Trump's attacks on the "mainstream media" are likely a factor in the increasingly polarized views of the media. Republicans agree with his assertions that the media unfairly covers his administration, while Democrats may see the media as the institution primarily checking the president's power.

Younger Adults Are Less Trusting in the Media

Trust in the mass media differs significantly by age, and in a way that runs counter to the groups' typical party leanings: Older Americans are more likely to trust the media than younger Americans are. In the current survey, 53% of those aged 65 and older trust in the media, compared with just 33% of those under age 30. Younger adults have come of an age in an era marked by partisan media and fake news, while older Americans' trust may have been established long ago in an era of widely read daily newspapers and trusted television news anchors.

The gap in trust by age is a relatively recent development. From 1997-2005, before today's young adults reached adulthood, Americans aged 18-29 were just as trusting as older adults. But since 2007, young adults have been less trusting, although the average 10-point gap over that period between those aged 18 to 29 and those 65 and older is smaller than the 20-point gap seen in this year's data.

Americans' trust in the media has recovered somewhat since bottoming out two years ago, particularly among Democrats, but overall trust remains below where it was around the turn of the century. Trust in the media may be affected by the larger trends affecting confidence in many major U.S. institutions, which began to decline in 2005. Attitudes toward the media have also become politicized in recent years, in much the same way attitudes toward labor unions have. Lastly, generational factors appear to be at play, with today's young adults less trusting of the media than their older peers. 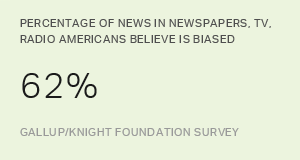