WASHINGTON, D.C. -- Although it's still not terribly high, Nigerians are almost three times as confident in the honesty of their elections ahead of their next presidential one on Feb. 16 than they were in 2014 before their last election. Roughly a third of Nigerians (34%) now say they have confidence in the honesty of the country's elections, compared with 13% in 2014 -- which was the lowest in any of the 32 African countries Gallup surveyed that year. Confidence in the honesty of the country's elections jumped 29 percentage points following the last presidential election in 2015. In that election, Nigeria's former military leader Muhammadu Buhari -- the incumbent in this election -- won a resounding victory over the previous incumbent Goodluck Jonathan.

The election was an important step in Nigeria's democracy, as it saw Jonathan's People's Democratic Party, which had controlled the country since military rule ceased in 1999, lose and peacefully transition authority to Buhari. Except for a brief bout of optimism in 2011 and 2012, following a legislative election generally seen as free and fair, no more than 22% of the Nigerian public had expressed trust in the honesty of elections before Buhari took office.

Nigerians this time around are also more confident in their national government. Nearly half of Nigerians (45%) currently have faith in their leadership, up from 29% in 2014. This increase is not surprising; under Jonathan, the militant group Boko Haram seized large amounts of territory in Northern Nigeria.

Buhari ran on a platform of rolling back the militant group's gains and is largely seen as having done so, though Boko Haram has staged something of a resurgence as the 2019 election approaches. This large increase in Northern Nigeria may also be related to Buhari's ties to the north of the country. Since the end of military rule, there has been a general pattern of alternating presidents from the north and south of the country. This pattern had been broken under Jonathan, a southerner, who served nearly two terms as president.

Government Corruption Not Seen as Having Improved

Increases in confidence in the honesty of elections and the national government, in general, would tend to indicate Buhari's success. However, in one area that was key to Buhari's 2015 campaign, combating corruption, there has been little perceived change. Buhari has pursued a high-profile campaign which has targeted government corruption, with authorities having arrested former high-ranking members of the Nigerian government and investigated Jonathan and his wife. Despite these efforts, there has been effectively no change in Nigerians' perceptions of widespread government corruption from 2014, when 86% said there was pervasive corruption in government, to 2018, when 84% said the same.

Nigerians' confidence in important institutions remains low, with a third trusting in the honesty of elections and less than half expressing confidence in their national government. Despite these relatively low levels of confidence, they represent substantial improvement over where Nigeria was prior to the 2015 presidential election. This progress would appear to indicate that Buhari was well-positioned in the field of 78 candidates for the Feb. 16 presidential election.

However, Buhari also faces several weaknesses as the election approaches, including increased attacks by Boko Haram, continued perception of widespread corruption and economic sluggishness following a recession in Nigeria in 2017. Continued economic pain is a particular weakness for Buhari; in December 2017, 59% of Nigerians identified the economy as the most important issue for the government to address, compared with 23% who said corruption and 9% who identified terrorism.

These weaknesses may open an opportunity for Buhari's closest competitor, Atiku Abubakar. Abubakar, the candidate of the People's Democratic Party, is a businessman who has been promoting his economic acumen to persuade Nigerians that he could bring them prosperity as the country's next president. 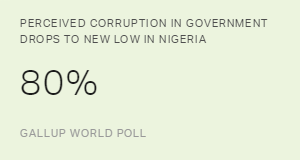 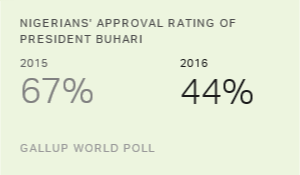