WASHINGTON, D.C. -- Even as their economy roared, more Americans were stressed, angry and worried last year than they have been at most points during the past decade. Asked about their feelings the previous day, the majority of Americans (55%) in 2018 said they had experienced stress during a lot of the day, nearly half (45%) said they felt worried a lot and more than one in five (22%) said they felt anger a lot. Each of these figures matches or tops previous highs in the U.S. Additionally, Gallup's latest annual update on the world's emotional state shows Americans were more likely to be stressed and worried than much of the world. In fact, the 55% of Americans who experienced stress was one of the highest rates out of the 143 countries studied and it beat the global average (35%) by a full 20 percentage points. The U.S. even ties statistically with Greece, which has led the world on this measure every year since 2012.

When it comes to worry, the six-point gap between the U.S. (45%) and the global average (39%) was not nearly as substantial as it was with stress. The U.S. was also far from the top of the list of countries with the largest worried populations. In 29 countries, a majority of people said they worried a lot the previous day, including at least six in 10 in places such as Mozambique (63%), Chad (61%) and Benin (60%).

And, even though more Americans were angry last year than most years in the past, the 22% who were angry was the same as the global average. Americans, as a whole, were half as likely to be angry as the populations of the Palestinian Territories (43%), Iran (43%), Iraq (44%), and Armenia (45%).

Which Americans Are Most Stressed, Worried or Angry?

Younger Americans between the ages of 15 and 49 are among the most stressed, worried and angry in the U.S. Roughly two in three of those younger than 50 said they experienced stress a lot, about half said they felt worried a lot and at least one in four or more felt anger a lot.

And, although Gallup does not ask about political affiliation in its World Poll, there was also a strong relationship between stress, worry and disapproval of the job that President Donald Trump is doing. Those who disapprove of Trump's job performance are significantly more likely to experience each of these negative emotions than those who do.

The world took a negative turn in 2017, with global levels of stress, worry, sadness and pain hitting new highs. During a solid year of economic growth, the U.S. kept this negative trend going into 2018. Higher levels of stress, anger and worry nudged Americans' overall Negative Experience Index to 35 -- three points higher than any previous score to date.

The disconnect between a strong economy and Americans' increasing negative emotions illustrates how GDP and other hard economic data only tell part of the story. In fact, the levels of negative emotions in the past several years are even higher than during the U.S. recession years. Given the ties that researchers are starting to find between negative affects like these and physical health and longevity, leaders need the whole story.

Interact with the world's emotions and see how countries compare.

Results are based on telephone interviews with 1,004 adults in the U.S., aged 15 and older, conducted from Aug. 13- Sept. 30, 2018. For results based on the total sample of national adults, the margin of sampling error is ±4.0 percentage points at the 95% confidence level. The margin of error reflects the influence of data weighting. In addition to sampling error, question wording and practical difficulties in conducting surveys can introduce error or bias into the findings of public opinion polls. 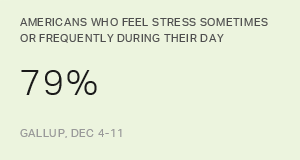 Eight in 10 Americans Afflicted by Stress

Americans are less likely to feel short on time than they did a decade ago, but their stress level hasn't changed. Work and children are the biggest factors linked to these pressures.