WASHINGTON, D.C. -- Americans' approval of Congress remains at 20% for the second consecutive month, having declined after hitting a two-year high point of 26% in March. March's slightly higher approval rating of Congress was only the third time that the measure had risen above 21% since 2011, although the reason for that increase was not clear. The latest reading, from a May 1-12 Gallup poll, stabilizes the measure closer to where it had been in recent months.

Americans' approval of Congress remains sharply polarized politically. Democrats became more positive about Congress (by 10 points) after their party assumed control of the U.S. House of Representatives earlier this year, rising to 32% in February, but that has been tempered over time and currently stands at 25%. At the same time, Republicans' approval fell from 36% in October to 14% in the latest reading. Independents' views have been relatively stable, as 22% currently approve of Congress, similar to the average 18% since January 2017. 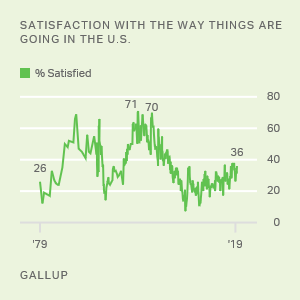 At 36%, Americans' Satisfaction With U.S. Is at 8-Month High

A majority of Americans (63%) remain dissatisfied with the direction of the U.S., but the percentage satisfied edged up to 36% in May.