PRINCETON, NJ -- Gallup's annual rating of the images of 25 business and industry sectors shows that Americans remain most positive about the restaurant and computer industries, while their most negative images are of the oil and gas industry, the federal government, and the healthcare industry. Americans have rated most business and industry sectors more negatively over time, particularly since 2003. A detailed Gallup analysis shows that six sectors have the dubious distinction of both low ratings this year and major drops in rankings over the last four years: the federal government, the oil and gas industry, the real estate industry, electric and gas utilities, the healthcare industry, and the pharmaceutical industry. Americans have lost more faith in the federal government over the last four years than any other industry sector tested, paralleling the decline in President George W. Bush's job approval ratings over that time.

The following table displays the results of the business and industry sector rankings from the Aug. 13-16, 2007, Gallup Work and Education poll. The survey asked Americans a straightforward question about 25 different business and industry sectors: "For each of the following business sectors in the United States, please say whether your overall view of it is very positive, somewhat positive, neutral, somewhat negative, or very negative."

The results are presented in terms of the combined percentages of Americans who rate each sector positively, neutrally, and negatively. The table also includes a "net positive" rating, which is the difference between the percentage of positive responses and the percentage of negative answers.

There is a wide dispersion in these ratings. At the top end of the scale, the clear majority of Americans rate the restaurant and computer industries positively, while at the bottom end of the scale, at least half or more of Americans rate the oil and gas industry, the federal government, the healthcare industry, and the pharmaceutical industry negatively.

The data tables displayed at the end of this analysis show the full trends in Americans' ratings of each of these 25 business and industry sectors over time.

It is clear that the high point for the ratings of many of these industries came in August 2003, a time at which the American public was very charitable in its ratings for almost all industry sectors (the reasons for these positive attitudes is not entirely clear). For many of these sectors, the current ratings in August 2007 represent low points.

In order to gain a better understanding of the changes in Americans' feelings about these business and industry sectors over time, the table below represents the change in the net positive ratings of each sector between 2003 and 2007. A positive number indicates the image of the sector has improved, while a negative number means the industry's ratings have worsened.

It is immediately clear from this table that Americans rate all but three business and industry sectors more negatively now than they did four years ago. This drop in Americans' attitudes toward these various sectors of American society has occurred at the same time as the public's ratings of various other aspects of society -- including the president, Congress, and the economy -- have declined. Similarly, overall satisfaction with the way things are going in the United States has also fallen to one of its lowest points in Gallup poll history.

Still, it is of interest to look at the relative differences in the rate of change in the image of these sectors over this four year period. Three sectors -- telephone, Internet, and banking -- have managed to escape the generally downward turn in Americans' attitudes, and are ranked the same or higher now compared to 2003.

At the other end of the spectrum, seven of the sectors tested have seen drops of 20 points or more in their net positive ratings over the last four years. In particular, it is important to note that the drop in the evaluation of the federal government has been more precipitous over this time period than the drop of any of the other 24 sectors tested. The oil and gas industry has undergone almost as substantial a drop since 2003, followed by the real estate industry, electric and gas utilities, the automobile industry, the healthcare industry, and the pharmaceutical industry. These sectors have either not performed well in recent years or have been controversial for earning soaring profits while charging consumers high prices for their products.

All but the one of these sectors -- the automobile industry -- is rated negatively on absolute terms. Despite its drop over the last four years, the auto industry still has a +6 net positive rating.

Six industries have the dubious distinction of being rated in negative terms on an absolute basis this year and having seen their image deteriorate significantly more than the average sector over the past four years:

Americans are in an unusually sour mood at the moment. They give low ratings to a wide variety of Gallup poll indicators, including overall satisfaction with the way things are going in the United States, ratings of the U.S. economy, ratings of the job being done by Congress, and presidential approval ratings.

Therefore, it does not come as a total surprise to find that Americans are also more negative than they have been when asked to give their opinions about a variety of business and industry sectors.

The federal government has suffered the most over the last four years, and now has a negative image exceeded only by that of the oil and gas industry. This again fits in with the finding that Americans at the moment give Congress one of the lowest approval ratings in Gallup history, and that only 14% of Americans at the moment have a great deal or quite a lot of confidence in Congress.

The other industries that receive negative ratings and that have dropped substantially in their image ratings over time include those whose services have price points that are very evident to the average American. With the rise in the price of gas at the pump, it is perhaps inevitable that Americans would rate the oil and gas industry so low. With the increase in worry and concern about access and the cost of healthcare, it is also perhaps not surprising to find that Americans rate the healthcare industry and the pharmaceutical industry so low. Home prices have fallen this year, and the publicity surrounding the sub-prime mortgage crisis no doubt has contributed to the negative image of the real estate sector. Finally, the electric and gas utilities may be rated negatively because the prices of these commodities are so evident to the average American.

The news is not all bad, however. Industries with whom the average American comes in contact on a frequent basis -- including the restaurant, grocery, computer, Internet, retail, and banking sectors -- all receive much more positive than negative ratings from Americans. Perhaps the beleaguered energy and healthcare industries can study the practices of these positively rated sectors in an attempt to figure out how they could potentially improve their own images.

Results are based on telephone interviews with 1,019 national adults, aged 18 and older, conducted Aug. 13-16, 2007. For results based on the total sample of national adults, one can say with 95% confidence that the maximum margin of sampling error is ±3 percentage points. In addition to sampling error, question wording and practical difficulties in conducting surveys can introduce error or bias into the findings of public opinion polls.

(Asked of a half sample)On another subject, for each of the following business sectors in the United States, please say whether your overall view of it is very positive, somewhat positive, neutral, somewhat negative or very negative. How about -- [RANDOM ORDER]?

B. Farming and agriculture

Americans’ views of several industries have taken major hits this year -- the real estate, banking, restaurant, grocery, airline, and retail industries have all seen declines of 10 percentage points or more in their positive ratings compared with last year.

The typical American air traveler is satisfied with the job the major airlines are doing, both on an overall basis and with a number of specific aspects of flying. There has been little change in reported satisfaction in the last seven years. Air travelers’ biggest complaint is with the comfort of airline seating.

Lobbyists Debut at Bottom of Honesty and Ethics List

Americans rate lobbyists, car salesmen, and advertising practitioners as having the lowest honesty and ethical standards of 22 professions tested in Gallup’s annual update. Nurses, as usual, rate at the top of the list. Ratings of congressmen have reached a new low. 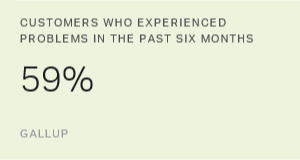 The Silver Lining of Customer Problems

When companies handle problems effectively, they can end up with higher customer engagement than before the problems occurred.