skip to main content
World
Kyrgyzstanis Souring on Leadership, Life Ahead of Turmoil

WASHINGTON, D.C. -- Before the recent unrest gripping Central Asia's only democracy, Kyrgyzstanis were souring on President Sooronbai Jeenbekov, who resigned Thursday in response to the protests. While the majority (57%) approved of his job performance in 2019, his approval rating had dropped 20 percentage points since his first year in office in 2018. Jeenbekov's predecessor, Almazbek Atambayev -- who has been arrested for organizing riots -- never saw ratings lower than 61%. Line graph. Kyrgyzstanis' approval for former Presidents Sooronbai Jeenbekov and Almazbek Atambayev. From 2012 to 2017, approval for Atambayev never dropped below 61%, while approval of Jeenbekov fell from 77% in 2018 to 57% in 2019.

Civil unrest has rocked Kyrgyzstan since the country's recently annulled parliamentary elections on Oct. 4, which opposition parties claim were rigged. Political parties allied with Jeenbekov allegedly won the largest share of the vote, and Kyrgyzstanis' frustration with Jeenbekov and the measures he had implemented to control COVID-19 spilled out into the streets.

Kyrgyzstanis have not placed much faith in the honesty of the country's elections over the past 15 years -- during which they have ousted two previous leaders. Before the most recent parliamentary elections, 30% expressed confidence in their elections. That 30% is down from the trend-high 41% in 2016, but well above the low of 14% in 2010, after the country's 2009 presidential election that was marred by a violent crackdown by the incumbent Kurmanbek Bakiyev. Before COVID-19, Kyrgyzstanis' Situations Not Improving

Compounding Kyrgyzstan's political problems is the fact that substantial percentages of the country's population were continuing to struggle economically before the COVID-19 pandemic. In the most recent survey, from 2019, 36% of Kyrgyzstanis had been unable to afford food at times in the past 12 months and 43% reported struggling to afford shelter. Although the current figures fall short of the record highs, both measures have been elevated for the past several years. Before the COVID-19 pandemic and the recent turmoil gripping their country, Kyrgyzstanis had already started to sour on Jeenbekov. It is unlikely that the unpopular measures Jeenbekov imposed to control COVID-19 -- including closing the country's borders and closing down nonessential businesses, as well as a perceived failure to provide assistance to the public -- earned him more fans.

The economic effects of the pandemic, added to perceptions that political parties allied to Jeenbekov bought votes and took other measures to influence the election, were sufficient to spark widespread protests. Protesters have rallied around Atambayev, who had been imprisoned after being convicted of corruption charges. Jeenbekov's resignation marks the third time in 15 years that popular protests have brought down a president in Kyrgyzstan.

These results are based on face-to-face interviews with approximately 1,000 adults, aged 15 and older, conducted in 2019 in Kyrgyzstan. For results based on the total sample of national adults, the margin of sampling error is ±3.6 percentage points at the 95% confidence level. All reported margins of sampling error include computed design effects for weighting.

Gallup surveys in Kyrgyzstan in the past several years reflect the ethnic tensions that sparked recent deadly riots in the country's South. In 2009, 40% of Kyrgyzstanis living in the South said their communities are good places for racial and ethnic minorities, compared with 61% who said the same in the North. 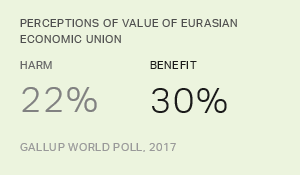 Since it was established in 2015, residents in the five member countries of the Eurasian Economic Union have been more likely to say the EEU has benefited, rather than harmed, their countries. However, many are also still unsure.