WASHINGTON, D.C. -- Gallup's 2021 update on minority rights and relations finds that an increasing percentage of U.S. adults believe racism against Black people is widespread in the United States. Relatedly, Americans' satisfaction with the treatment of Black people remains near its historical low.

Sixty-four percent of Americans believe racism against Black people is widespread in the U.S., a slight, but not statistically meaningful, increase from 2016 (61%). It is the highest in the trend of five total readings since 2008, the three most recent of which are 60% or higher.

Non-Hispanic Black (84%) and Hispanic (72%) respondents are more likely than U.S. adults, generally, to say racism is widespread. Non-Hispanic White respondents (59%) are less likely to believe it is. 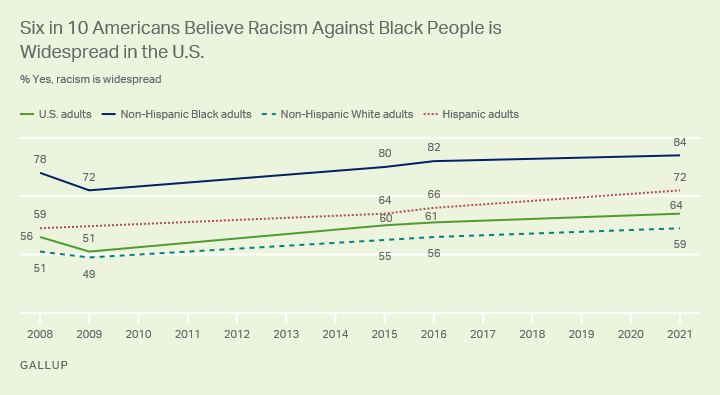 Line graph. Sixty-four percent of Americans, including 84% of Black adults, 72% of Hispanic adults and 59% of White adults believe racism against Black people is widespread in the U.S. All figures are the highest Gallup has measured to date, though generally similar to what Gallup measured the last time it asked the question, in 2015 and 2016. In 2008 and 2009 surveys, fewer Americans, and fewer of those in each racial and ethnic subgroup, thought racism against Black people was widespread.

The results are based on a June 1-July 5 Gallup survey that included oversamples of Black and Hispanic adults to allow for more precise estimates of those subgroups. The overall sample was weighted so all racial and ethnic groups were represented in their proper proportions of the U.S. population.

Americans became more likely in 2015 than they were in the prior measure, in 2009, to say racism against Black people is widespread. This was after several high-profile incidents in which Black people were killed in encounters with police officers. The percentage believing racism is widespread reached 60% that year and has stayed above that level since, with modest increases in the 2016 and 2021 surveys. Gallup did not ask this question in 2020, so it is not clear if perceptions of racism were higher in the immediate aftermath of the George Floyd killing and news reports of racism toward Black people in everyday situations, including a man birdwatching in Central Park and a family using a hotel's swimming pool.

In addition to the racial group differences, there is a wide partisan gap in perceptions that racism is widespread, with 91% of Democrats, compared with 34% of Republicans and 62% of independents, believing it is.

Asked to assess progress for Black Americans' civil rights during their lifetimes, 69% of U.S. adults say the situation has improved, an increase from the low point of 59% last year. However, Americans remain less optimistic today than they were before 2020, when as many as 89% in 2011, during Barack Obama's first term as president, believed progress had been made. 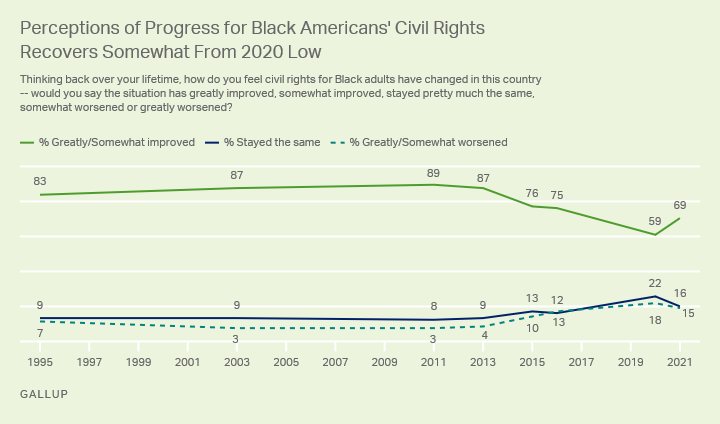 Line graph. Sixty-nine percent of U.S. adults in 2021 say civil rights for Black people have greatly or somewhat improved during their lifetimes. This up from 59% in 2020 but lower than readings taken from 1995 to 2016, which range from 75% in 2016 to 89% in 2011. Sixteen percent currently say civil rights have stayed the same for Black people, while 15% say they have greatly or somewhat worsened.

Those who say civil rights have improved today are far more likely to say they have "somewhat improved" (44%) than to say they have "greatly improved" (25%). In most years before 2020, the two responses were more evenly split. In 2011, when opinions about Black adults' civil rights were most positive, 50% said conditions had greatly improved and 39% somewhat improved. 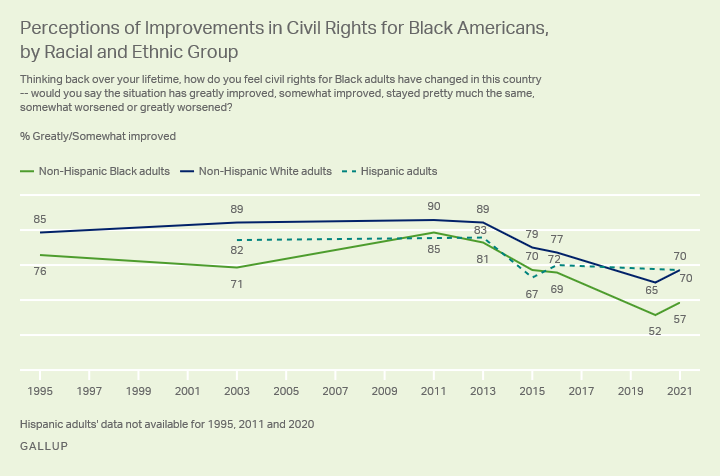 Americans are less likely to believe there is unequal treatment of Black people in other everyday situations in their community, with between 28% and 34% saying Black people are treated less fairly at work, in stores or restaurants, and when getting healthcare.

Black Americans are much more likely than White or Hispanic Americans to perceive unequal treatment in all six situations tested in the poll. In fact, majorities of Black Americans perceive unequal treatment in all six situations except for restaurants, which is just shy of a majority at 47%. Meanwhile, at least half of White and Hispanic Americans believe that Black people are treated less fairly in just one situation, dealing with police.

Over time, members of all racial groups have become more likely to perceive that Black people in their community are treated less fairly than White people in these situations. Several of the items registered new highs among national adults and among the major racial and ethnic groups this year, while the remainder are near their historical high points. 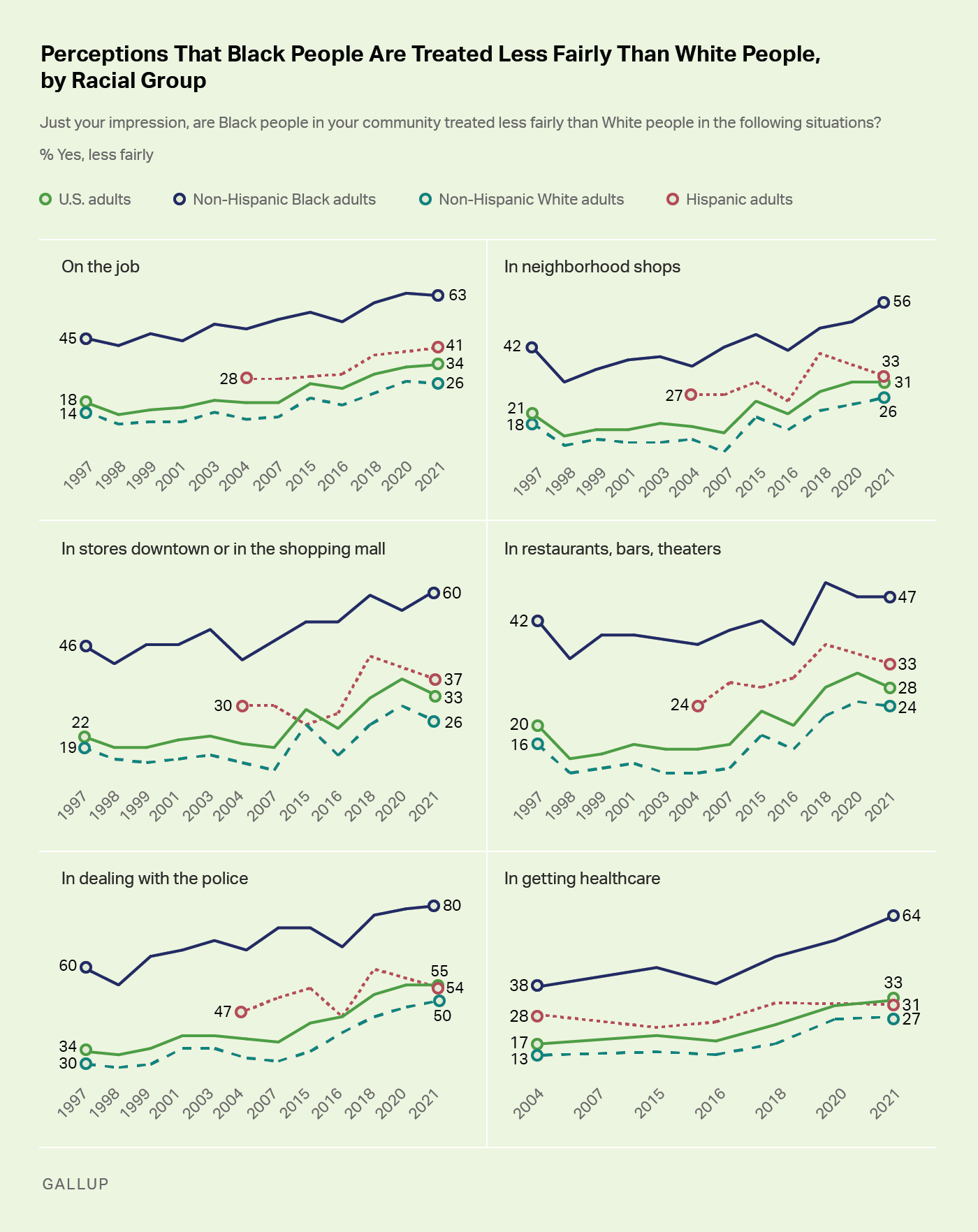 Overall, Americans remain much more likely to say they are dissatisfied (61%) than satisfied (38%) with the way Black people are treated in society. Both figures are slightly improved from last year, when satisfaction levels were the lowest measured to date.

As on other racial matters, Americans were much more positive before 2015 about the way society treated Black people, when consistent majorities were satisfied. In 2015, satisfaction fell to 49%, before registering a low of 35% last year. 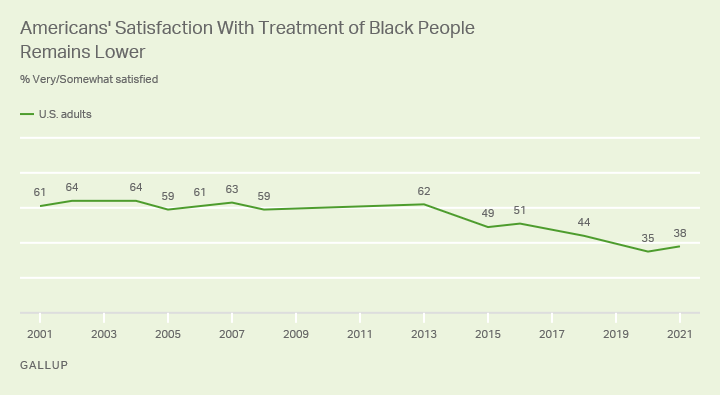 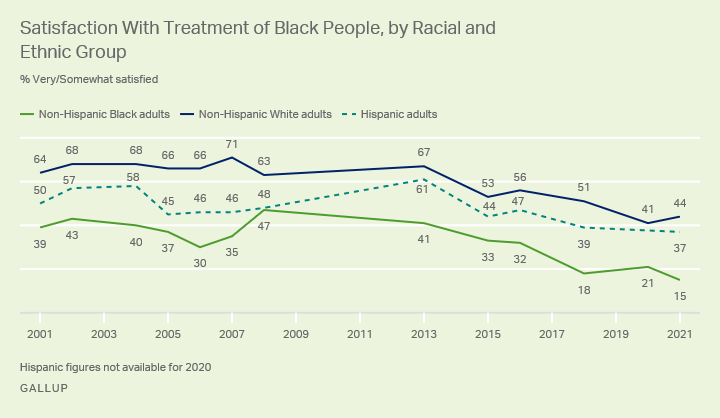 Partisans also differ greatly in their satisfaction with the treatment of Black people, as 68% of Republicans, 40% of independents, and 14% of Democrats are satisfied.

Americans continue to be concerned about the treatment of Black people in the U.S., with that concern increasing significantly since 2015, particularly in the past two years amid a greater public awareness and sensitivity to racial inequities.

U.S. adults still see progress on Black Americans' civil rights during their own lifetimes, but are less inclined to say this than in the past.

Black Americans continue to be mostly pessimistic about the situation for Black people in the U.S., and much more so than White or Hispanic Americans are.

With most Americans believing racism is widespread, satisfaction with treatment of Black people near record lows, and fewer today than in the past seeing progress toward civil rights, the environment for meaningful change in public policy and society seems favorable. However, as occurred with federal legislation on police reform last year, partisan disagreements over what should be done could prevent formal public policy changes from being made.