In the past year, two of these industries experienced significant declines that punctuated the downward trend. The internet's positive image tumbled 14 percentage points to 35%, while radio and television fell eight points to 33%. Meanwhile, the computer and publishing industries saw minor dips, but enough to push them to record lows of 51% and 32%, respectively, in Gallup's two-decade trend. 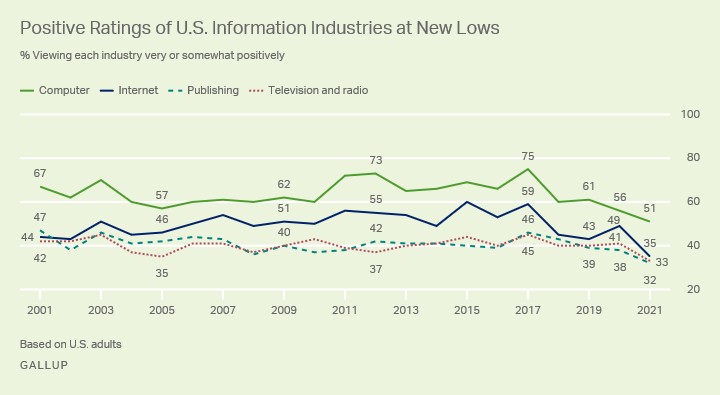 Gallup has measured Americans' views of a variety of U.S. business and industry sectors each year since 2001, asking respondents whether their overall view of each of 24 industries plus the federal government is very positive, somewhat positive, neutral, somewhat negative or very negative. The latest results are based on an Aug. 2-17 national survey.

Nine of the business sectors suffered significant image declines between 2020 and 2021. In some cases, such as with healthcare and farming, this reflected a return to 2019 levels after they rose in 2020 due to pandemic-related boosts in public support. However, that is not the case with these four information-based industries, which have been losing public support since hitting their peak levels in 2017.

The four information sectors are the only industries that reached new lows this year in the Gallup trends.

What Goes Up Must Come Down -- but Not This Much

2017 was a banner year for business image ratings more generally; the average 50% positive rating across all 24 sectors (excluding the federal government rating and looking only at businesses) is the highest in Gallup's trend. This was driven by surges in positive views about many industries among Republicans, likely a halo effect of President Donald Trump's taking office, while Democrats' ratings were flat or down slightly.

Both Republicans and Democrats are less likely to view all four information industries positively today than they were in 2017, but the decline has been steeper among Republicans.

While Republicans' reduced regard for information companies may partly reflect the transition back to a Democratic president, erasing the Trump effect, the 2020-2021 drops are larger than past declines spanning a presidential transition. They do, however, correspond with other Gallup polling that shows Republicans souring on Big Tech and big business more generally after Trump was banned from social media, publicity about major publishers eschewing or canceling conservative-oriented books, and recent GOP calls for more regulation of companies like Amazon and Google.

Republicans' distrust of the news media more generally stretches back much further, with a sizable partisan gap in trust emerging in 2001 and expanding ever since.

Positive Ratings Have Plunged Among Republicans

Positive views of the internet industry declined this past year among both major U.S. partisan groups but fell a much larger 18 points among Republicans and Republican-leaning independents to 28%, compared with an eight-point decline among Democrats and Democratic leaners to 42%. 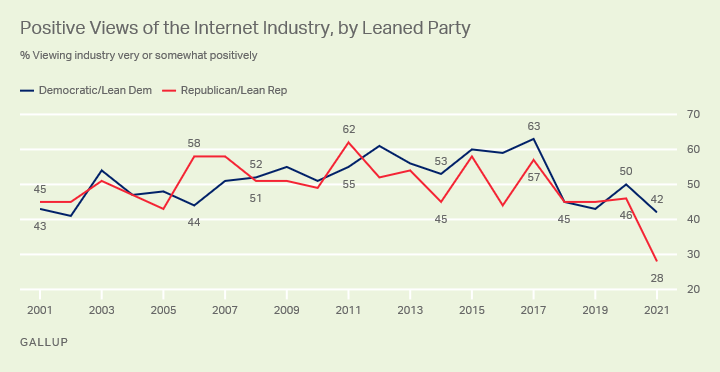 Line graph. 2001-2021 trends in positive ratings of the internet industry among Democrats/Democratic leaners and Republicans/Republican leaners. Partisan views were similar in most years, but a sizable gap opened up this year, with Republicans' positive rating dropping to 28% from 46% in 2020, while Democrats' rating dropped only eight points, from 50% to 42%. 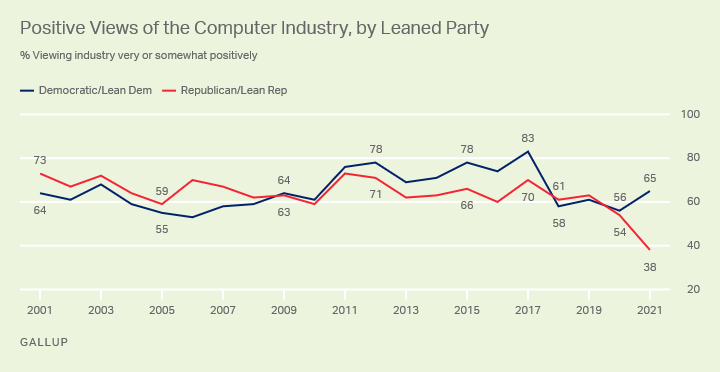 Line graph. 2001-2021 trends in positive ratings of the computer industry among Democrats/Democratic leaners and Republicans/Republican leaners. Partisan views were similar in most years, but a sizable gap opened up this year, with Republicans' positive rating dropping to 38% from 54% in 2020, while Democrats' rating increased to 65% from 56%.

Television and radio suffered a 15-point decline in positive ratings from Republicans this year, to 21%, while its image was statistically flat among Democrats, at 45%, similar to the 41% in 2020. 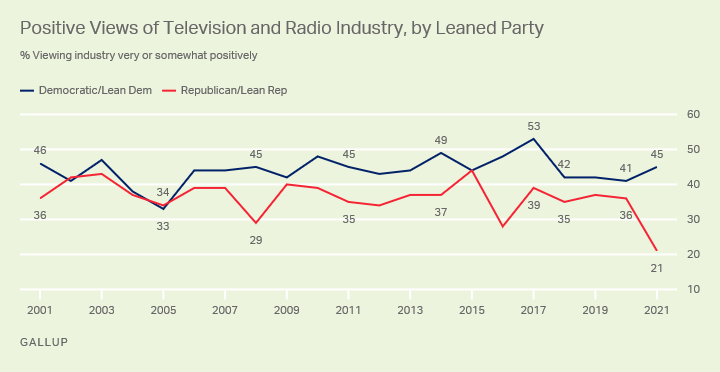 Line graph. 2001-2021 trends in positive ratings of the television and radio industry among Democrats/Democratic leaners and Republicans/Republican leaners. Democrats have had no more than a moderately more positive view than Republicans of the TV/radio industry in most years since 2001, but the partisan gap expanded sharply this year as Republicans' positive rating plunged to 21% from 36% in 2020. Meanwhile, Democrats' rating is stable at 45%, similar to the 41% in 2020.

Although positive views of the publishing industry are now at a record-low 32%, the decline among party groups over the past year is not statistically significant -- dipping eight points among Republicans to 20% and four points among Democrats to 43%. But the long-term trend among Republicans has been downward, particularly since 2019, while Democrats' views of publishing have been fairly stable over the past two decades. 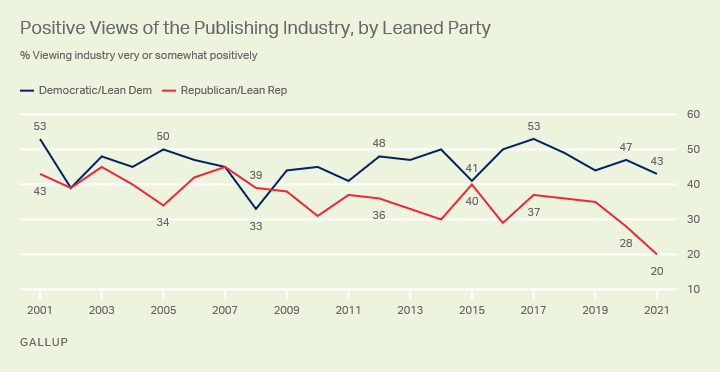 Line graph. 2001-2021 trends in positive ratings of the publishing industry among Democrats/Democratic leaners and Republicans/Republican leaners. Democrats have had a more positive view than Republicans of the publishing industry in most years since 2001, but the partisan gap has gradually widened, and it expanded further this year with Republicans' positive rating falling to 20% from 28% in 2020. Meanwhile, Democrats' rating is stable at 43%, similar to the 47% in 2020.

Republicans Most Negative Toward TV and Radio Industry

When the totality of their ratings of each industry are taken into account, Republicans have a significantly more negative than positive view of the television and radio industry, with nearly three times as many viewing it negatively (59%) rather than positively (20%). Their views of the internet and publishing industries also skew negative, although less strongly than for television and radio. Meanwhile, Republicans maintain a somewhat more positive than negative view of the computer industry, with many viewing it neutrally.

By contrast, Democrats are more likely to view all four information industries positively than negatively; however, the positive skew is far stronger for the computer than for the internet industry.

The past four years have seen an unprecedented change in how Americans view the economic sectors that create and dispense much of the information they consume. After 17 years of stability or improvement in how Americans saw the computer, internet, publishing, and television and radio industries, these industries' positive scores have diminished.

Politics accounts mainly for this trend, with Democrats greatly souring on these industries in 2018 and Republicans doing likewise this year. The major difference is that Democrats' views of these industries have not moved as much, or at all, in a positive direction after the Trump-Joe Biden transition as Republicans' did after the Barack Obama-Trump transition four years ago.

The real-world effects are still evolving but could span both how Americans use these industries' services in their daily lives -- something already seen in Republicans' heavy reliance on conservative sources, like Fox News, to the exclusion of the broadcast networks -- and the policies Republican and Democratic officeholders pursue to influence and regulate these industries.

Results for this Gallup poll are based on telephone interviews conducted Aug. 2-17, 2021, with a random sample of 1,006 adults, aged 18 and older, living in all 50 U.S. states and the District of Columbia.

Workers' satisfaction with safety conditions has returned to its pre-pandemic level, topping a list of 13 job aspects along with coworker relations.