WASHINGTON, D.C. -- Of 25 key U.S. business sectors, Americans' views of nine have worsened significantly since 2020 and none of the others have improved appreciably. Six of these nine industries show double-digit decreases in positive ratings: healthcare, oil and gas, electric and gas utilities, internet, retail, and farming and agriculture. The other three -- the grocery, airline, and television and radio industries -- show smaller though still substantial drops in positivity.

Changes of more than seven percentage points are considered statistically meaningful, and declines in positive ratings of more than 10 points have been rare over the 21 years that Gallup has measured Americans' overall impressions of business and industry sectors.

Along with the internet industry, positive ratings for the computer, publishing, and television and radio industries are all at new lows.

Average Positive Ratings for 25 Industries at Lowest Points Since 2011

The latest results, from an Aug. 2-17 poll, show a six-point drop in the average positive rating across the 25 industries, which include 24 that have been tracked since 2001 and one, the federal government, that was added in 2003. The latest 39% average is the lowest since 2011 but shy of the record-low 34% in 2008 when Americans' economic confidence fell sharply amid the Great Recession. 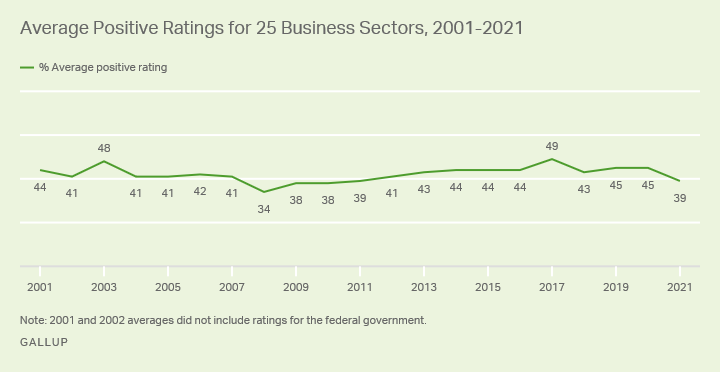 Line graph. The average positive rating across the 25 business industries since 2001. The latest 39% is down six points since last year and is the lowest since 2011 but higher than the record low 34% in 2008.

Less positive ratings from Republicans have fueled the decline for most industries. The average positive rating across the 25 industries among Republicans and Republican-leaning independents is 32%, the lowest for either major party group in Gallup's trend. The current figure represents a sharp drop from 48% in 2020, when Republican Donald Trump was president. Typically, partisans are more charitable in their industry ratings when a president of their own party is in office.

Democrats and Democratic-leaning independents' average 46% positive rating is slightly better than the 42% averages in both 2019 and 2020. Democrats' average ratings were higher between 2014 and 2017 than they are now, with the 50% average in 2017 the highest for that group. Republicans' average 51% rating in 2003 is the highest for either party. 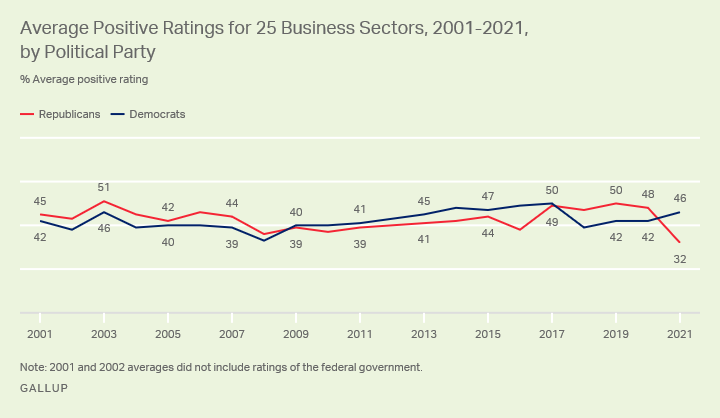 Republicans rate every industry less positively this year than last year, with the exception of the sports industry, which already had a low rating among Republicans (24%) after a sharp drop last year. The biggest drops among Republicans this year are for the federal government (down 28 points), the oil and gas industry (down 26 points), and electric and gas utilities (down 25 points).

Changes among Democrats are mixed, with 15 sectors rated at least slightly more positively than a year ago, one (the grocery industry) showing no change and nine rated at least slightly less positively than last year. The biggest changes for Democrats are a 20-point increase in ratings of the federal government following Joe Biden's inauguration and a 15-point increase in ratings of the pharmaceutical industry. The largest declines among Democrats are for the healthcare and internet industries, both eight points lower than a year ago.

A full list of the changes by party is shown in a table at the end of this article.

Majorities of Americans now rate just four of the 25 sectors positively -- farming and agriculture (59%), the restaurant industry (58%), the grocery industry (54%), and the computer industry (51%).

At the other end of the spectrum, the federal government remains in the bottom spot, with 26% of U.S. adults expressing positive views of it. Several other sectors are not far behind, with fewer than one-third viewing them positively -- including the oil and gas industry (28%), the pharmaceutical industry and the legal field (31% each), and the publishing industry (32%). 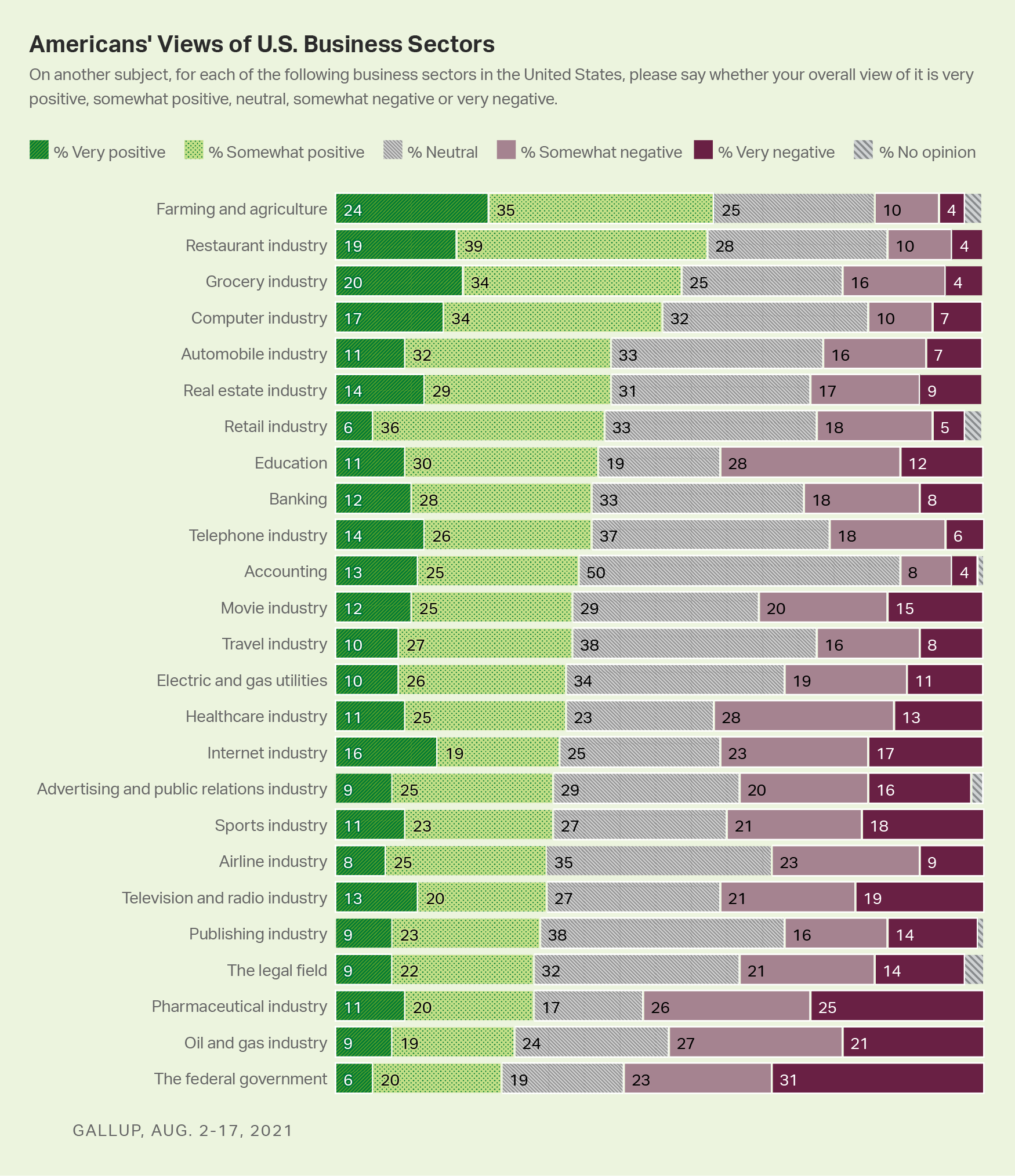 Bar graph. Americans' ratings of 25 business industry sectors from an Aug. 2-17 poll. Majorities of Americans now rate four of the 25 sectors positively -- farming and agriculture (59%), the restaurant industry (58%), the grocery industry (54%), and the computer industry (51%). Meanwhile, the federal government remains in the bottom spot with 26% of U.S. adults expressing a positive view of it. Several other sectors are not far behind with fewer than one-third viewing them positively, including the oil and gas industry (28%), pharmaceutical and legal fields (31% each), and publishing industry (32).

The federal government has been the lowest-rated industry each year since 2014, tying with the pharmaceutical industry in 2016, which has also tended to have low ratings. Before 2014, the oil and gas industry was usually rated the lowest, although its ratings have been better in recent years (before this year) when U.S. gasoline prices have been lower.

Americans are feeling less positive about nearly every major U.S. business sector this year than they were a year ago. The healthcare industry, the pharmaceutical industry, and farming and agriculture were unable to sustain gains in positive ratings that were likely tied to their roles in addressing problems caused by the pandemic last year.

Declining positivity toward business sectors this year is largely because of sharp drops in Republicans' ratings of these industries. It is not unexpected to see ratings decline among a party group after its party has lost control of the White House. However, the steep drop among Republicans this year is far greater than any previous drop for a party group. Republicans' pessimism is consistent with their low levels of satisfaction with the way things are going in the U.S. To some degree, it may reflect a more antagonistic view of big business among supporters of the party than in the past, perhaps tied to some businesses taking stands on social issues such as racial justice and voting rights that are more in line with Democratic than Republican policies.

Results for this Gallup poll are based on telephone interviews conducted Aug. 2-17, 2021, with a random sample of 1,006 adults, aged 18 and older, living in all 50 U.S. states and the District of Columbia.

Each industry was rated by a randomly chosen half sample of respondents, totaling approximately 500 for each. Results for each industry have a margin of sampling error of ±5 percentage points at the 95% confidence level. All reported margins of sampling error include computed design effects for weighting.

Workers' satisfaction with safety conditions has returned to its pre-pandemic level, topping a list of 13 job aspects along with coworker relations.