WASHINGTON, D.C. -- Eight months after President Joe Biden's inauguration, his job approval rating has fallen six percentage points to 43%, the lowest of his presidency. For the first time, a majority, 53%, now disapproves of Biden's performance.

These findings are from a Sept. 1-17 Gallup poll that was conducted after the U.S. military evacuated more than 120,000 people from Afghanistan. The United States' exit from the nation's longest war was marred by the Taliban's quick takeover of most of the country and a suicide bombing at the airport in Kabul, which killed 13 U.S. service members. Over the same period, COVID-19 infection rates, nationally, were surging, leading to hospital overflows in some regions. 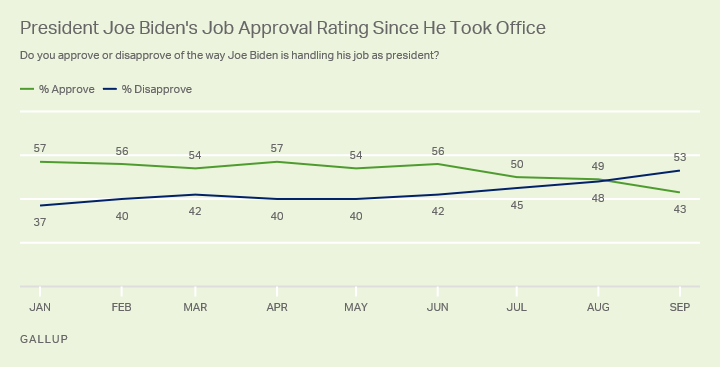 Line graph. Joe Biden's presidential job approval ratings since Biden took office. Forty-three percent of Americans approve of the job Biden is doing as president, down six percentage points since August and the lowest of his presidency.

The latest drop in Biden's job approval score is the second significant decline since June. Biden's honeymoon ratings near 55% first faltered in July, falling to 50% amid rising COVID-19 cases caused largely by the delta variant. In Gallup's Aug. 2-17 poll, Biden's rating was essentially unchanged, at 49%.

Midway through the most recent poll's field period, as U.S. COVID-19 cases, hospitalizations and deaths continued to rise, Biden announced new directives to limit the spread of the disease, including vaccine requirements for private-sector businesses, healthcare workers and federal government contractors.

Except for Donald Trump, every U.S. president since Harry Truman has enjoyed a honeymoon period characterized by above-average approval ratings upon taking office. Biden's recent slides in approval put him in the company of Trump and Bill Clinton, whose ratings were at or below Biden's current 43% at some point in the first eight months of their presidencies. However, by September 1993, Clinton's approval ratings began to recover and averaged 50% that month. Thus, among elected presidents since World War II, only Trump has had a lower job approval rating than Biden does at a similar point in their presidencies.

Democrats' approval of the job Biden is doing has remained high and not varied by more than eight points since he took office. Their highest rating of Biden was 98% in late January/early February, and their lowest is the current 90%. Republicans' ratings of Biden are similarly stable at the other extreme, ranging from 12% in February and July to 6% this month.

Independents have shown the greatest variation in their opinions of how Biden is doing. Biden's current 37% approval rating among independents is his lowest to date and 24 points below his personal high of 61%. Two-thirds of Biden's slide among independents since he took office has occurred in the past three months. 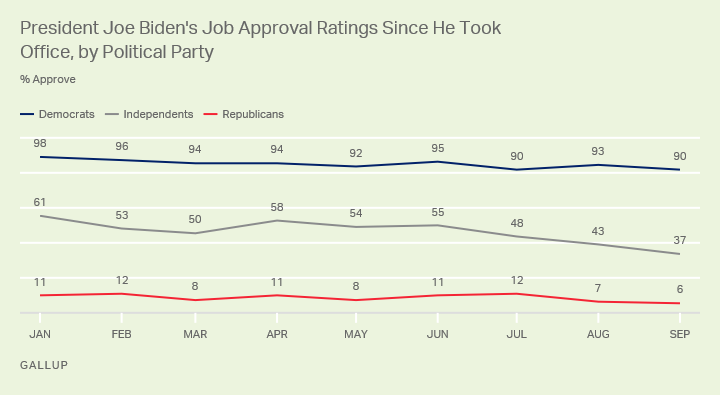 A look back at comparable September approval ratings of Biden's four predecessors shows that his 37% approval rating among independents today is greater than Trump's 31% but lower than Barack Obama's 46%, George W. Bush's 44% and Clinton's 43%.

For the first time, Gallup asked Americans to evaluate how Vice President Kamala Harris is doing in her role. Her ratings are better than Biden's by six points, with 49% approving and 49% disapproving.

At that time, Biden had a 49% approval rating, identical to Harris' now, but fewer (39%) disapproved of Biden and more (10%) did not have an opinion. Yet, in contrast to today's pattern with Harris exceeding Biden in approval, in 2009, Biden's rating lagged behind Obama's 61% approval by 12 points.

Harris enjoys nearly unanimous approval from Democrats (92%) while receiving very low approval from Republicans (4%). Her overall approval rating is higher than Biden's primarily because independents rate her performance better than they rate Biden's, 46% versus 37%, respectively.

In addition to her high approval rating among Democrats, Harris receives majority-level approval from Democratic-leaning groups, including women, young adults, college graduates and those with annual household incomes under $100,000.

The poll also finds 27% of Americans approving and 69% disapproving of the job Congress is doing. These figures have been steady since June but are down from 36% approval in March.

More broadly, Gallup has tracked Americans' satisfaction with the way the U.S. is being governed annually since 2001. The latest reading finds that 30% of U.S. adults are satisfied with the nation's governance. Since 2010, satisfaction has consistently registered below 40%; it was last above 50% in 2003.

Biden's latest approval rating further cements the fact that the honeymoon phase of his presidency is behind him. Political independents, who were part of the coalition that helped him defeat Trump in 2020, now largely disapprove of the job he is doing as president.

Though Americans were generally supportive of the U.S. withdrawal of troops from Afghanistan, the chaotic and deadly way in which it was executed has played into the decrease in Biden's approval rating. So, too, has the ongoing COVID-19 pandemic.

Although Vice President Harris' approval rating is slightly higher than the president's, she is also underwater with independents. Americans continue to rate Congress' job negatively and to express general dissatisfaction with the way the nation is being governed.