WASHINGTON, D.C. -- Donor countries pledged more than $1.2 billion last week to ward off an impending humanitarian crisis in Afghanistan, as U.N. Secretary-General Antonio Guterres warned of "the collapse of an entire country." There are concerns that rising hunger and severe drought may compound an already perilous situation in Afghanistan as the Taliban assert control over the national government for the first time since 2001.

Gallup World Poll data in recent years have painted an increasingly difficult economic situation throughout the country as Afghans have struggled to afford even the basics. In November/December 2019, just before the February 2020 signing of the U.S.-Taliban peace deal, more than seven in 10 Afghans (72%) reported that there had been times in the past 12 months when their household lacked enough money for food. This marked a 15-percentage-point increase from 2018 and a new high since Gallup first began measuring this item annually in Afghanistan in 2008. 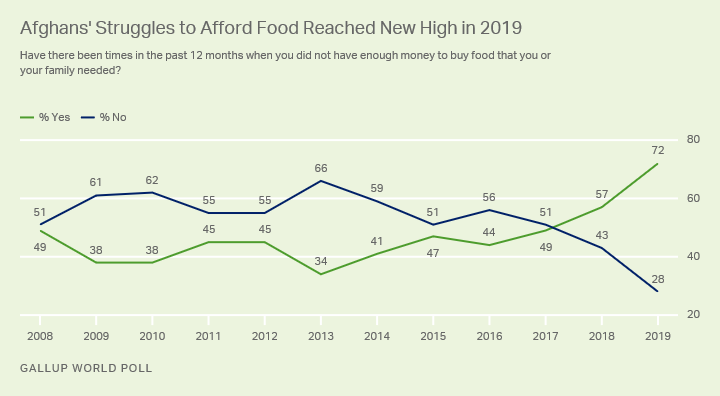 Line chart. Trend line showing the percentage of Afghans who struggled to afford food. A record 72% in 2019 could not afford food at times for themselves or their families.

After Kabul fell to the Taliban in August, U.N. agencies have warned of disruptions in the distribution of emergency aid, even calling for a "humanitarian airbridge" to be put in place to ensure medicines and hospital supplies are delivered. But while the collapse of the former Afghan government has exacerbated the country's humanitarian crisis in recent weeks, the Food and Agriculture Organization of the United Nations (FAO) has been sounding alarm bells for months, warning of a potential 25% reduction in wheat yields in 2021, a crop that provides half of all caloric intake in the country.

More economic pain may be in store for Afghanistan as a cash-strapped Taliban government asserts control of the country. At least $10 billion of central bank funds remain outside the reach of the country's new authorities, money badly needed to help pay salaries and keep government ministries and programs running. Disruption within the financial system has already reached ordinary Afghans as well, as local banks remain closed -- creating a cash shortage for residents and businesses and a resulting decrease in economic activity at a time of already heightened economic uncertainty. 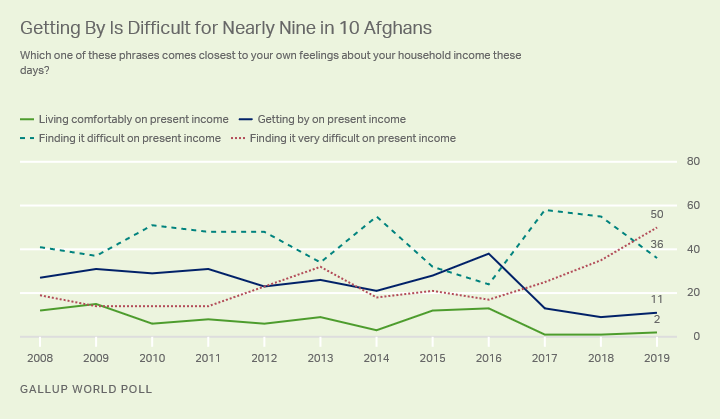 After 20 years of insurgency, Afghanistan's new Taliban government must now turn its attention to governing. Already among the world's poorest countries, Afghans' economic outlook had taken a turn for the worse in recent years, a situation now further compounded by regional drought, isolation from the world financial system and political uncertainty.

Both Afghans and the world wait to see if the Taliban's assurances of moderation on many issues will come to pass or if the new regime will behave similarly to its last time in power from 1996 to 2001. Humanitarian pledges from the international community show a continued commitment to the people of Afghanistan and a willingness to engage, even if not recognize, Afghanistan's new rulers.

Recent developments in Afghanistan have increased the vulnerability of many Afghans who had already struggled for the basics of survival. The likelihood of a reduced wheat harvest this year in the face of severe drought threatens to push the country toward famine just as the Taliban takes the helm of the country's ministries. The Taliban's willingness to work alongside international aid agencies to address the impending food crisis poses an early test of the new government's ability to meet the needs of its population and gain a degree of acceptance among nations. While the Taliban has proven its staying power as an insurgent force, it may yet find that it was easier fighting people than feeding them.

These results are based on face-to-face interviews with 1,000 adults, aged 15 and older, conducted in Afghanistan Nov. 3-Dec. 15, 2019. For results based on the total sample of national adults, the margin of sampling error is ±3.4 percentage points at the 95% confidence level. The margin of error reflects the influence of data weighting. In addition to sampling error, question wording and practical difficulties in conducting surveys can introduce error or bias into the findings of public opinion polls.