WASHINGTON, D.C. -- Americans generally approve of President Joe Biden's Sept. 9 plan mandating that millions of U.S. workers be vaccinated against COVID-19. Roughly six in 10 U.S. adults are in favor of those requirements for federal government workers, employees of large companies, and workers at hospitals that receive federal healthcare funds. There is greater support, 68%, for requiring companies to give employees paid time off to get vaccinated or to recover from vaccine side effects.

These results are based on Gallup's COVID-19 tracking survey, which was conducted Sept. 13-19, in the days after Biden announced his plan.

Americans generally support vaccination mandates, including for air travel, attendance at crowded events, and other activities. The latest poll also finds 63% of U.S. adults in favor of vaccination requirements for teachers and staff in K-12 schools, something the New York and Los Angeles school districts, among others, have adopted.

Biden clearly has the backing of his fellow Democrats, with more than nine in 10 favoring all four elements of his plan that were tested in the survey. Independents' opinions are mixed, while Republicans oppose all four proposed actions. Both independents and Republicans are more likely to favor vaccination mandates for workers at hospitals receiving federal funds and paid time off for employees who get vaccinated than the other two mandates.

Employees' reports that their employer was requiring them to get vaccinated roughly doubled to 19% in August, even before Biden unveiled his plan. In the new poll conducted the first week after Biden's announcement but before workplaces are required to comply, that number has jumped another 10 points to 29%. The new reading is also the first since the Food and Drug Administration voted on Aug. 23 to give full approval to the Pfizer-BioNTech vaccine, the first COVID-19 vaccine to receive that designation. 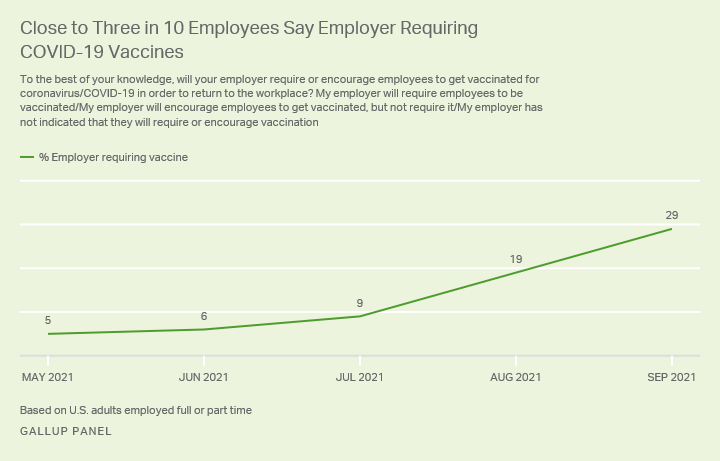 Line graph. Twenty-nine percent of U.S. workers in September 2021 say their employer is requiring employees to receive a COVID-19 vaccine in order to return to the workplace. The percentage has grown from 5% in May to 9% in July and 19% in August.

As more workers report that their employer has a vaccine requirement in place, the percentage saying their employer is recommending it has decreased, from 62% in July to 55% in August and 45% currently. There has been little change in recent months in the share of employees who say their employer has not indicated a COVID-19 vaccination policy.

Employees are also becoming increasingly likely to favor employee vaccination mandates -- 58% currently say they strongly favor or favor such policies, up from 52% in July and August, and 49% in June. 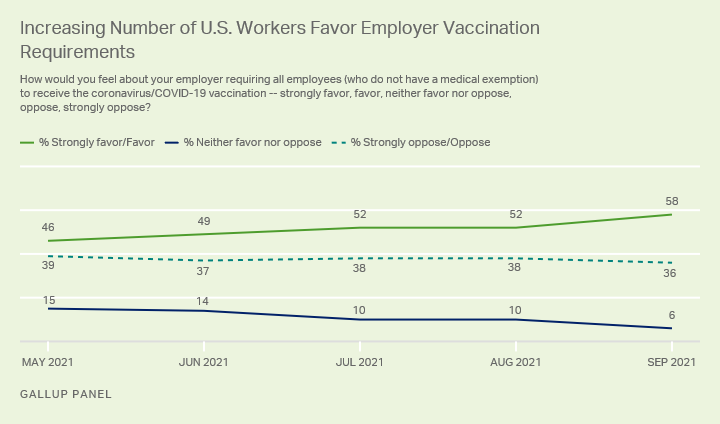 Line graph. Fifty-eight percent of U.S. workers in September 2021 say they strongly favor or favor their employer requiring employees to receive a COVID-19 vaccine. The percentage has grown from 46% in May to 49% in June and 52 in both July and August. Thirty-six percent of employees oppose such a requirement, a percentage that has been mostly steady since May. Six percent say they neither favor nor oppose such a requirement, which is down from 15% in May and 10% in July and August.

Opposition to employer vaccination requirements has been fairly steady since the spring, ranging narrowly between 36% and 39%. But most of those who are opposed hold that opinion strongly. This month, 29% of workers say they strongly oppose their employer's requiring vaccines.

Likewise, most who favor employer vaccination mandates do so strongly, with 46% of U.S. workers strongly favoring that policy this month.

Biden's plan to require millions of U.S. workers to be vaccinated against COVID-19 has been controversial, and many state governments and other institutions have sued to prevent it from taking place. While those cases have yet to be decided, Biden does have public opinion on his side. Majorities of Americans favor vaccination requirements in a variety of situations, including at the workplace, the target of Biden's mandate.

Results for this Gallup poll are based on self-administered web surveys conducted Sept. 13-19, 2021, with a random sample of 4,034 adults, aged 18 and older, who are members of the Gallup Panel. Gallup uses probability-based, random sampling methods to recruit its Panel members.

For results based on the sample of U.S. adults, the margin of sampling error is ±2 percentage points at the 95% confidence level.

For results based on the sample of 2,291 adults employed full or part time, the margin of sampling error is ±3 percentage points at the 95% confidence level.

The percentage of U.S. workers who say their employer is requiring employees to be vaccinated against COVID-19 has doubled in the past month.