WASHINGTON, D.C. -- Americans' approval of the job the 117th Congress is doing slipped six points in the past month to 21%, its lowest thus far in 2021. 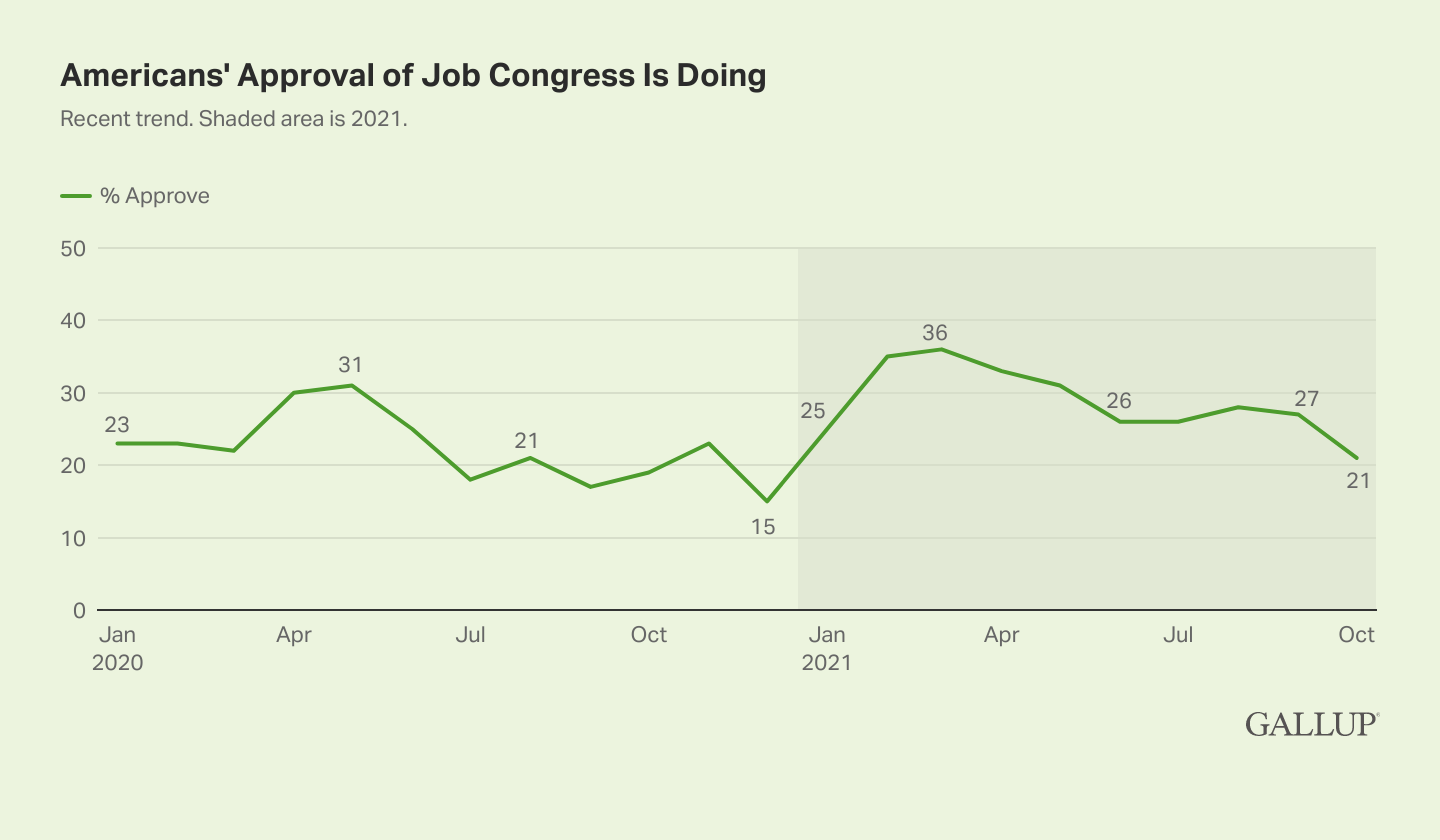 Line graph. Monthly trend from January 2020 to October 2021 in percentage of Americans who approve of the job Congress is doing. Approval ranged from 15% to 31% in 2020, with the low point coming in December. It rose in the first quarter of 2021, reaching a peak of 36% in March. After that, it slowly declined and is 21% in October.

While still better than the 15% approval rating at the end of the divided 116th Congress in December, today's reading is well below this year's high point of 36%. That was measured after Congress passed the latest COVID-19 economic relief package, known as the American Rescue Plan Act of 2021.

The latest results are from an Oct. 1-19 Gallup poll showing President Joe Biden's approval rating steady at 42%, though his lowest by one point.

Congress' job approval rating has averaged just 18% over the past decade-plus (since 2010), with individual readings during that time ranging from 9% to 36%. Against that backdrop, today's 21% is about average for this era, even if low for 2021.

Congress' approval is low because hardly any Republicans (5%) and relatively few political independents (22%) offer positive reviews of the legislative body, at the same time that Democrats' approval has plunged to its lowest level in 2021 -- now 33%, down from 55% in September. 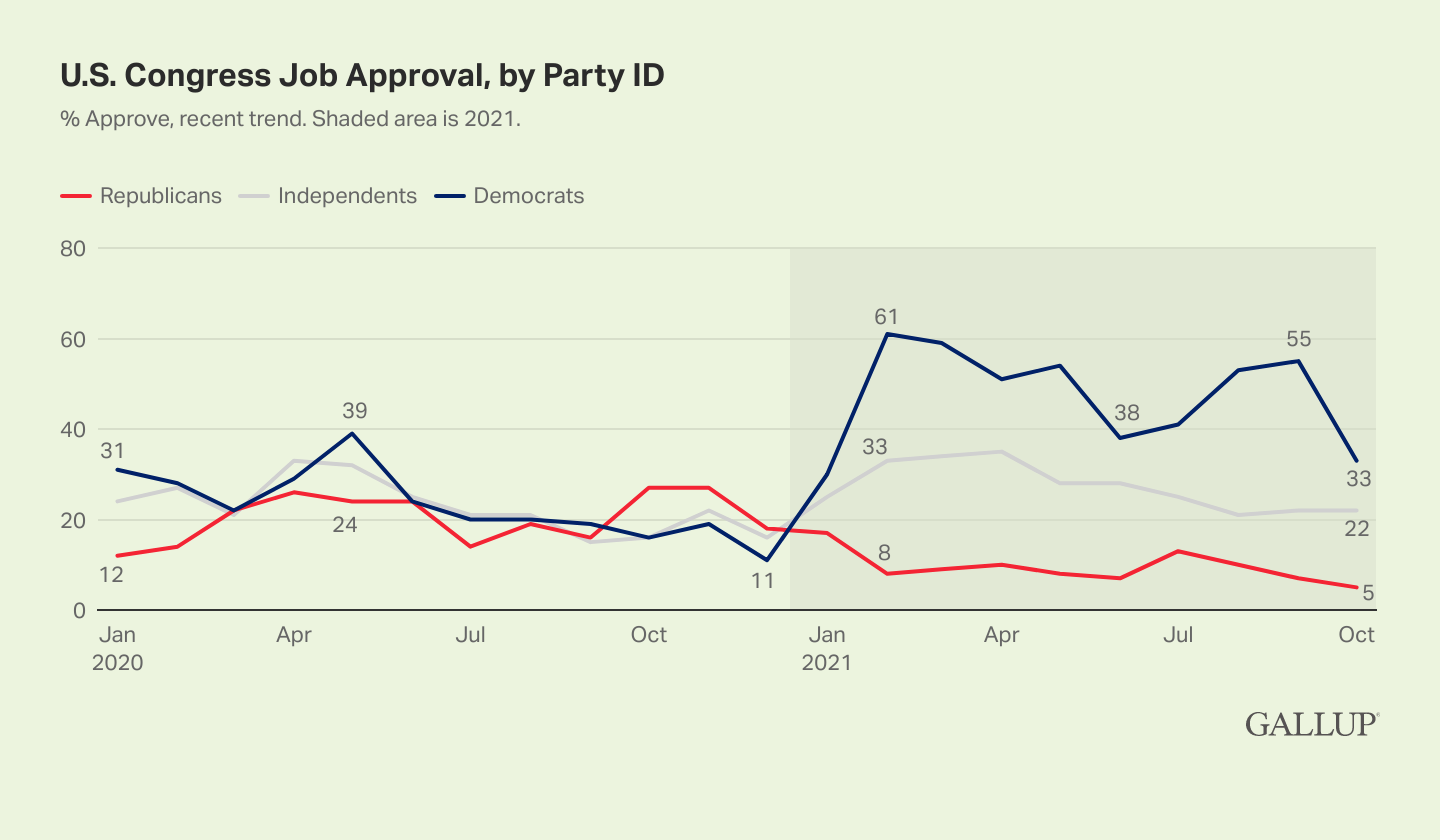 More broadly, most of the variation in congressional approval this year has occurred because of shifts among Democrats.

Republicans and Democrats generally rate Congress more positively when their own party is the majority in both chambers, rather than the minority party or part of a divided government. However, the pattern is particularly pronounced when a party has the trifecta of controlling both houses of Congress and the presidency, as Democrats do today.

In both years, Democrats' approval of the Democratic-led Congress rose sharply between January and February, coincident with the new Congress' and president's swearing-in. It then remained high for several months before dipping in June and falling further in October. Congressional Democrats' delay in passing Obama's healthcare reform plan, the Affordable Care Act, may have dampened Democrats' approval in late 2009, just as Democrats' inability to reach consensus on Biden's major social spending bill appears to be frustrating party members today. 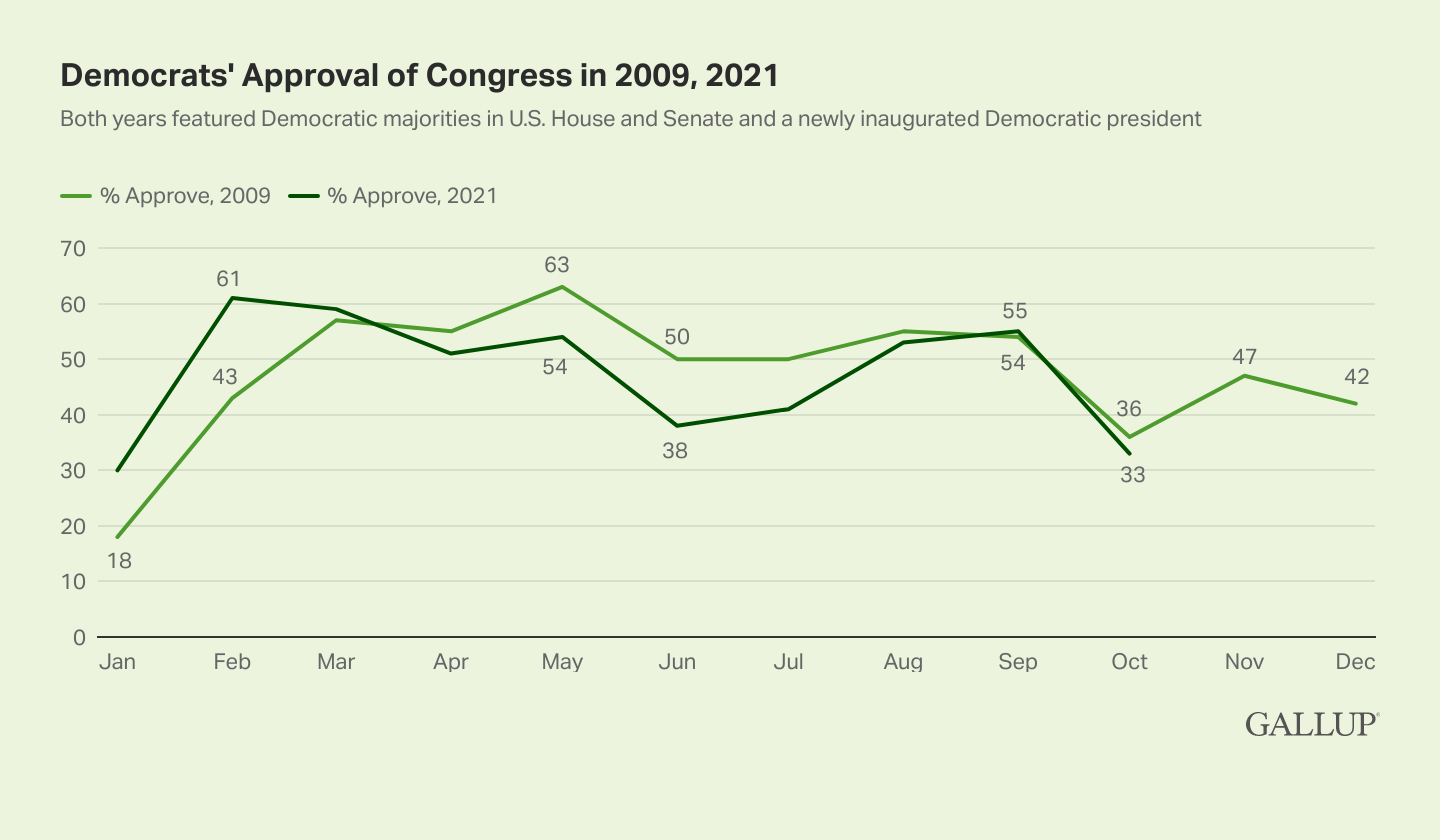 Line graph. Monthly trend in Democrats' approval of Congress in 2009 and 2021. In both years, Democratic approval was above 50% from March through May, then fell to 50% or lower in June, recovered slightly in July and August, and fell sharply in October. 36% of Democrats approved of Congress in October 2009 and 33% approve in October 2021.

While Democrats' approval of Congress in 2009 rose to 47% in November, it declined again in early 2010, averaging 35% for the 10 months leading up to the midterm elections that saw a return of Republicans to power in the House of Representatives. As Gallup posited at the time, Obama's frustration with the lack of legislative action on his agenda, as well as general partisan rancor, may have contributed to Congress' low ratings from Democrats.

As congressional Democrats continue to struggle to reach consensus on the scope of major new social spending, rank-and-file Democrats' approval of Congress has subsided. This is not a new pattern; in fact, it is nearly identical to Democrats' ratings of Congress in 2009, the last time Democrats took the reins in Washington.

With Democrats on Capitol Hill reportedly closer to a deal on Biden's spending bill, Democrats' approval could rebound next month. Whether that persists into 2022 or proves short-lived will depend on whether conflict between different factions in the Democratic caucus continues to stall Biden's agenda or the various sides find a way to unite.