Editor's note: This story has been updated since it was released to reflect the news from the COP26 summit.

WASHINGTON, D.C. -- Heading into the U.N. climate talks currently underway in Glasgow, Scotland, people worldwide were mostly pleased with the efforts in their respective countries to preserve the environment. Sixty-three percent of adults surveyed in 2020 were satisfied.

This percentage is similar to satisfaction levels over the past several years, which have been higher than the levels in most of the years leading up to the Paris Agreement in 2015. 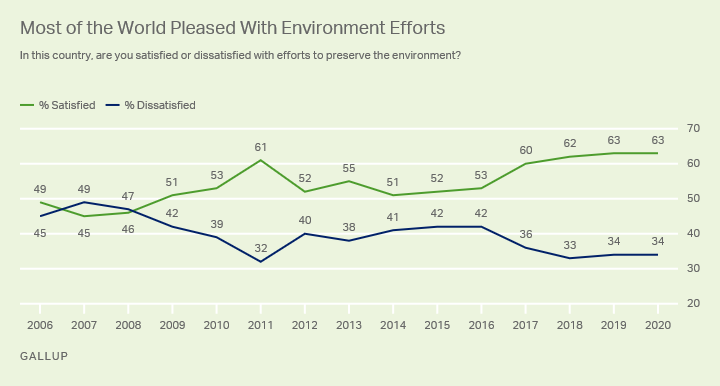 Alt text: Line graph. Trend in global satisfaction with efforts to preserve the environment. More than six in 10 in 2020 were satisfied, compared with 34% who were dissatisfied.

But not everyone is this content. The most recent data available show majorities in a host of top carbon-emitting countries -- many of the same ones issuing new pledges -- were dissatisfied with efforts to safeguard the environment.

Among the top emitters, people were most unhappy in Brazil and Russia, whose leaders opted not to attend the U.N. summit in person. Reflecting Brazil's recent track record on the environment, Brazilians' dissatisfaction soared to a new high of 78% in 2020. And in Russia, which has been criticized abroad for doing too little to fight climate change, 65% were dissatisfied as recently as 2021.

Both Brazil and Russia made new promises at COP26, but it remains to be seen if they will change any minds at home. Brazil, for example, pledged to cut emissions 50% by 2030 and to end and reverse deforestation in the same timeframe. Russia approved a new strategy targeting carbon neutrality by 2060 and also agreed to end and reverse deforestation by 2030.

At the same time, not all people in top-emitting countries are unhappy with their respective country's course of action on the environment. For example, in the first- and third-largest carbon emitters, China and India, strong majorities of residents in 2020 said they were satisfied with efforts in their countries.

So far of the two, only India has offered new pledges at the summit, including targeting 2070 for net-zero carbon emissions and meeting its energy needs by renewable means by 2030. China's leader, Xi Jinping, is not attending the conference but issued a statement urging countries to take stronger action on climate change.

The rest of the world outside of these two big emitters is more evenly divided. About half of the world (without China and India included) is satisfied (49%), while the other half is dissatisfied (48%).

Most Vulnerable Often Most Dissatisfied

Because threats to immediate needs like food and shelter are gradually exacerbated by climate change and environmental catastrophes, people struggling with these problems will be most likely to suffer the consequences of climate change.

Although the high satisfaction among their overall populations may not reflect it, the most vulnerable populations in China and India were more likely to be dissatisfied with efforts to preserve the environment than those struggling less.

Over the next few days, world leaders will work to finalize the draft climate agreement published on Wednesday, but public opinion back home will play an important role in whether they can keep their promises. Among the largest emitters, Russia and Brazil may be under the greatest pressure from their residents to make meaningful commitments.

At the other end of the spectrum, China and India come into the negotiations with the backing of largely satisfied majorities. But even given this dynamic, it is important to remember that broad satisfaction may mask dissatisfaction among the most vulnerable segments of society.

Results from 2020 surveys are based on nationally representative, probability-based samples among the adult populations, aged 15 and older, conducted by telephone throughout 2020.

Results from 2021 are based on nationally representative, probability-based samples among the adult populations, aged 15 and older. Surveys were conducted by telephone.

Many country leaders are offering plans to tackle climate change this week at the United Nations General Assembly, but what grade would their own people give their efforts to preserve the environment so far?

Americans Give Efforts to Preserve Environment a Thumbs Down

Climate change is a talking point ahead of the 2020 election. Less than half of Americans (46%) are satisfied with efforts to preserve the environment.