WASHINGTON, D.C. -- Americans remain much more positive toward capitalism than socialism, and their ratings of each have been largely stable over the past decade-plus. 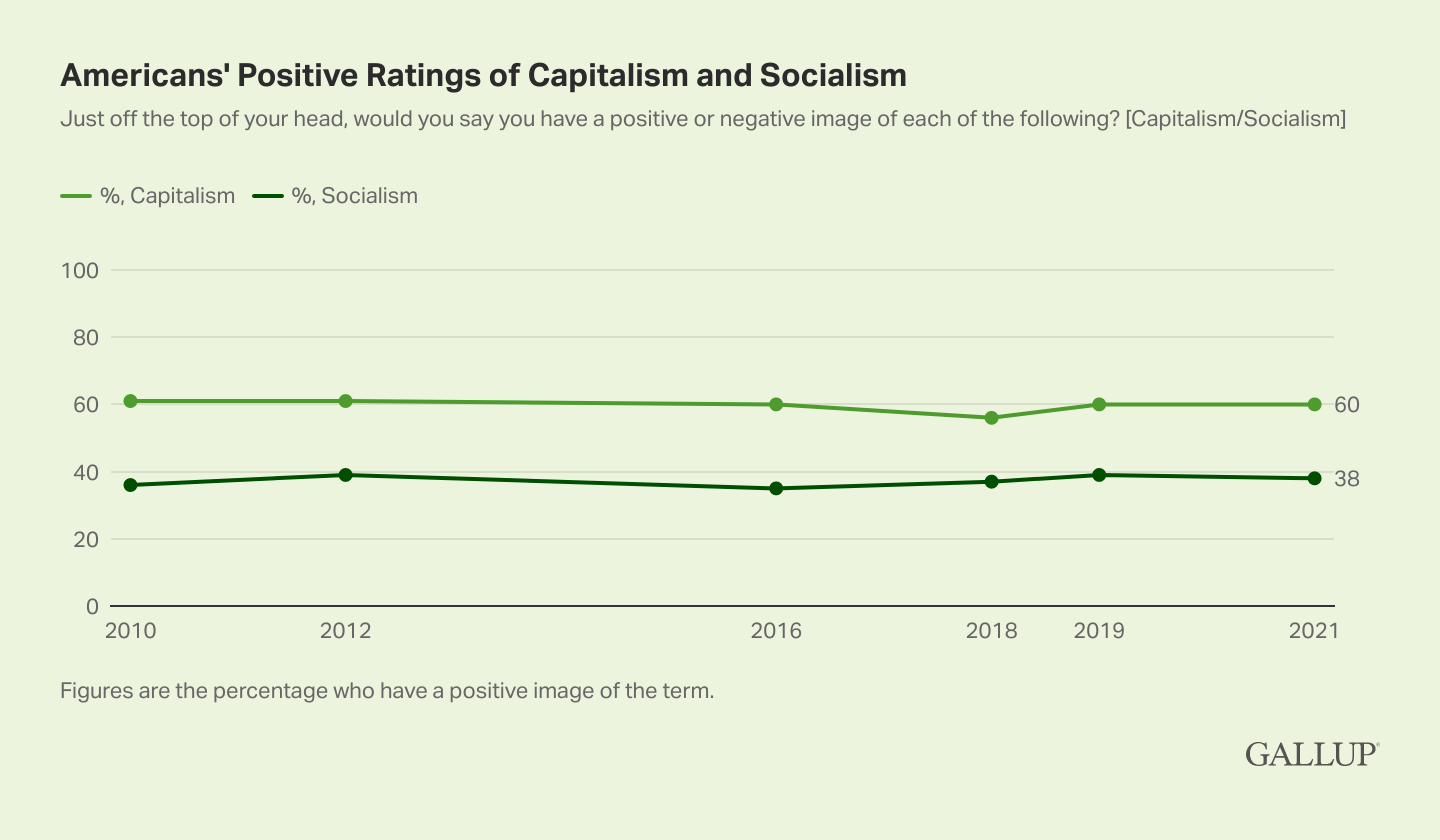 These results are based on an Oct. 1-19 Gallup survey. Since 2010, Gallup has measured Americans' basic opinions of several economic or governmental terms, including capitalism and socialism. Their views of socialism have held steady, even as Sen. Bernie Sanders and progressive Democratic politicians have pursued an expanded government role in addressing healthcare, poverty and early childhood education -- policies their critics describe as moving the U.S. toward socialism. Likewise, Americans' opinions of capitalism have not varied, even with greater discussion of income inequality in the U.S. and the concentration of U.S. wealth in a small percentage of people.

Socialism ties with "the federal government" as the lowest rated of the six terms included in the 2021 survey. In contrast, Americans are most positive toward small business and free enterprise, while they are slightly more negative than positive toward big business.

Gallup has assessed Americans' opinions of these terms on six occasions since 2010. Their opinions on each have not moved much, apart from a significant decline in positive ratings of the federal government over time, from as high as 51% in 2012 to 38% in both the 2019 and 2021 surveys.

This year's survey did show a modest decline in positive ratings of big business, from 52% to 46%, which mirrors declines in confidence in the institution of big business and in satisfaction with the size and influence of major corporations. 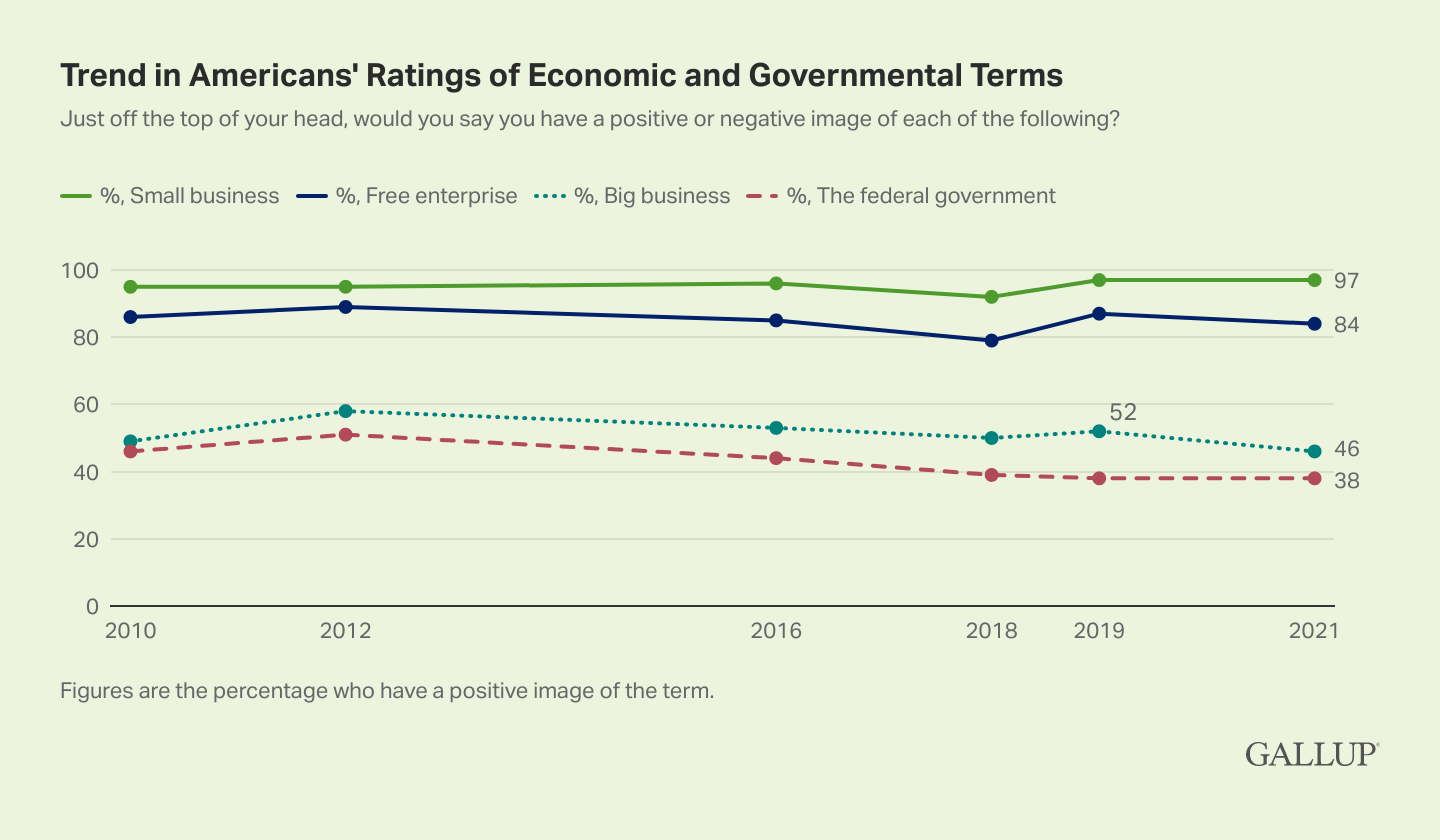 Just as Republicans are responsible for the overall decreases in public confidence in big business and satisfaction with corporate influence, shifting Republican views account for the less-positive perceptions of big business. Currently, 56% of Republicans and Republican-leaning independents, down from 72% in 2019, have a positive opinion of big business. Democrats' and Democratic leaners' views are stable, at 36%. 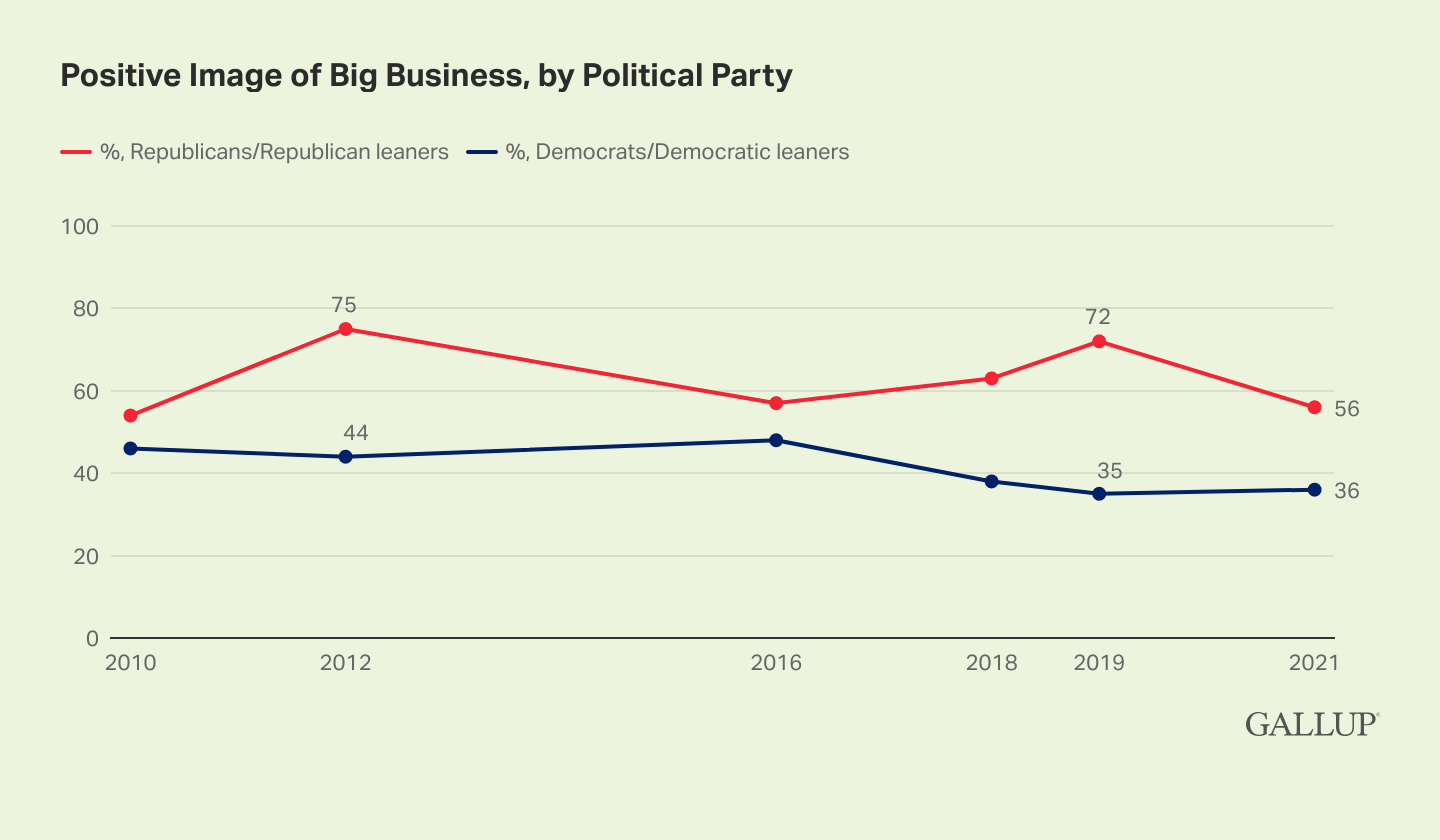 Line graph. Positive images of big business by political party. Fifty-six percent of Republicans and Republican-leaning independents have a positive opinion of big business in 2021. In most years, about 60% of Republicans have had a positive view, except for 2012, when 75% did, and 72% in 2019. Democrats and Democratic leaners have consistently been less positive toward big business than Republicans are, with the latter's percentages slightly above 40% between 2010 and 2016 and slightly below 40% since then, including 36% in the current survey.

Republicans' dimmed views of big business coincide with a period when many Republican leaders and media personalities have publicly criticized large corporations for activism on social issues like racial justice, diversity and inclusion, and climate change. Many Republicans have also spoken out against large technology companies like Twitter and Facebook because they believe those companies are censoring conservative viewpoints.

Even so, Republicans still view big business positively overall, and more positively than Democrats do.

Republicans, Democrats Diverge on Opinions of Capitalism and Socialism 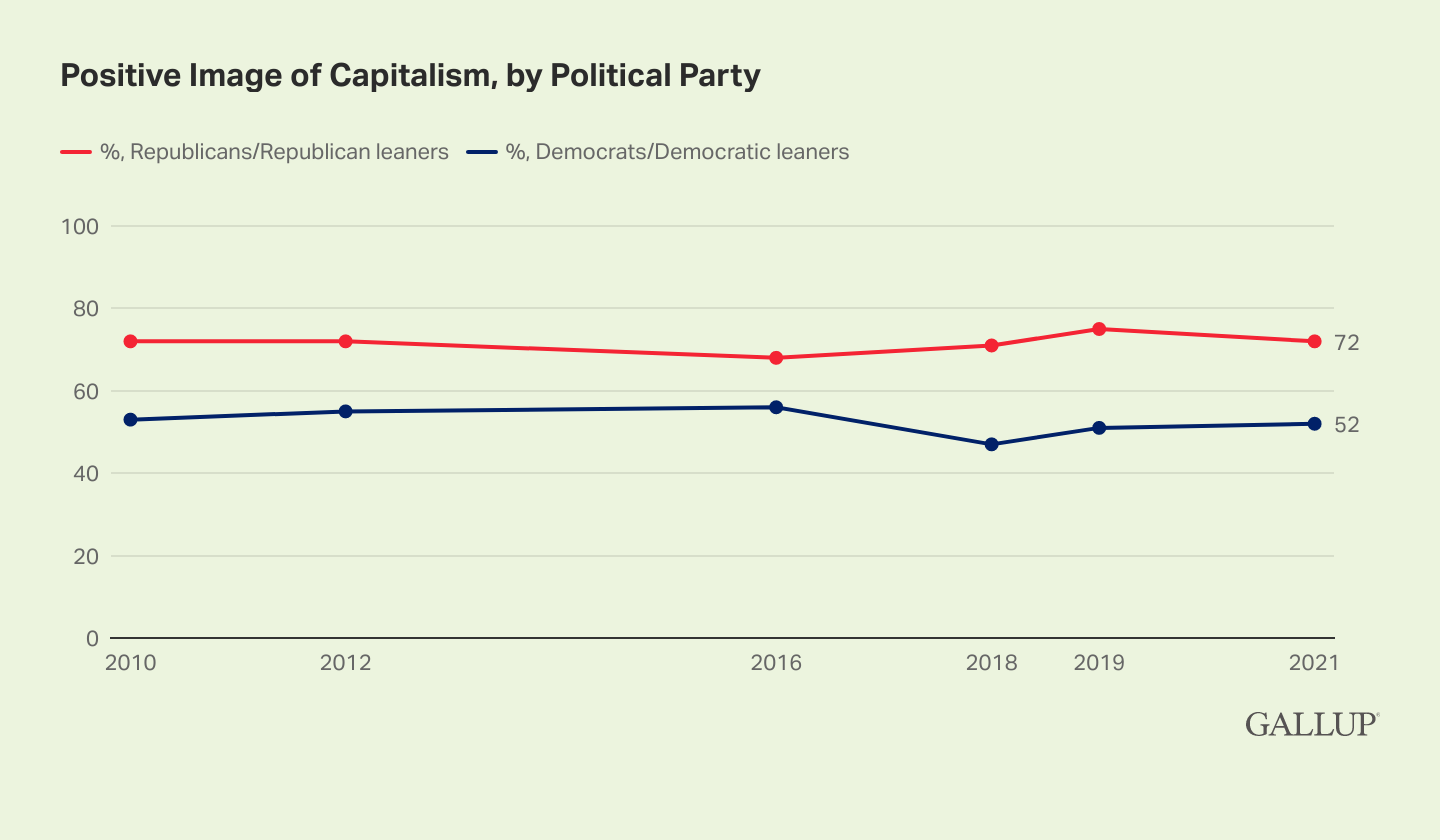 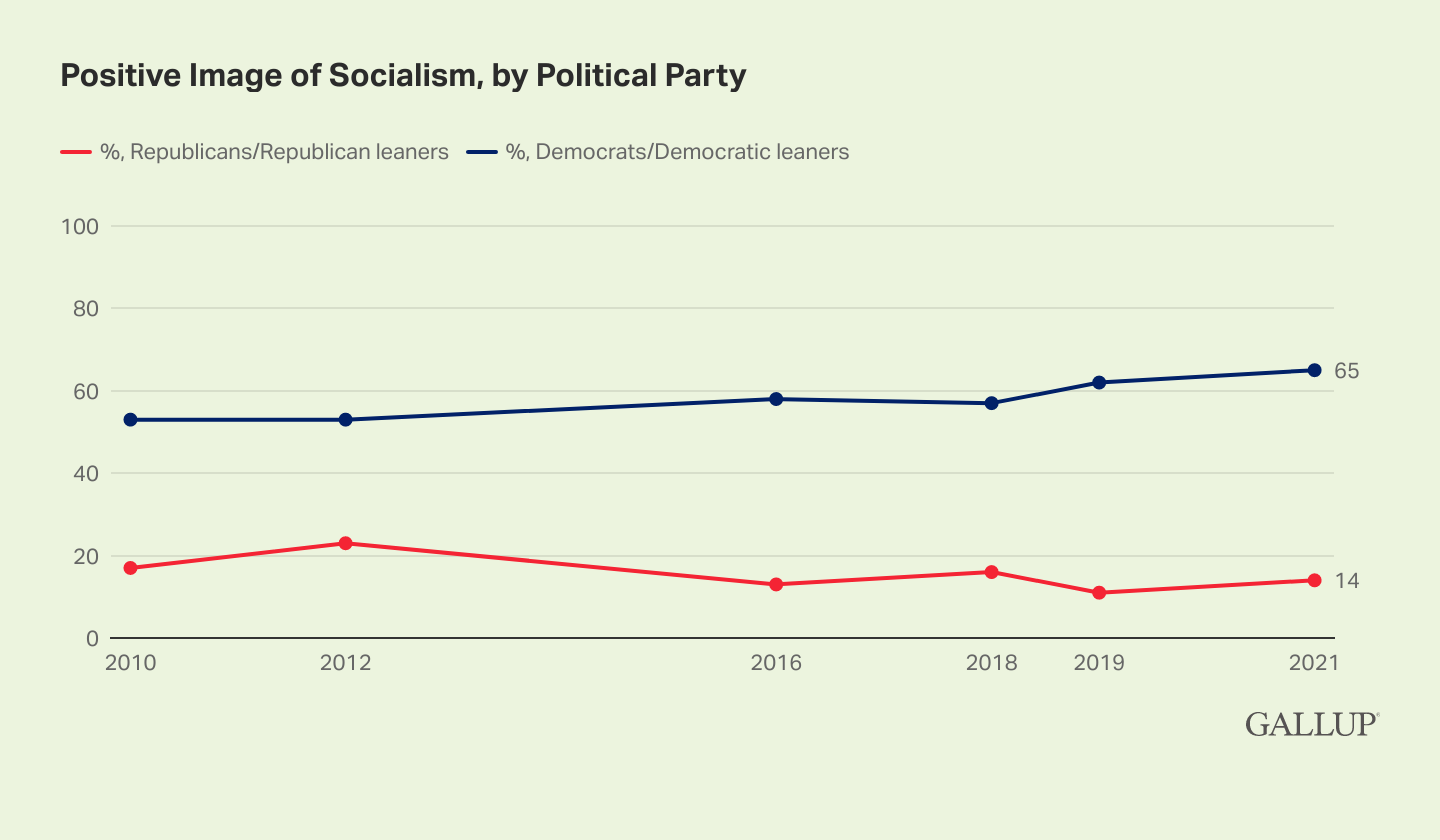 Line graph. Positive ratings of socialism by political party. Sixty-five percent of Democrats and Democratic-leaning independents in 2021 have a positive view of socialism, compared with 14% of Republicans.

Since 2018, Democrats have rated socialism more positively than they have rated capitalism. Before that, they held similar views of the two economic systems.

Recent Gallup research found that Americans, particularly Democrats, are most likely to think of socialism in terms of equality and government provision of benefits and services. When Gallup polled Americans on the meaning of socialism in 1949, the largest proportion described it in the traditional sense as government ownership of the means of economic production. Thus, the meaning of the term to Americans is evolving, but most still view it negatively.