WASHINGTON, D.C. -- A new Gallup poll finds Americans planning to spend an average $886 on Christmas gifts this season. That is slightly more than the amount they predicted a year ago at this time, as well as in 2019. 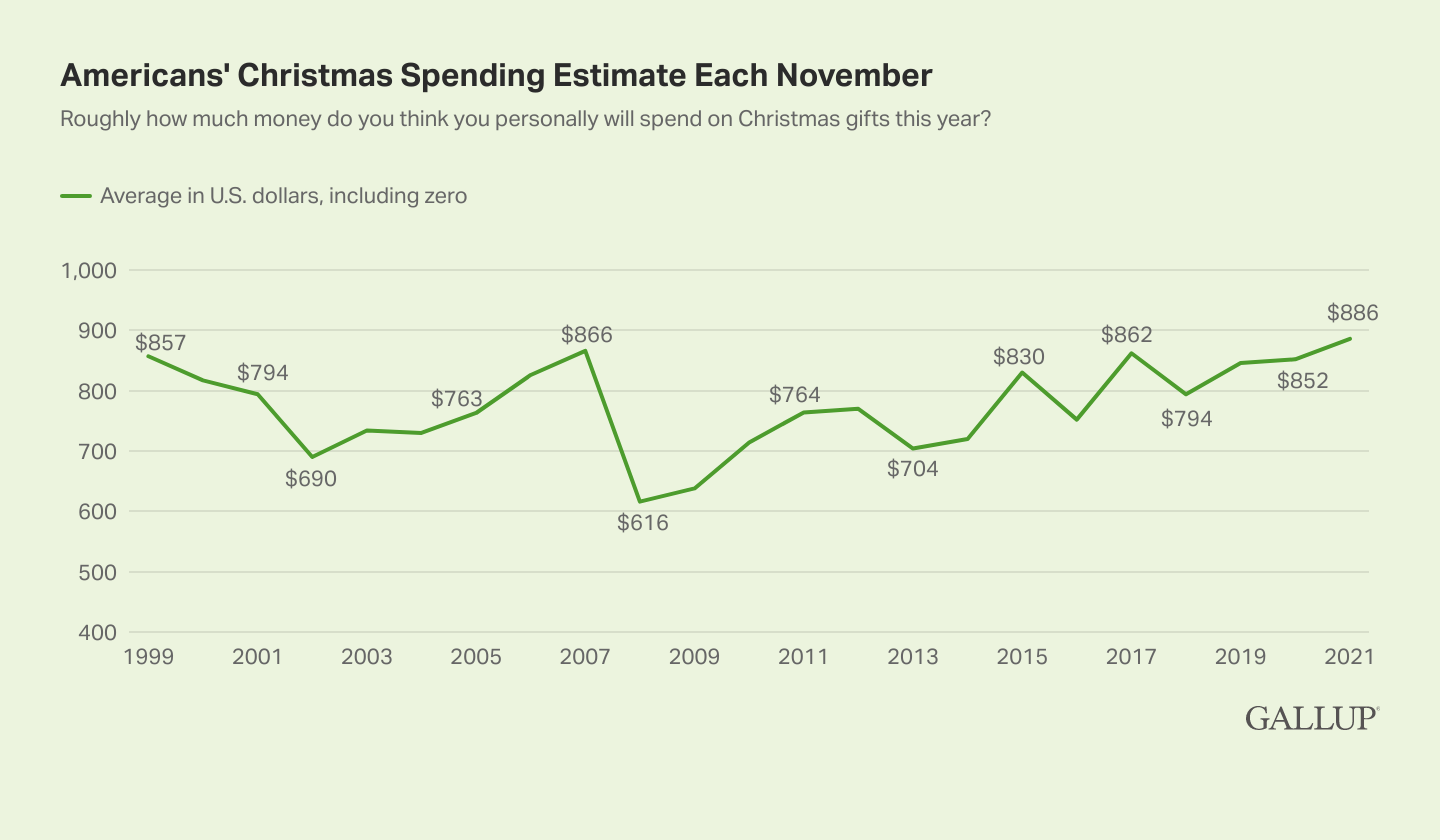 The latest findings, from a Nov. 1-16 survey, are also up slightly from Gallup's October measure of consumers' 2021 holiday spending plans. At that time, Americans planned to spend an average $837 on gifts.

Gallup's trend is not inflation adjusted, so one reason for the increase since 2020 could be consumer awareness that prices are higher this year. Even with that caveat about inflation, Gallup analysis of Americans' November spending estimate suggests that U.S. retail sales this season are most likely to rise by between 3.7% and 5.3% compared with last year. That would exceed the average yearly increase in U.S. holiday retail spending of 3.5% seen since 2000.

Few Got an Early Start on Shopping

Online Shopping Prevails to the Detriment of Department, Discount Stores

The same survey updated a question previously asked between 1993 and 2017 about how Americans do their Christmas shopping.

Currently, 56% of Americans say they are "very likely" to do their Christmas shopping online. That is up eight percentage points from 48% in 2017 and 52 points from Gallup's initial 4% reading in 1998. While some of the recent increase could be a natural extension of the long-term increase in online shopping, it likely also reflects more people adopting the practice during the pandemic. 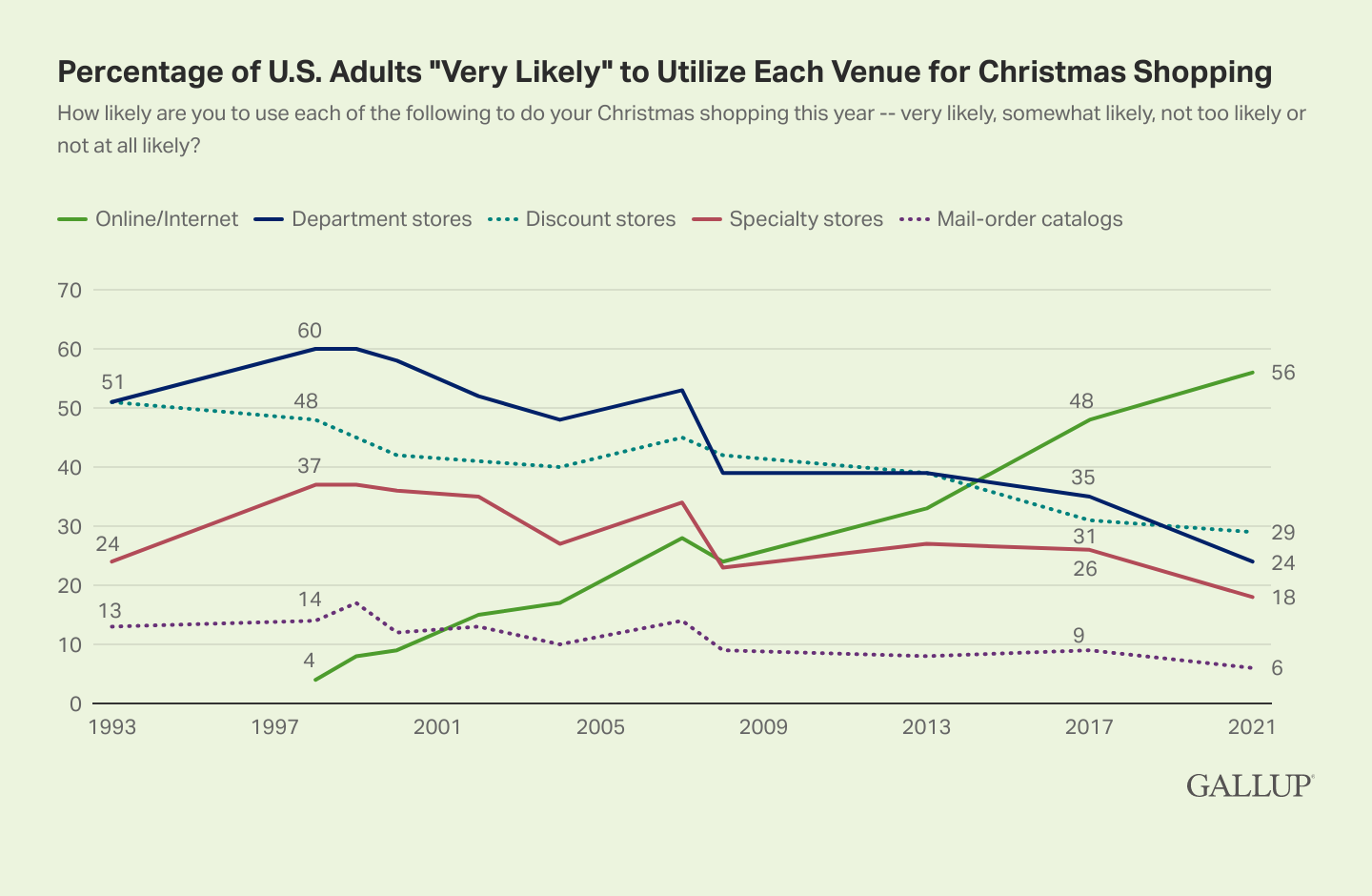 Consumers' stated likelihood of using each of four more traditional shopping methods confirms the dramatic shift toward online shopping that has taken place in the U.S. retail sector over the past quarter century.

The increased likelihood of using department and specialty stores in 1998 and 1999 may have been due to the improved economy at the time, giving consumers greater financial means and confidence to shop at higher-end stores.

The internet is a far less dominant method of Christmas shopping for consumers when one factors in those who say they are "somewhat likely" to use each form of shopping. A combined 76% are very or somewhat likely to shop online, versus 65% at department stores, 61% at discount stores and 51% at specialty stores. Intent to use mail-order catalogs is much lower, at 18%.

A lot of holiday shopping has yet to be done between now and year's end, given that many Americans had not even started -- let alone finished -- as of early to mid-November.

Many factors, most notably inflation and the pandemic, could influence how much consumers spend on gifts this season and where they ultimately shop. But as of November, Americans intended to spend a fairly robust amount that should translate into solid holiday sales for the U.S. economy. While people are mostly inclined to turn to the internet to buy gifts, many have ignored warnings to start early, suggesting that the reality of delayed delivery times and product back orders could send last-minute shoppers into their local stores.