WASHINGTON, D.C. -- Americans' approval rating of the job Congress is doing has fallen to 18%, the lowest point in more than a year, as congressional Democrats' efforts to pass spending and voting rights bills have stalled. The latest five-percentage-point decline in congressional approval is largely attributed to a 10-point decline among Democrats whose frustration appears to be mounting with their party's senators and representatives who hold majorities in both houses of Congress.

As recently as April 2021, congressional approval was at its highest point since 2009, when Democrats last controlled both chambers of Congress and the presidency. After peaking at 36% last spring, approval of Congress has eroded. 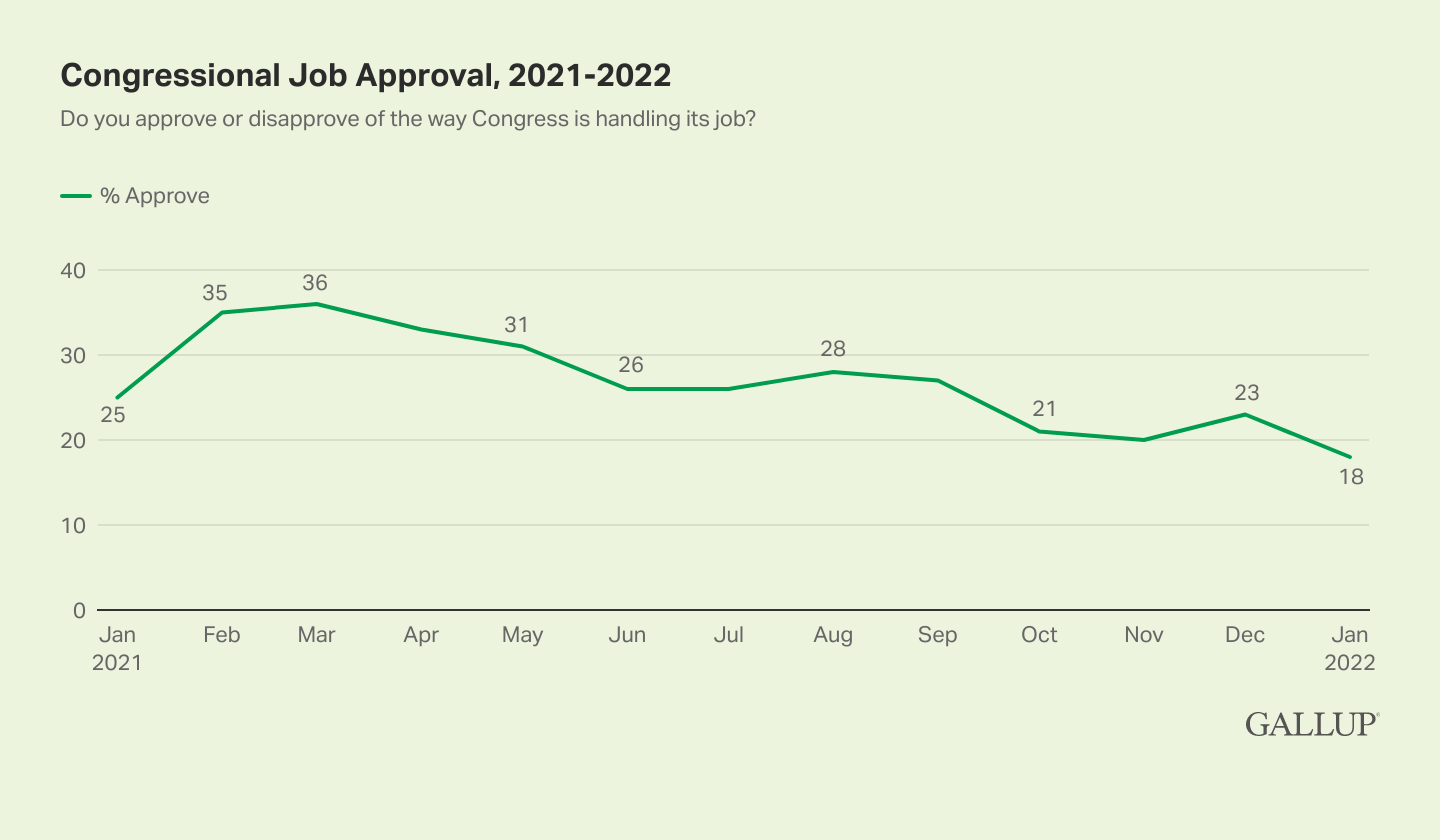 Line graph. Congressional job approval for the 117th Congress from January 2021 to January 2022. The current job approval rating of 18% is down from 23% in December and the 36% high for this Congress in March. 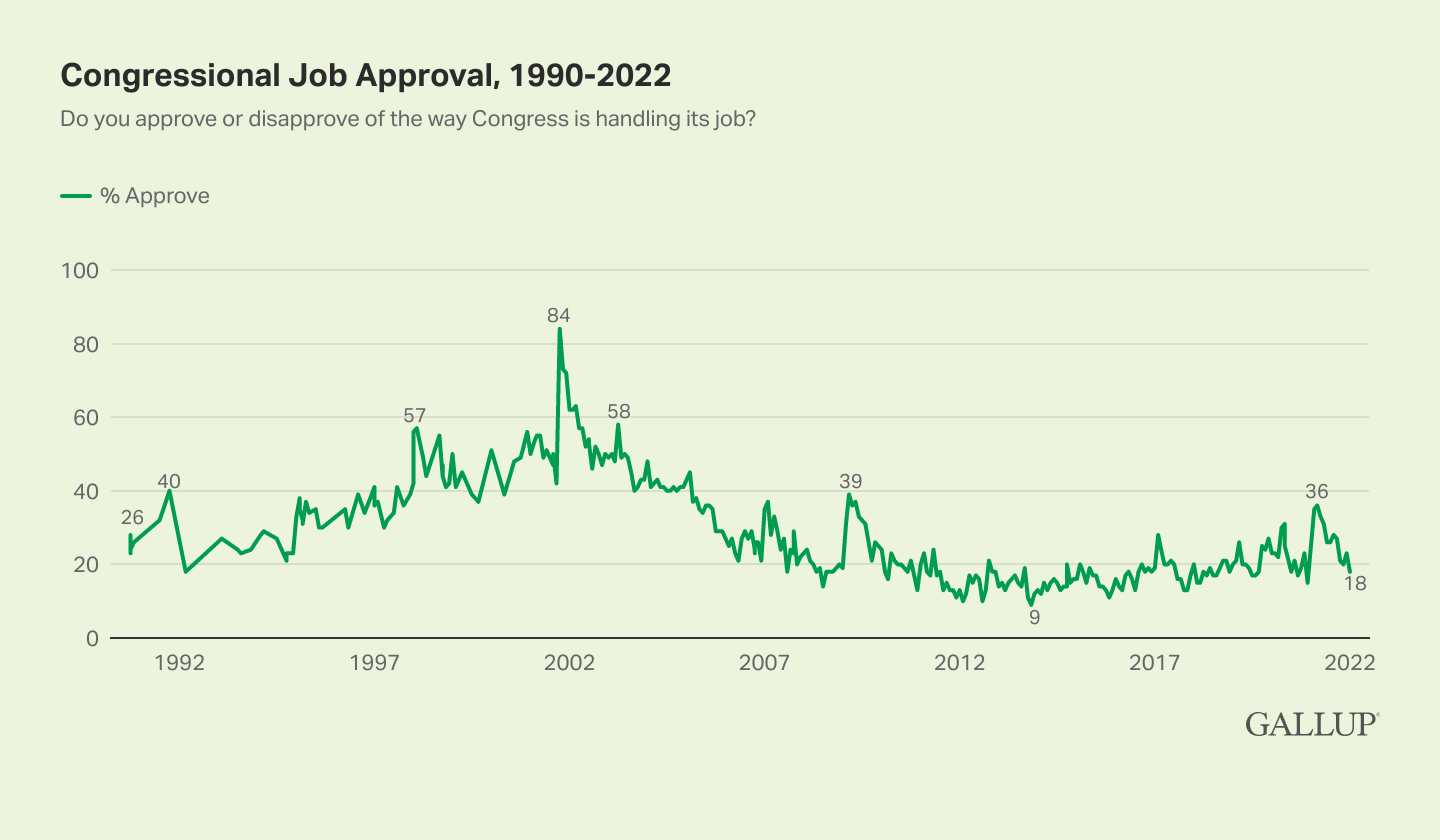 When one party control both houses of Congress, approval of the legislative branch tends to be higher among partisans associated with the majority party than those whose party is in the minority. This was the case last year when rank-and-file Democrats buoyed congressional approval as the 117th Congress was convened. Democrats' approval of Congress rose 50 points between December 2020 and February 2021 when it peaked at 61%. This spanned a period when Congress went from divided control (with Democrats in the majority in the House and Republicans in the Senate) to full Democratic control. Democrats' approval remained high after the American Rescue Plan coronavirus relief law was passed in March.

However, by June, when Congress failed to pass President Joe Biden's infrastructure package by his Memorial Day deadline, Democrats' rating of the body fell below the majority level. After a brief rally above 50% in August and September, Democrats' approval of Congress fell as infighting among Democratic legislators held up passage of Biden's climate change and social spending bill. With Biden's legislative agenda still stalled, Democrats' latest 26% approval of the legislative branch is the lowest it has been in a year.

While independents' approval of Congress rose modestly at the beginning of 2021, it only hit a high of 35% in April before declining. It was subsequently mired between 21% and 28% until this month when it fell five points to 17%.

For their part, Republicans' congressional approval rating has not exceeded 13% since Biden took office. The latest 9% reading is essentially unchanged from last month. The last time that Republicans controlled both chambers of Congress and the presidency, from 2017 through 2018, Republicans' approval of the legislative branch averaged 29% over that period and peaked at 50% in February of 2017. 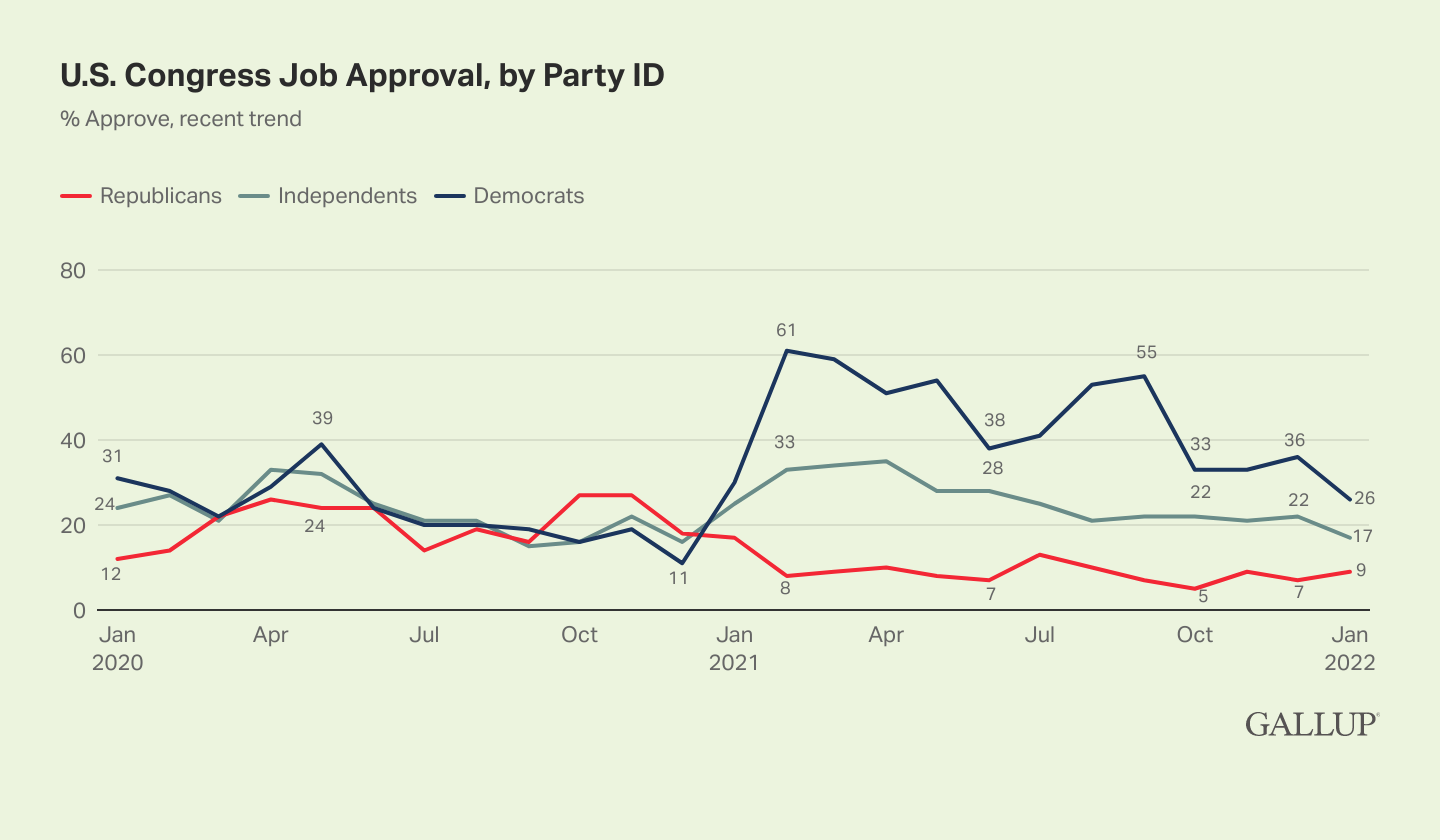 With the midterm elections less than 10 months away, pressure is mounting on Democratic legislators to deliver for their constituents. Democrats may be vulnerable as approval of the Democratically controlled 117th Congress is at its lowest point, and recent legislative failures, including the inability to pass social spending, climate change and voting rights bills have frustrated their party's base.