Feb. 1 marks the first anniversary of the military coup in Myanmar. This article is part of a series on what life has been like for people in Myanmar during the year of turmoil since the military takeover.

WASHINGTON, D.C. -- People's perceptions of personal and media freedom in Myanmar took a dramatic downturn after the coup a year ago. 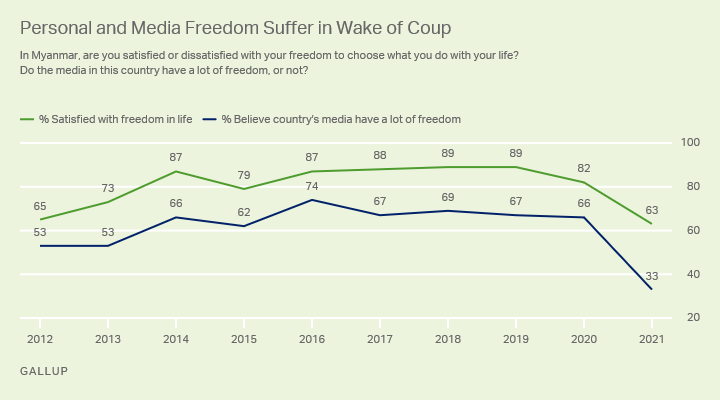 Line graph. Trends showing the downturn in perceived media freedom and personal freedom between 2020 and after the military coup in 2021.

The most recent results come from Gallup's latest survey of Myanmar, conducted Sept. 22-Dec. 2, 2021, after months of pro-democracy demonstrations and devastating conflict between protesters and security forces.

Both measures of perceived freedom rose significantly between 2012 and 2014 amid a series of political and human rights reforms accompanying the country's transition from military rule to democratic governance. Among the most notable developments during that period were the ongoing release of political prisoners, new labor laws that gave union members the right to strike, and the relaxation of media and internet censorship.

Gallup's trends on personal and media freedom in Myanmar remained relatively stable between 2014 and 2020, though watchdog groups such as Freedom House note that human rights violations and repression of the country's Rohingya minority continued under the civilian leadership of the National League for Democracy (NLD).

However, as the public's perceptions of freedom demonstrate, the resumption of military rule triggered widespread fears that the country's hard-won democratic reforms would be reversed. Anti-coup protests began in Mandalay on Feb. 4 and swept the country by Feb. 7. In response, the junta suspended due-process laws that restricted security forces from detaining suspects and searching property.

The junta has also sharply restricted media use as a way to control the information accessible to the country's residents. Shortly after the coup, military leaders blocked commonly used social media platforms, which protesters had been using to share information.

On May 4, junta-controlled media outlets announced a ban on satellite television receivers, which many residents used to access independent and international news programming. Gallup's 2021 poll found that more highly educated residents and those living in urban areas are the least likely to say the country's media have a lot of freedom.

Confidence in Honesty of Elections Also Down Sharply in 2021

On Aug. 1, 2021, Myanmar's top military ruler Min Aung Hlaing declared himself prime minister of a caretaker government and extended the country's state of emergency for another two years, promising to hold a free and fair election by August 2023.

However, most Myanmar residents are now skeptical that legitimate elections can be held; the percentage who say they have confidence in the honesty of elections in the country plunged from 82% in 2020 to 47% in 2021.

Line graph. Trend line showing the downturn in confidence in elections after the military coup in Myanmar.

Just a decade after the country embarked on a path toward greater freedom and government accountability, Myanmar residents face the prospect that those gains will be lost in a new era of authoritarianism. The junta's promise of a return to democracy seems to be ringing hollow in light of the military's ongoing crackdown on protestors and efforts to control residents' access to media.

The dramatic decline in public perceptions of freedom help explain why confidence in the country's government has collapsed, falling from 86% in 2020 to 28% in 2021. Without a quick return to democratic norms, the military government will likely continue to face intense public opposition; having had a taste of greater freedom in their lives, many people in Myanmar appear unwilling to give it up. 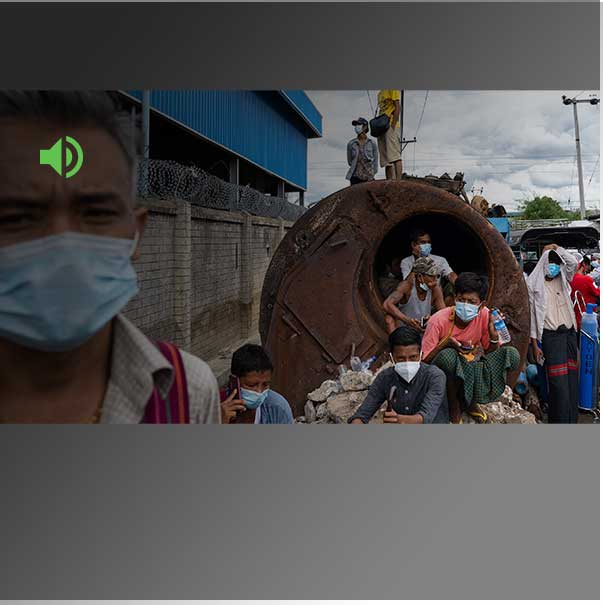