WASHINGTON, D.C. -- Gallup's annual update on marital status among LGBT Americans finds 10% are married to a same-sex spouse, a proportion that has been steady in the years after the U.S. Supreme Court's legalizing of same-sex marriages nationwide. Meanwhile, the proportion of LGBT adults in same-sex domestic partnerships has fallen to 6%, while the percentage identifying as single or never married has risen to 53%. 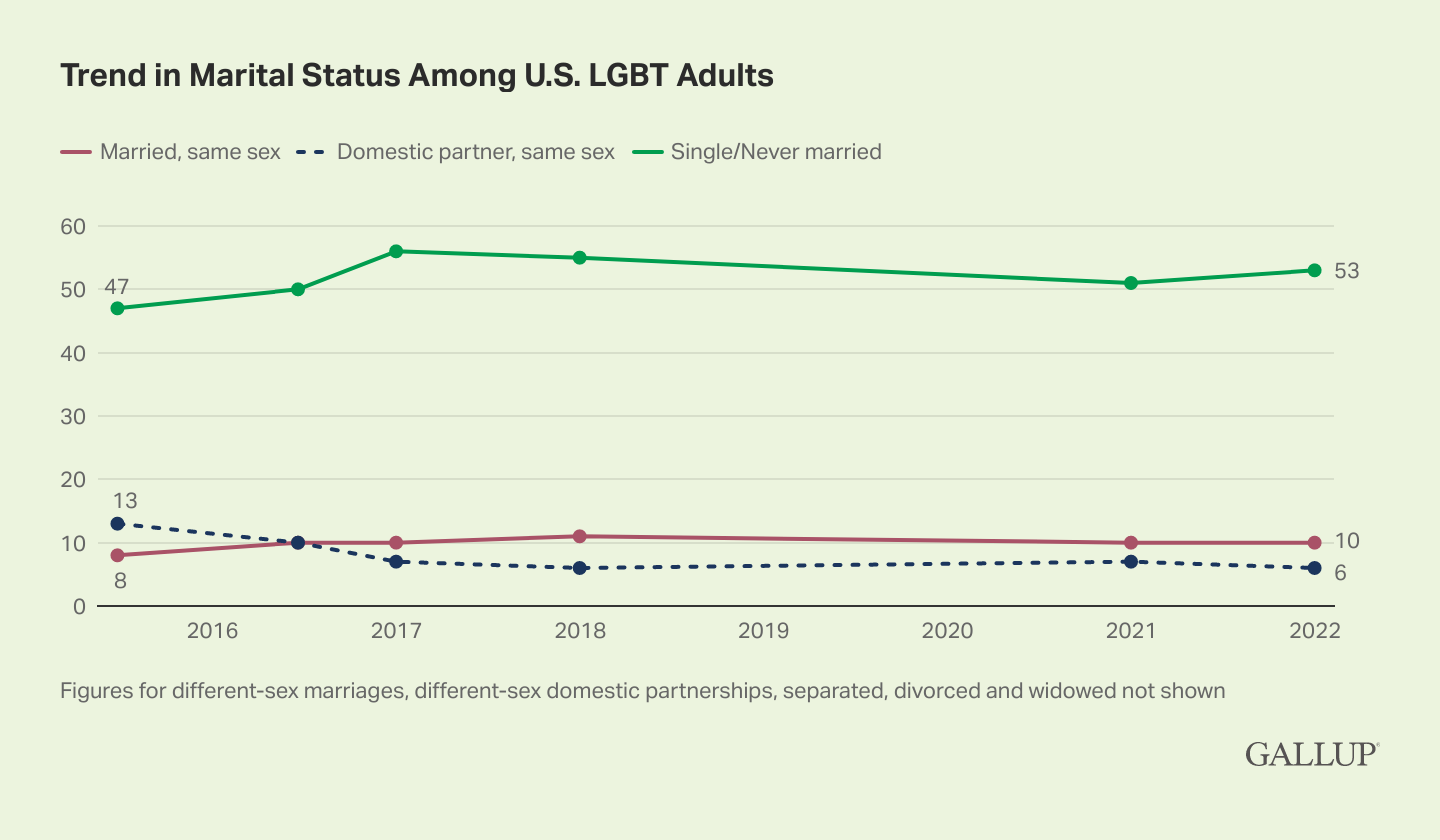 These results are based on aggregated data from 2021 Gallup polls. In each survey, Gallup asks Americans to indicate their marital status and whether they are lesbian, gay, bisexual, transgender or something else. Those who identify as LGBT are then asked if their spouse or partner is the same sex or a different sex. Gallup interviewed over 12,000 U.S. adults in 2021, including 657 who identified as LGBT or something other than heterosexual.

Overall, less than 1% of U.S. adults, regardless of sexual orientation or gender identity, are married to a same-sex spouse (0.7%).

Data collected between January and June 2015, when same-sex marriages were legal in some states but not others, showed an estimated 8% of LGBT adults were married to a same-sex spouse. That proportion increased to 10% in the first year after the June 2015 Obergefell v. Hodges ruling legalized same-sex marriages throughout the U.S.; it has been at that level since.

Over the same period, same-sex partnerships have declined, from 13% before the Supreme Court decision to 10% in the first year after it, to 7% a year ago and 6% in the current survey.

The high rate of single adults within LGBT communities is a result of the fact that LGBT identification is much more common in younger than older generations. All told, slightly more than half of U.S. adults who identify as LGBT are under age 30, and adults under age 30, LGBT and straight, predominantly say they are single (66%).

Among LGBT adults aged 30 and older, 33% say they are single, 18% are married to a same-sex spouse, and 9% are living with a same-sex domestic partner.

Five percent or less of LGBT adults indicate they are divorced, separated or widowed.

Among LGBT adults aged 30 and older, 16% are married to different-sex spouses, and 9% are living with different-sex domestic partners.

The roughly equal proportions of LGBT adults in different-sex or same-sex relationships result from the fact that more than half of LGBT adults in the U.S. identify as bisexual. Bisexual adults are overwhelmingly likely to be married to, or living with, someone of a different sex (32%) rather than someone of the same sex (5%).

In contrast, lesbian or gay Americans are much more likely to be married to (24%) or living with (14%) someone of the same sex. Different-sex marriages (1%) or domestic partnerships (1%) are rare among lesbian or gay adults. As with bisexuals, the largest proportion of lesbian and gay adults (49%) report their marital status as single.

Gallup does not have large enough samples of gay and lesbian respondents to break out estimates for the two groups. However, the data suggest the marital-status figures are generally similar for each group. Gallup also does not have sufficient data to report marital status among transgender Americans or those who prefer some other LGBT identification (such as queer or pansexual).

One in 10 LGBT adults are married to a same-sex spouse, a proportion that has held steady during the years in which all U.S. adults could legally marry a person of the same sex. Still, with a growing U.S. population, and an increasing number of Americans identifying as LGBT, the number of same-sex marriages in the U.S. has likely grown accordingly.

Gallup's earliest estimate, from 2015, indicated that there were 368,000 U.S. same-sex marriages, which grew to 491,000 after the Obergefell decision. The estimate based on the current data would be 904,000 same-sex marriages in the U.S.