WASHINGTON, D.C. -- Before Russia invaded Ukraine, Americans were divided evenly as to whether the U.S. was spending too little (32%), too much (31%) or about the right amount (34%) on the military and national defense. This marks a significant shift from two years ago, during Republican Donald Trump's administration and after significant increases in defense spending, when a record high 50% said spending was about right, while 17% said the U.S. was spending too little. 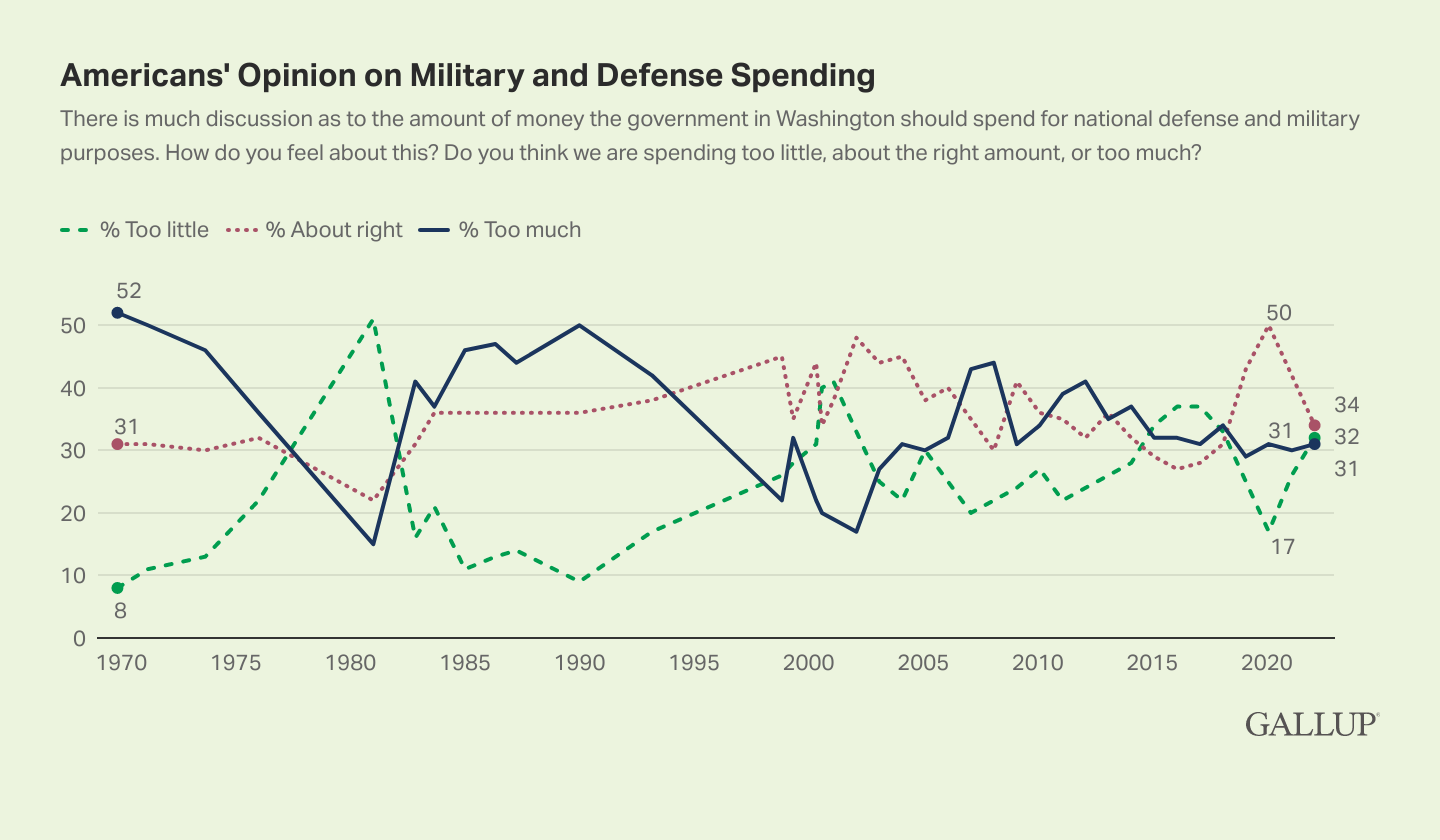 The Feb. 1-17 survey was conducted as Russia was building up forces along the Ukraine border and the U.S. and other nations warned of an invasion. Russia invaded Ukraine on February 24. It is unclear how opinions might have changed since the invasion occurred.

Previously released Gallup data from the same poll showed that two-thirds of Americans believe it is important the U.S. be number one in the world militarily, and that about half say that the U.S has the top military in the world.

Americans' opinions about defense spending have varied since Gallup first asked the question in 1969, usually in response to conditions that affect the military and the national defense. For example, pluralities said the U.S. was spending too much on defense in the late 1960s and 1970s during the Vietnam War era and in 1990 after the Cold War between the U.S. and Soviet Union ended.

Fewer in U.S. Say Strength of Defense Is "About Right"

A separate question in the survey finds that most Americans believe the U.S. national defense is not strong enough (42%) or that its strength is about right (44%). Twelve percent say it is stronger than it needs to be.

These attitudes, too, have shifted in the past two years. In 2020, 62% said the strength of the U.S. defense was "about right," two-percentage-points shy of the historical high recorded at the end of the Cold War.

Current opinions about the strength of U.S. defense are similar to those recorded near the end of the Barack Obama administration and the beginning of the Trump administration between 2015 and 2017. 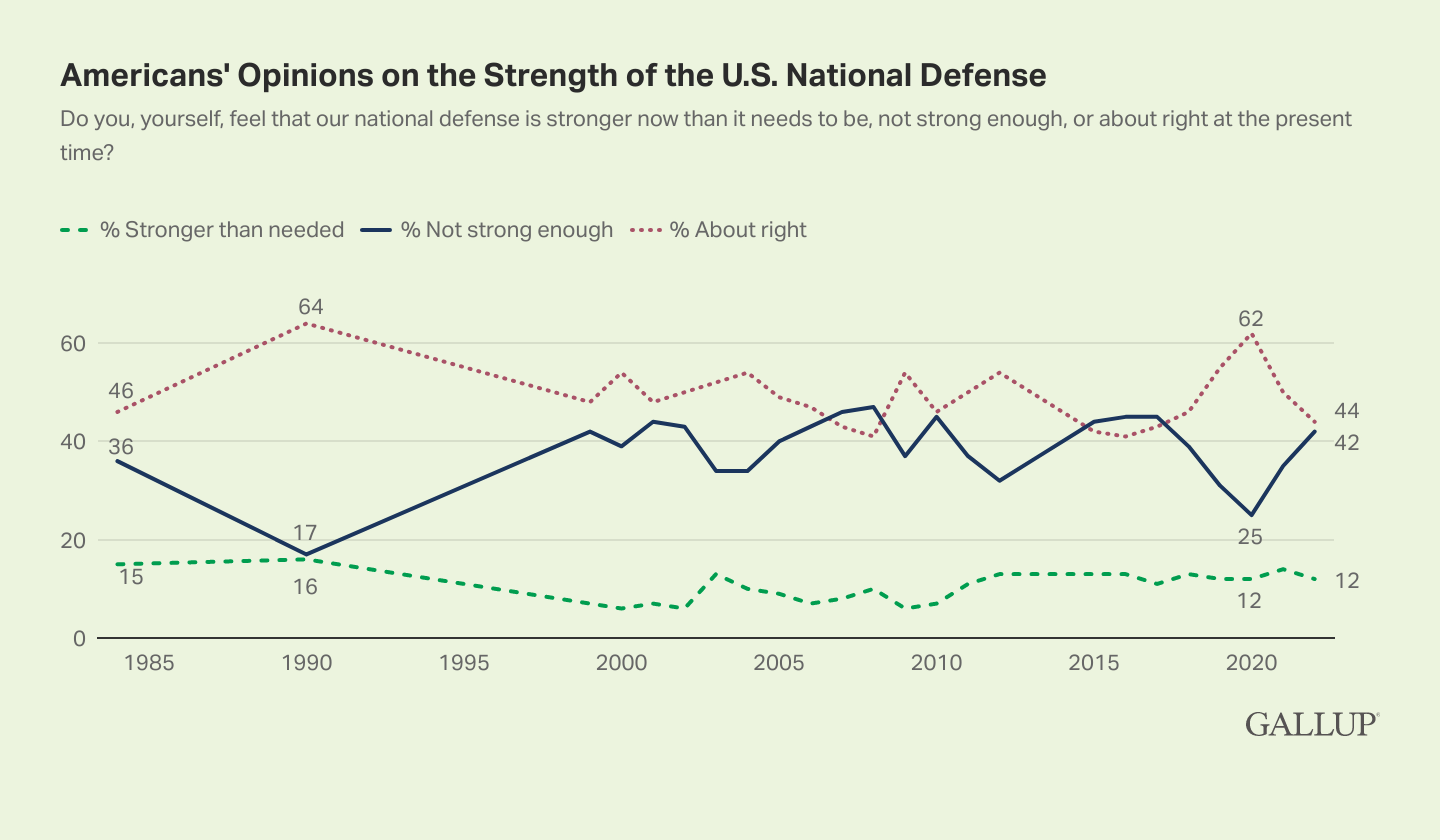 Line graph. Trend in Americans' opinions on the strength of the U.S. national defense. Americans have typically been fairly divided about whether the U.S. defense was not strong enough or about right. The major exceptions were in 1990 and 2020. Historically, relatively few have said the U.S. defense was stronger than it needs to be.

Republicans Mainly Responsible for Shifts in Views on Defense

Democrats' opinions on defense spending have mostly been stable, although there has been a slight decline in the percentage in the group who say the U.S. is spending too much on defense.

More independents now than in 2020 say the U.S. is spending too little on defense, with most of that increase being offset by a decline in the percentage saying the U.S. spends too much.

The vast majority of Republicans, 79%, now say that the U.S. national defense is not strong enough, whereas in 2020, most Republicans said it was about right.

Independents' opinions have moved in the same direction as Republicans' but to a far lesser degree.

Democrats are slightly more inclined now than in 2020 to say the U.S. defense strength is "about right."

Prior to the Russian invasion of Ukraine, Americans were evenly split as to whether the U.S. was spending too much, the right amount or too little on the military and defense. They were also evenly divided on whether the U.S. defense was not strong enough or about right.

Historically, Americans' attitudes about defense and the military have varied according to current U.S. policy and international and domestic events. So far, the U.S. military has not been directly involved in the Russia-Ukraine war. The U.S. and its allies are using economic sanctions against Russia and military aid to Ukraine to try to end the hostilities, hoping to avoid a larger war that would involve the U.S. and other NATO countries.