WASHINGTON, D.C. -- Americans generally regard terrorism, the development of nuclear weapons by unfriendly countries, and China's military power as the most critical threats to U.S. vital interests.

Specifically, 82% of U.S. adults identify cyberterrorism as a critical threat, while 71% say the same about international terrorism and 68% about domestic terrorism. More than three-quarters each believe Iran's and North Korea's development of nuclear weapons is a serious threat to the U.S. Two-thirds say the same about Chinese military power, while 57% identify China's economic power as a threat.

At the time of the survey, conducted in the weeks before Russia invaded Ukraine, 59% of U.S. adults regarded Russia's military power, and 52% said the Russia-Ukraine situation, represented critical threats to the U.S. As Gallup has previously reported, both measures are higher than they were in prior years.

The Feb. 1-17 Gallup poll also found that majorities of U.S. adults perceive the spread of infectious diseases throughout the world and global warming or climate change as critical threats.

China, Cyberterrorism Seen as Greater Threats Than in Past

Gallup first asked about critical threats to U.S. vital interests in 2004 and has repeated the question in most years since 2010.

Terrorism and nuclear weapons have typically been the greatest concerns. However, in recent years there has been slightly diminished concern about international terrorism and greater concern about cyberterrorism. Gallup asked about domestic terrorism for the first time this year. 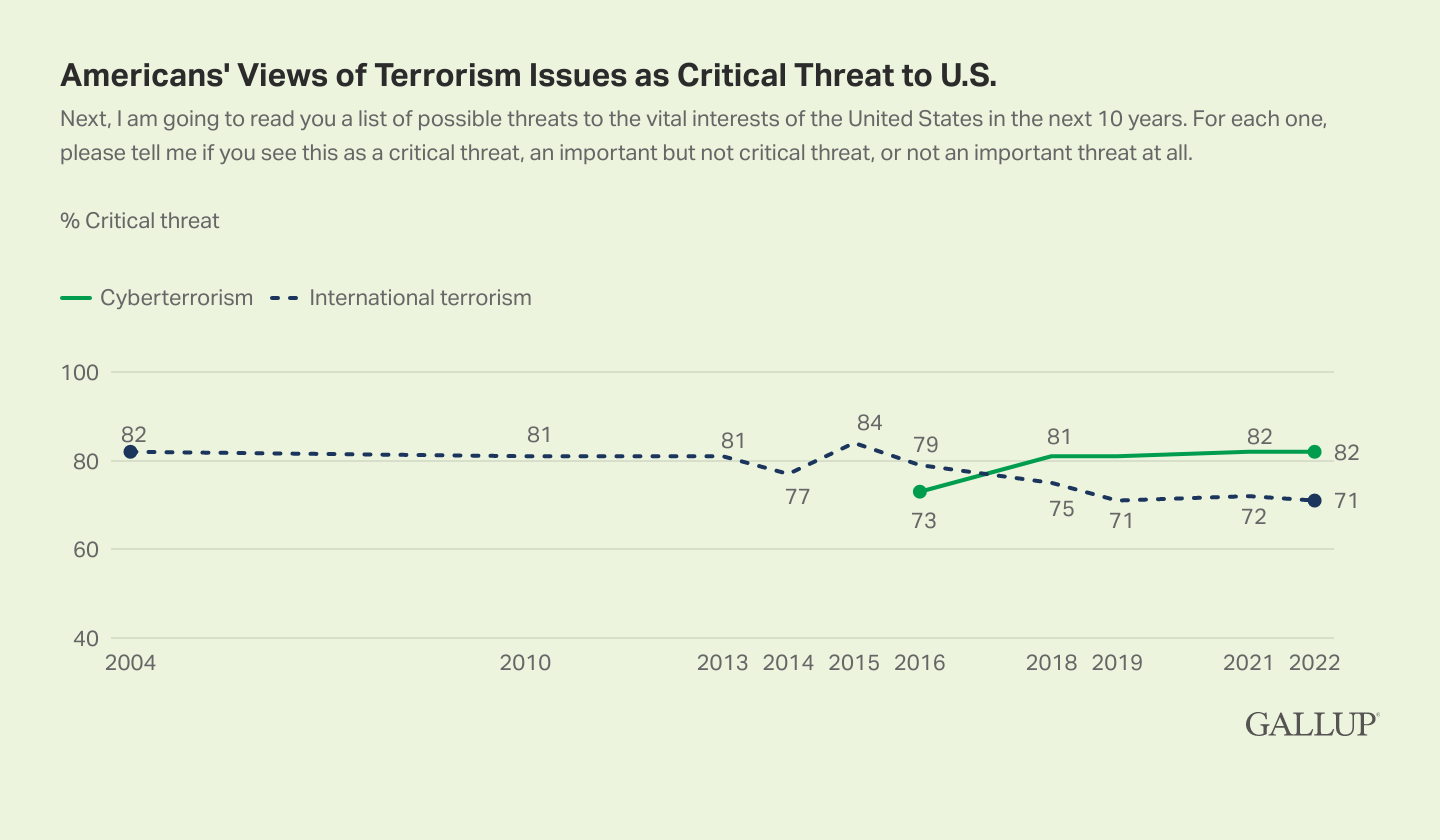 Americans have also come to see China as a greater threat, both economically and militarily, than in the past. The 67% who currently view China's military power as a critical threat is the highest in Gallup's trend, 16 percentage points above the prior high from 2013 and 26 points higher than the previous measure, in 2016. 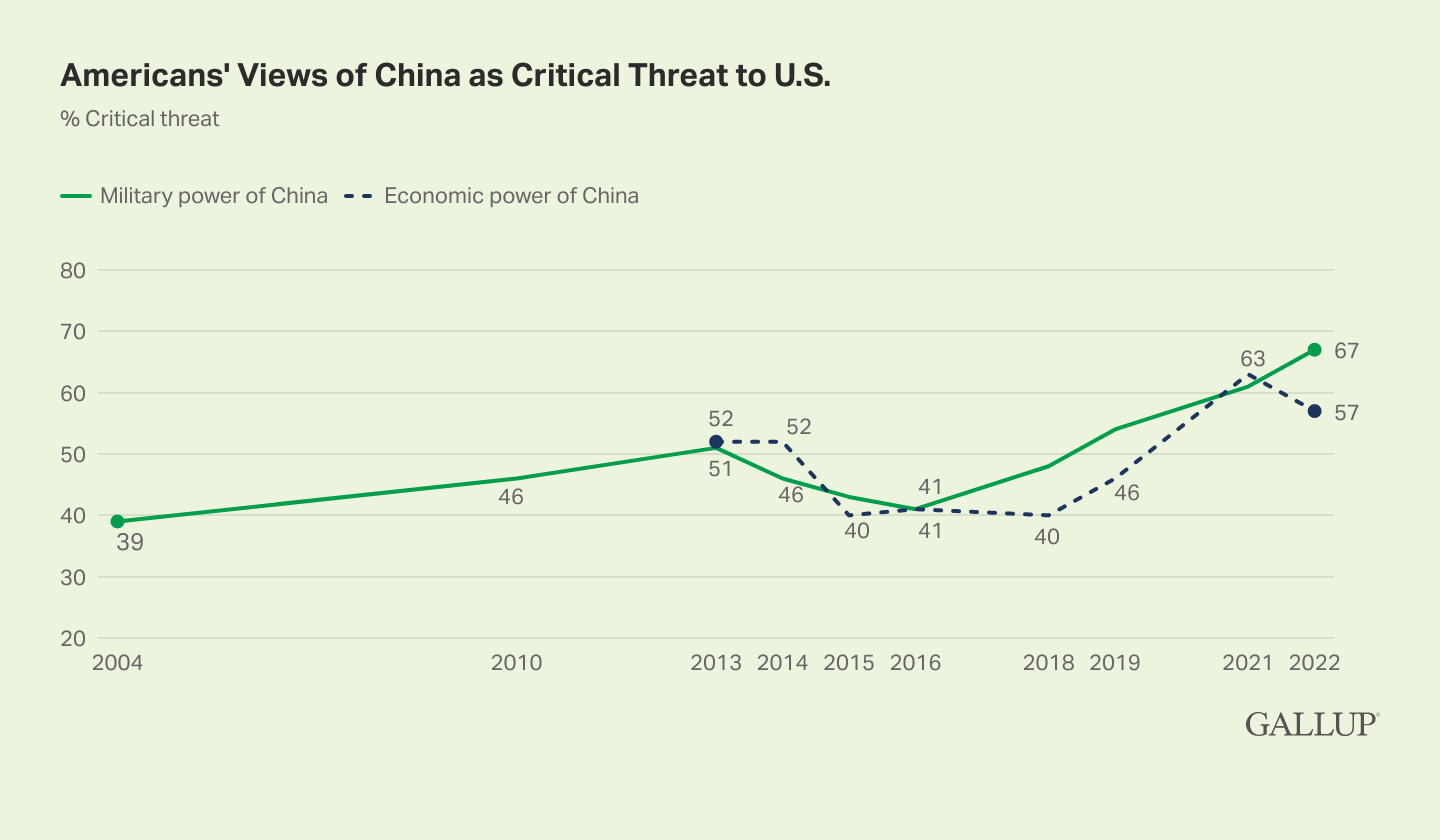 The increases in the perceived threat of China have come as Americans now view China as the United States' greatest enemy, an opinion held by 49% of respondents in the latest poll and 45% in last year's poll. Russia is second at 32% in the 2022 poll and was 26% in the 2021 poll. It is unclear how Russia's invasion of Ukraine may have changed Americans' opinions on which country is the top U.S. enemy.

In addition to shifts in the perceived threat of terrorism and China, other notable changes in Americans' views of international situations include:

Independents' opinions are closer to those of Republicans on the spread of infectious diseases, while independents align more closely with Democrats on illegal immigration, China's economic and military power, Iranian nuclear weapons, and international terrorism.

Among key international challenges facing the U.S., terrorism and nuclear weapons have typically stirred the most concern in Americans. Other international matters have become greater or lesser concerns, depending on how the situations are evolving. This year, as Russia was building up forces outside Ukraine's borders but before it invaded the country, more Americans than in past years saw Russia's military power and the Russia-Ukraine situation as a threat to the U.S. In recent years, as tensions between China and the U.S. have grown over trade and other matters, more Americans have also come to see China as both a critical economic and military threat to the U.S.