skip to main content
Politics
About Half Say U.S. Military Is No. 1 in the World

WASHINGTON, D.C. -- About one in six Americans (16%) say the U.S. is No. 1 in the world economically, rather than just one of several leading economic powers. They are much more likely to view it as the No. 1 military power (51%), a consistent pattern in Gallup's trend dating back to 1993. 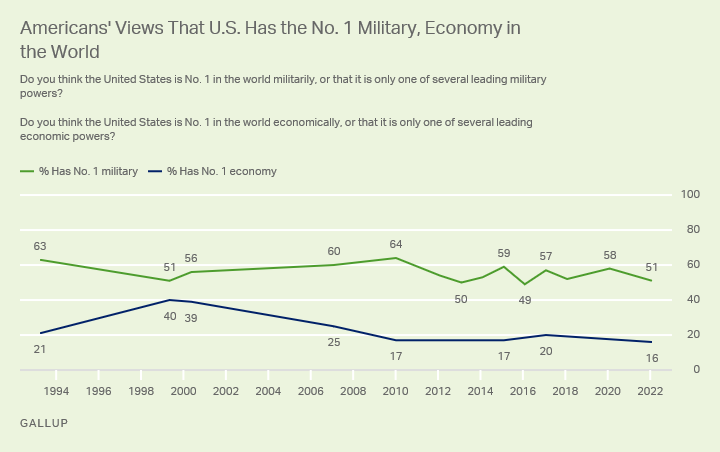 These data are from Gallup's annual World Affairs survey, conducted Feb. 1-17 -- prior to Russia's invasion of Ukraine. It is unclear whether these attitudes would be affected by the conflict since the U.S. military is not directly involved.

Perceptions of the U.S. military as the leading global power have fluctuated over recent decades, between 49% and 64%, averaging 56%. The current figure is down seven percentage points from the prior measure in 2020. This decline could be at least partly influenced by the U.S. military's chaotic withdrawal from Afghanistan last summer.

In contrast, most Americans have consistently viewed the U.S. as being one of multiple global economic powerhouses -- rather than the No. 1 economic power -- over this same period. While the latest 16% is, by one point, the lowest in the trend, it is statistically similar to the previous lows of 17% recorded in 2010 and 2015. Americans were more than twice as likely as they are now to view their country as the economic leader in 1999 and 2000, during the dot-com boom.

Most Say U.S. Military Superiority Is a Priority

More than two in three Americans say it is important for the U.S. to be No. 1 militarily. Most Americans have viewed this as a priority throughout the question's trend, which began in 1993. The current figure is on the high end of the 59% to 70% range recorded in that time. 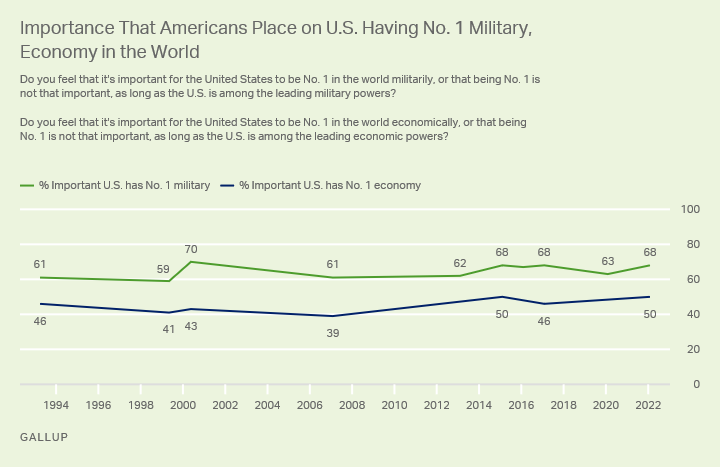 Americans' views of U.S. military and economic superiority are largely influenced by how they view the country's current standing in these realms -- those who say the U.S. is No. 1 are more likely to view it as important to be No. 1.

Regardless of how they view the current status of the U.S. military, majorities of Americans say it is important for the nation's military to reign supreme. But those who believe the U.S. military already is No. 1 (74%) are consistently more likely to view it as a priority than those who view the U.S. as merely one of several leading military powers (55%).

Meanwhile, about two in three Americans who say the country is No. 1 economically in the world (68%) see this as important, while those who say the U.S. is not economically dominant are almost half as likely to agree it is a priority (38%).

As Gallup has previously reported, Republicans are more likely to prioritize U.S. dominance, both militarily and economically.

In the latest poll, 88% of Republicans say that being the leading military power is important, while much smaller majorities of independents (64%) and Democrats (55%) agree.

And while two in three Republicans (67%) prioritize economic superiority, less than half of independents (47%) and Democrats (38%) view this as a national priority. The gap between Republicans and Democrats has widened to 29 points on this measure; in 2000, just seven points separated the two groups. Democrats have been fairly consistent in their view of the importance of the U.S. being economically dominant, ranging from 38% to 43% holding this view since 2000. Republicans, on the other hand, have become more likely over time to see this as important. In 2000 and 2007, about half of Republicans held this view -- but it increased to more than six in 10 in the mid-2010s, and now about two in three view it as important.

The U.S. economy and the role of the nation's military are in a state of transition, as the country recovers from the economic trauma of the COVID-19 pandemic and as U.S. troops have been out of Afghanistan for six months now.

While Americans are fairly negative in their assessments of the U.S. economy, they are mixed on whether the country should aspire to be a global economic power.

They do, however, see their military as one that needs to stand above all others, despite their mixed views on whether it currently does. And the Russian attacks on Ukraine may influence how they view their military and the importance of its dominance in the future.