WASHINGTON, D.C. -- Although the world's attention has shifted to the exodus of Ukrainians fleeing the war, hundreds of thousands of Afghans -- if not more -- have fled their country since the Taliban seized power in 2021. Millions more Afghans would leave if they had the chance, according to Gallup surveys conducted last year as the U.S. withdrew and the Taliban took control.

The percentage of Afghans who said they wanted to leave their homeland for good surged to a record-high 53% in August and September of last year. This percentage, one of the highest in the world in 2021, is potentially even higher now, with millions on the brink of starvation since the Taliban's takeover. 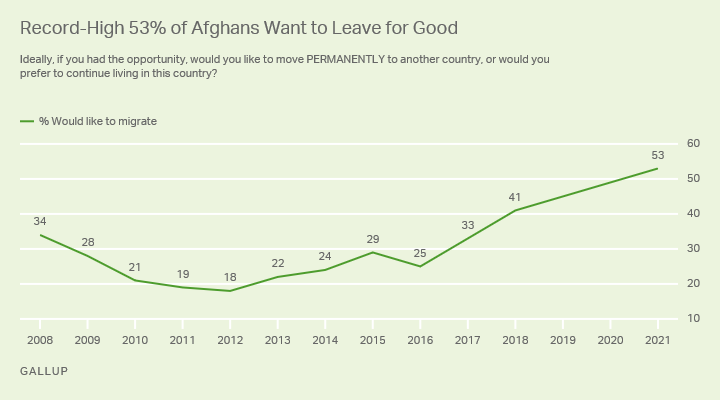 Line graph. Trend line showing Afghans' desire to leave their country permanently if they could. Desire hit a record-high 53% in 2021 as the Taliban regained control of the country.

Gallup knows from its previous research that more people say they would like to move than end up moving. However, the 15-percentage-point spike in the percentage of Afghans who would like to move is likely to fuel concerns in the region and Europe about a repeat of the 2015 migrant crisis -- on top of the ongoing situation with Ukraine.

Who Wants to Leave Afghanistan?

The surge in Afghans' desire to leave their country is evident in almost every demographic but is particularly strong among Afghan men and those with more than a primary education. Between 2018 and 2021, the percentage of men who said they would like to leave shot up 21 points, from 35% to 56%. And over the same period, the percentage of Afghans with more than a primary education who wanted to leave increased 22 points from 40% to 62%.

Where Do Afghans Want to Go?

Afghans' preferences for where they would like to go if they could leave have shifted somewhat since 2018, but Turkey, Germany, Canada and the U.S. still top the list for their most desired destinations.

Far and away, Turkey is the ideal destination for potential migrants from Afghanistan -- 25% said they would like to move there. Fifteen percent mentioned Germany and 12% said Canada, up from 7% in 2018.

Although the U.S. was in the process of withdrawing from the country during the survey, the 10% of potential migrants who named that country was statistically no different from previous years.

The majority of Afghans who wanted to flee their country last year speaks to the desperation many felt as the Taliban regained control of Afghanistan. But with millions of Ukrainians flooding into Europe and elsewhere, the world's attention has largely shifted away from Afghanistan. This shift has spurred concerns that the plight of Afghan refugees is being forgotten, although the humanitarian crisis in that country is far from over -- and, in many respects, is getting worse.